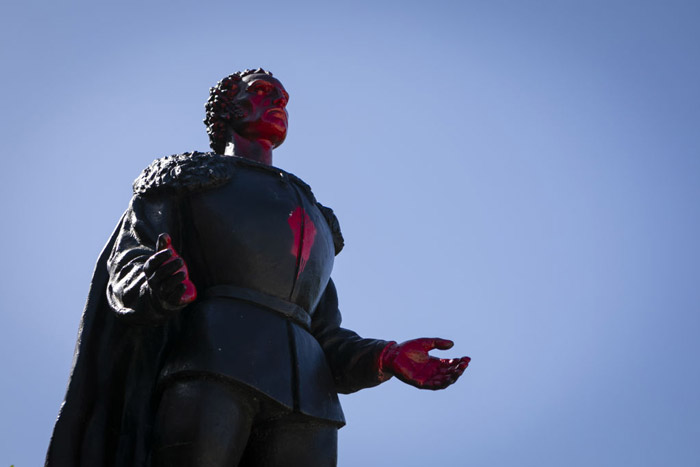 Why Are People Fighting Over Christopher Columbus Statues?

Racist monuments and Confederate statues are being pulled down across the nation thanks to the resurgence of the Black Lives Matter movement. Americans are calling for a reconsideration of our history, who we choose to honor, and what we choose to ignore.

In this debate, Christopher Columbus has become a recurring topic. Statues of Columbus have been vandalized, decapitated, taken down, and/or destroyed in Boston, Massachusettes, Richmond, Virginia, St. Paul, Minnesota, Miami, Florida, and Camden, New Jersey. Petitions for more dismantling of Columbus monuments have emerged, including one aimed at rechristening Columbus Circle in New York City, and toppling its 76-foot column, which has the embattled explorer on top.

Because the American education system is rampant with whitewashing that regularly downplays the horrors of colonization and slavery, there are many who are outright perplexed by why Columbus statues are being targeted. Among those, is Texas senator Ted Cruz. He called the Minnesota protesters, who took down such a statue, “American Taliban.”

This was organized and led by Indigenous people.

Columbus literally started a genocide against them.

What a sick thing to say about those taking down monuments to their own oppression. https://t.co/awLxvyXGDZ

Cruz then tried to check her.

No, he didn’t commit genocide, “literally” or otherwise. He did discover the New World, which led to colonizers, some of whom inadvertently brought disease.

Is it your position that it’s inherently immoral to come to America from a foreign land?

CNN offers a rundown on some of the ways many Americans are wrong about Christoper Columbus. For starters: Despite the ditties we were taught in grade school, Columbus did not “discover” America in 1492. For one thing, the Vikings hit our shores 500 or so years before his Niña, Pinta, and Santa Maria showed up. More importantly: Indigenous people already lived in the Americas. So, the argument that Columbus discovered a nation where people of color were already living is couched in the white supremacy concept that land does not exist until white people have claimed it. Plus, Columbus never landed in what is now the continental United States. He hit Cuba, Haiti, the Dominican Republic, and spots in Central and South America, all the time thinking he’d hit India.

Beyond that, Columbus did bring disease, specifically to the Taino population of Hispaniola. He and his crews carried smallpox, measles and influenza to the “New World,” diseases that the indigenous people had no immunity to, and as such, a lot of them died. Many more would fall as other colonizers followed Columbus.

Some historians believe that the impact of European and African settlers in the New World possibly killed as much as 90% of the native populations and was deadlier than the Black Death was in medieval Europe.

Thus, Columbus was a genocidal killer in that his arrival caused an onslaught of outbreaks that slaughtered indigenous people. But that’s not all.

History.com reports Columbus abducted, enslaved, and sold these captured indigenous people overseas. Those who rebelled he had killed. In one particularly gruesome instance, he aimed to thwart further revolt by having the dismemebered corpses of the rebels paraded through the streets. His invasion on the Carribean island of Hispaniola was so devestating to its native population that “Within 60 years after Columbus landed, only a few hundred of what may have been 250,000 Taino were left on their island.”

TLDR: Columbus did not discover America, and he was a ruthless slave-trader, colonizer, and genocidal tyrant. So, why is he still so honored? It’s in part because he’s become a major symbol of pride to the Italian-American community.

Columbus is a curious choice for an Italian-American icon considering his bloody past. However, the myth of Columbus as a great explorer was embraced—and promoted—by an Italian immigrant population that was eager to settle into their new world, where prejudices against them were profound.

In the late 19th century, Italian immigrants were attacked in the streets and vilfied in the press. Following the lynching of 11 Italian men in New Orleans in 1891—one of the largest mass lynchings in reported American history—The New York Times ran an op-ed that celebrated the murderous mob.

It read in part:

“These sneaking and cowardly Sicilians, the descendants of bandits and assassins, who have transported to this country the lawless passions, the cut-throat practices, and the oath-bound societies of their native country, are to us a pest without mitigation. Our own rattlesnakes are as good citizens as they…Lynch law was the only course open to the people of New Orleans.”

Yes. The New York Times ran a pro-lynching piece. But how did this heinous era of racist horror against Italians in America lead to Columbus becoming a national hero? The Adam Ruins Everything clip below gives a Magic School Bus-inspired history lesson, which includes the identity of Columbus’s spin doctor.

American author Washington Irving, best-known for writing “The Legend of Sleepy Hollow,” penned the first English-language biography of the explorer who’d become a bloody footnote to history. Published in 1828, A History of the Life and Voyages of Christopher Columbus created the mythos of Columbus as a brave and heroic genuis who changed the world for the better.

Defending Columbus tributes in 2017, NY State senator Diane Savino explained that in this context, Columbus was viewed as proof that Italians belong in the US. The 15th century explorer was embraced as the bridge between Europe and America, which led to the Land of the Free and Home of the Brave. So, this marginalized population upheld him as a source of emerging Italian-American pride. They rallied around him with monuments and a national holiday to put their stamp on American culture and history. For this community, these tributes served a purpose. What purpose do they serve now?

Today, Italian-Americans are not under such an intense onslaught of racist attacks, violent and verbal. However, the ancestors of the decimated indigenous population are still—centuries later—fighting to reclaim their voice in their nations and their history amid whitewashing mythology that glorifies colonization and excuses slavery. So, how do we as a nation reconcile the hero worship of Columbus with the truth that he greatly contributed to decimation of the native population already living in the land he didn’t discover in the first place?

That is what this fight is about.

← 'Late Night With Seth Meyers' Airs Its One-Thousandth Show | Review: Trying To Explain the Awfulness of 'Artemis Fowl' To My 12-Year-Old Self →