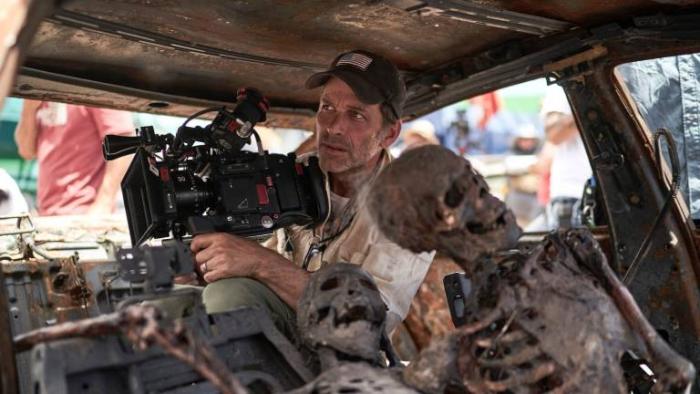 This year has been a busy and successful one for director Zack Snyder. In March, Zack Snyder’s Justice League, his long-awaited and highly anticipated follow-up to Man Of Steel and Batman v. Superman: Dawn Of Justice, was restored to its original version and streamed on HBO Max. And in May, his action/horror film Army Of The Dead streamed on Netflix. It still remains a mystery as to whether Snyder will work with Warner Bros. again to direct more films in the DCEU, particularly the two Justice League sequels that would complete the five-part story he had planned out.

But considering that Snyder recently filmed this skit for Late Show with Stephen Colbert that was anything but complimentary towards the studio, as well as interviews where Snyder admitted that Warner Bros. made no efforts to contact him or his wife, producer Deborah Snyder, ever since Zack Snyder’s Justice League was released (and released on its intended premiere date, as opposed to how HBO Max accidentally leaked the film for viewers who thought they were pressing PLAY to watch Tom & Jerry: The Movie), it seems increasingly unlikely that Snyder will continue to make any more films for Warner Bros., that is unless the recent merger with Discovery Inc. results in massive changes as to who is calling the shots.

Snyder’s relationship with Netflix, on the other hand, continues to be a friendly and beneficial one at the moment, as he has several upcoming projects lined up for the streaming service. Starting with Army Of Thieves, the prequel to Army Of the Dead starring Matthias Schweighöfer and Nathalie Emmanuel, scheduled for release later this year. Then there’s the anime series Army Of The Dead: Lost Vegas, which is also a prequel to Army Of The Dead, and has a voice cast that includes Vanessa Hudgens, Jena Malone, Joe Manganiello, Christian Slater, Yetide Badaki, Harry Lennix, Ross Butler, Anya Chalotra, Christina Wren, Monica Barbaro, and Nolan North. It will also feature several cast members from Army Of The Dead reprising their roles, including Dave Bautista, Omari Hardwick, Ella Purnell, Ana de la Reguera, and Tig Notaro, and will be overseen by Jay Oliva, a storyboard artist and animation film producer/director who has collaborated with Snyder on many of his films. Snyder also has lined up Twilight Of The Gods, which will be another animated series, but focused on Norse mythology instead of ravenous zombies, and will also have Oliva as its showrunner, with a voice cast that includes Corey Stoll, Jamie Clayton, Jamie Chung, Peter Stormare, and Rahul Kohli.

The story is set in motion when a peaceful colony on the edge of the galaxy is threatened by the armies of a tyrannical regent named Balisarius. Desperate people dispatch a young woman with a mysterious past to seek out warriors from neighboring planets to help them make a stand.

“This is me growing up as an Akira Kurosawa fan, a Star Wars fan,” Snyder tells The Hollywood Reporter. “It’s my love of sci-fi and a giant adventure. My hope is that this also becomes a massive IP and a universe that can be built out.”

Rebel finds the germs of its origins in a Star Wars pitch the filmmaker had developed a decade ago. It was a more mature take on the universe created by George Lucas and didn’t move beyond any meaningful conversations after the Walt Disney Company acquired LucasFilm in 2012. At one point, he and Newman, who was behind Narcos and Narcos Mexico, even went down the path of making it a series.

But it was as a feature that he felt its true potential lay. He began reworking the idea with Johnstad and really dove in at the same time as he began making Army of the Dead, bringing in that movie’s co-scribe, Hatten. The latter, at 27, had quietly become an in-demand franchise writer, deepening the world of John Wick for Lionsgate by working on the third and upcoming fourth and fifth installments.

“I’ve spent the last two or three years building out this universe. Every corner has to be painted in. I’ve been doing designs, constantly drawing and really cultivating its fertile ground to make this world fully realized.”

It didn’t take long for fans of Zack Snyder’s work to immediately start doing cartwheels and setting off reggae air-horns to celebrate the news. Which was soon followed by casting ideas on which actress should play the lead in Rebel Moon. These ideas also included the hope that the female lead will be played by a woman of color, especially after writer/critic Jonita L. Davis saw Army Of The Dead and pointed out that even though Snyder has diverse and unique casting for his films, it would be even better for him to cast more Black women in leading roles that have them front and center.

As to the aforementioned casting suggestions: Anna Diop, Jodie Turner-Smith, Diane Guerrero, Samantha Win, Kiki Layne, Brie Larson, Jamie Chung, and Anne Hathaway are some of the names that were tossed out by fans as to who should play the lead.

Many of Snyder’s fans had speculated that his next film after Army Of The Dead and Zack Snyder’s Justice League would be Horse Latitudes (formerly titled The Last Photograph), a smaller and more intimate project that he has previously discussed in several interviews. Although there was some recent talk that Billy Crudup and Corey Stoll were in consideration to appear in Horse Latitudes, there have been no additional details from Snyder as to when that film will begin production. On the plus side, it is more likely that Snyder will direct Horse Latitudes much sooner than his adaptation of Ayn Rand’s novel The Fountainhead, which due to the current political climate is one film that he is in no rush to direct at the moment. (It also helps that Snyder has talked plenty of sh-t in interviews about Rand herself and about her writing, so there is some small comfort to be found in knowing that the novel won’t be adapted by someone who worships at her altar)

None of this has changed any of the excitement that Zack Snyder’s fans are currently feeling about Rebel Moon, and about seeing new and original work from Snyder for them to see and enjoy. Granted, that same excitement has also given fans even more reasons to shake their head at Warner Bros. for letting Snyder slip through their fingers because of their refusal to support his work, and acknowledge that Zack Snyder’s Justice League was a worldwide success that had viewers wanting to see more of his adventures in the DCEU. Only time, and a multi-billion-dollar merger, will tell as to whether anything changes, and if Snyder will be in the director’s chair for both Warner Bros. and Netflix in the days to come.

Rebel Moon is expected to begin production sometime in 2022.

← 'Loki', 'Fear Street', 'Top Chef', And More On Podjiba! | The Former President Is Filing a Class-Action Lawsuit Against Jack Dorsey and Mark Zuckerberg →