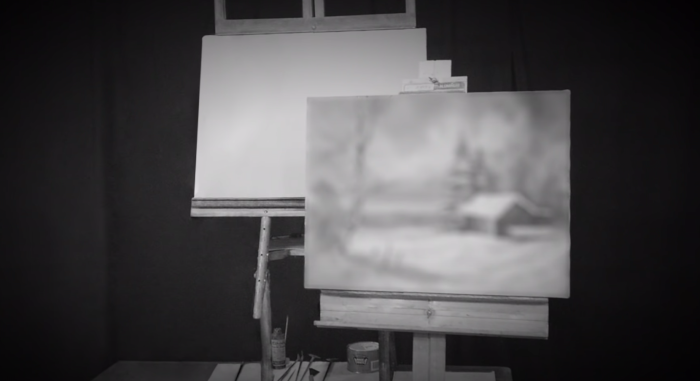 You Can't Watch the Trailer for 'Bob Ross Happy Accidents Betrayal & Greed' Because, Mysteriously, There Is No Trailer

Wait a second! Wait a second! Before we even get to the trailer that explains why you have to watch the movie to understand why there is no trailer, can we back up to the title of this documentary? Bob Ross Happy Accidents Betrayal & Greed? What? Bob Ross? “Betrayal and greed”?

I had no idea there was anything that might qualify under those two words in Bob Ross’s life. His Wikipedia entry sheds very little light, except for a couple of passages, namely:

Ross was very secretive about his life and had a great liking for privacy. Some of only a few interviews with his close-knit circle of friends and family can be found in the 2011 PBS documentary Bob Ross: The Happy Painter. Other conversations were destroyed as part of a legal settlement between Ross’s family and Bob Ross Inc. Bob Ross Inc. is protective of his intellectual property and his privacy to this day.

I think, however, that most of the “betrayal and greed” here concerns the legacy of Bob Ross, and specifically, how Bob Ross’s original business partners, Annette and Walt Kowalski, basically inherited the rights to his work and likeness over the objections of Bob Ross, who wrote them out of his will and meant to leave behind his estate and rights to his name and likeness to his son Steve and half-brother Jimmie Cox. Also, he may or may not have cheated on his first wife.

All of this might be interesting enough to fuel a documentary movie for those interested in Bob Ross — and The Daily Beast article about this situation used “sex and deceit” instead of “betrayal and greed,” although if it were really all that interesting, I’d imagine they’d make a real trailer for it. Right? Then again, the reason they probably couldn’t is because the rights to Ross’s name and likeness are tied up by the Kowalskis (maybe that’s why there are also no images of Ross on Getty?)

The film is directed by Joshua Rofé and produced by Melissa McCarthy and Ben Falcone. It arrives on Netflix on August 25th.