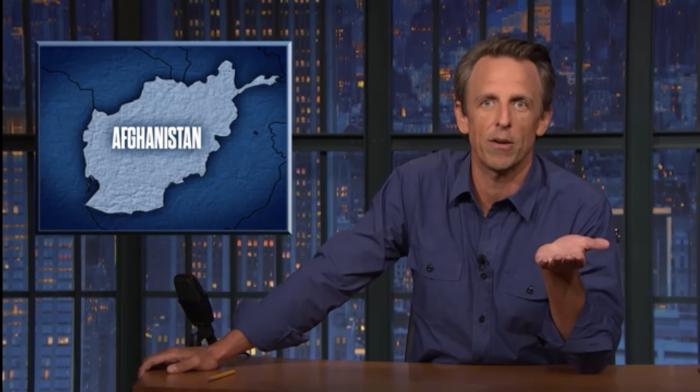 All U.S. troops have been pulled from Afghanistan. The aftermath of their removal has been fraught at best and tragic at worst. Unless you’ve kept your head in the sand, you’ve heard or read about what’s going on. It is not easy news to digest. I’m also, obviously, not saying that hearing the news is worse than actively being a part of it. It is a messy, troubling situation that is best heard through the calm, soothing daddy voice of the late-night host, Seth Meyers.

Meyers’s show often features a segment called A Closer Look where he dives deep into one or more important news topics. The bits are full of running jokes, hard-hitting takes, and the most impressive Vince Vaughn impression you’ve ever seen. Like, freaky good. Do I like his robe and Yankee hat-clad “New York Neighbor” better? Yes.

Sometimes, the A Closer Look segment will take on a more serious tone. This is usually dependent on the news being covered. Pointing out the repetitive foibles of Rudy Giuliani? Go nuts. Covering Afghanistan’s quick takeover by the Taliban and the politicians responsible? That requires a sterner, stronger hand. Don’t get it twisted. The segment is still jam-packed with jokes. It’s just led by Seth giving a very clear and concise rundown of what is going on.

I’m not a proponent of only getting your news from a comedy show. Most hosts of comedy shows, I think, would agree with me. But I get why some people may do just that. Doom and gloom sell papers and garners clicks. Sometimes I just need to know what’s going on without feeling lost and scared. What better way to curb those feelings than a soothing, confident man who can sound like a cigarette-smoking cockroach at will?

← You Can't Watch the Trailer for 'Bob Ross Happy Accidents Betrayal & Greed' Because, Mysteriously, There Is No Trailer | 'The Crown' Unveils Its First Look at Elizabeth Debicki and Dominic West as the Next Diana and Charles →