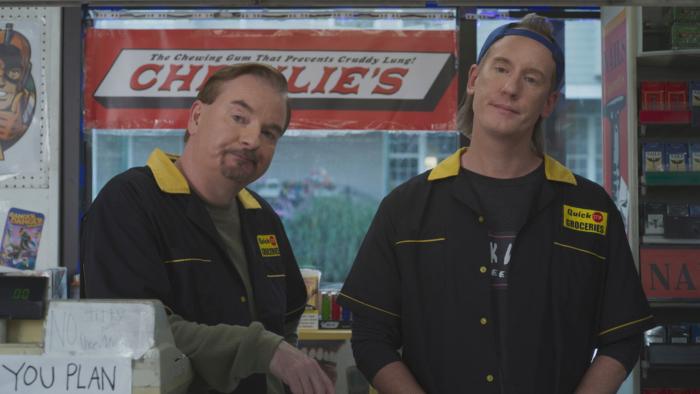 With 'Clerks III,' Kevin Smith Somehow Pulls It Off Again

I have never been to a reunion — high school, college, law school, or otherwise — but here’s how I imagine it might go down: I will spend the day dreading my decision to go. When I finally force myself to walk into whatever event space it’s being held in, I’ll look around and think to myself, “My God. Everyone has gotten so old!” My next thought might be, “I can’t believe these ridiculous people were my friends.”

But after I get over my initial hesitation, down a couple of drinks, and relax a little, I suspect that I will be able to pick up where I left off 5, 10, or 20 years ago with many of those friends. I will remember what I liked about them so much in the first place. “I used to be one of these ridiculous people myself,” I’ll think. I suspect that I’ll ultimately have a great time and go to bed that night buoyed by alcohol and good feelings while basking in the glow of nostalgia.

That’s basically the experience of watching Kevin Smith’s Clerks III. I’ll admit that, though I enjoyed Jay and Silent Bob Strike Back, I wasn’t sure that Smith had another crowd pleaser left in him. This is why reunions last one night and only recur every five to ten years.

But lo and behold, once I got over how much everyone has aged (except for Rosario Dawson), and once I got over how ridiculous the premise is, I fell right back into 1994, that Jersey Quick-Stop, and Kevin Smith’s gift for hitting the exact right nostalgia beats and plucking the exact right heartstrings despite a budget of $12 and a roll of duct tape.

Here’s the lowdown: Randal (Jeff Anderson) and Dante (Brian O’Halloran) are back. They still work at the Quick-Stop, which they co-own. Life hasn’t changed that much, particularly for Randal, while Dante has at least had a few opportunities for a life that were thwarted by tragedy (Dawson’s Becky appears here only as the ghost of Dante’s ex). It’s just another day of tedium and aggravation when Randal gets into an argument with Elias (Trevor Fehrman) and has a heart attack — a widowmaker, just like the real-life Kevin Smith.

After a doctor played by Amy Sedaris saves Randal’s life, he decides it’s time to do something with his life, namely make a movie. More specifically, Randal decides to make Clerks, which he calls Inconvenience. He decides to turn his life working in a convenience store into a movie and cast all his friends as themselves, including Jay (Jason Mewes) and Silent Bob (Smith), but in the end, the movie is less about Randal and more about his and Dante’s friendship.

In other words, Kevin Smith had a heart attack and decided to make Clerks III, which is about his character having a heart attack and making Clerks. You could call it “meta,” but I feel like that word deserves something more sophisticated than what’s on the screen.

And yet, it works. Oh, it’s plenty dumb and overly sentimental. Kevin Smith is still Kevin Smith. He hasn’t evolved; he’s aged. But the thing about these characters, it turns out, is that — while I’m not sure I’d want to hang out with them every day — I’m happy to get together with them more often than every 5 of 10 years, though certainly no more than once a year. I have my limits. Do I cringe when Jay says “Snootchie Bootchies”? Yes, I do. But does my heart clap a little, too? Yes, yes it does.

Is Kevin Smith an incredibly talented director? He is not. Does Clerks III have a cast of impressive actors? It does not (save for a few cameos, including — yes — Affleck), although I’ll grant that O’Halloran outkicks his coverage here. Is Kevin Smith a brilliant screenwriter? I don’t know, but he does have an incredible knack for making his viewers feel at home, feel like they’re part of his world, and that these people are our friends. In Clerk III, he pulls off that trick again, and goddamnit, I went to bed last night full of good feelings, basking in the glow of nostalgia.

(Caveat: If you didn’t watch Clerks in 1994 or at least see Clerks II when it came out in 2006, this movie will not appeal to you. Clerks III is less a movie, and more of a chill hang with people you grew up with, and if you did not grow up with these people, there is nothing here for you.)

Clerks III is available digitally. Smith is also touring the country with it.

← Prime Video's 'Argentina, 1985' Tackles the Trial of the Juntas | James Cameron Has Cranky Thoughts About Marvel →