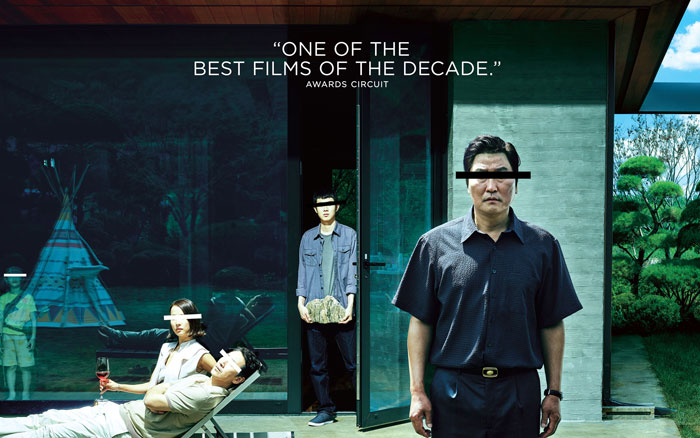 Yesterday there was much excitement on Film Twitter, and not the kind sparked by a furious (and arguably fruitless) debate about Scorsese or Tarantino. Instead, it was waves of excitement over the trailer for Parasite. The #Bonghive assembled in giddiness over the first public peek at the Bong Joon-ho movie that won the coveted Palme d’Or prize at the Cannes Film Festival. And while I share their excitement, I didn’t watch the trailer. At first, I blamed being in a place with wonky wifi. But this morning, I had no excuse, and even as I write this post on the trailer, I’m not watching it. Because I don’t need to and you can’t make me.

Here’s what I know without watching the trailer: It’s directed by Bong Joon-ho, the mind behind such riveting and wild cinema as The Host, Snowpiercer, and Okja. Sold. I don’t know what the plot of this movie is. But I know it’ll play very soon at the Toronto International Film Festival and the New York Film Festival, and I’ll be at both, giddy to see what Joon-ho does next.

Admittedly, watching trailers is part of my job, even if I weren’t the one writing a trailer post about them. Trailers set up expectations for their audience. They give us a hint of plot. They give us the promise of something more. And they provide a sense of context. And I do think context is a valuable and often essential element of film coverage and criticism. But Parasite’s theatrical release is coming after two big film festivals, both of which I will be covering for this site. And film festival rules are a bit different. There, critics might get a logline and see an officially released still. But outside of cast and crew info, we often have little context or clue about what we’re about to see. It’s part of the delicious excitement of the festival experience, walking in unencumbered by months of promotion, expectations, and pre-release speculation. This freedom might be a given for many moviegoers, but it’s a delicious luxury for film critics. And I’m wallowing in that luxury on this one.

I can’t wait to see it. But all of it. I want to experience Parasite like I experienced some of my favorite festival finds of the last year, like Freaks, Dead Dicks, or Knives and Skin. But also, I want to share with you this trailer, because the theatrical release for Parasite is coming fast after the aforementioned fests above. So shortly after you see our review posted, you’ll get to see it for yourself.

So what are you waiting for?

Parasite will open in theaters October 11, following its bows at TIFF and NYFF. Look for team Pajiba’s coverage of TIFF and NYFF in the coming weeks.