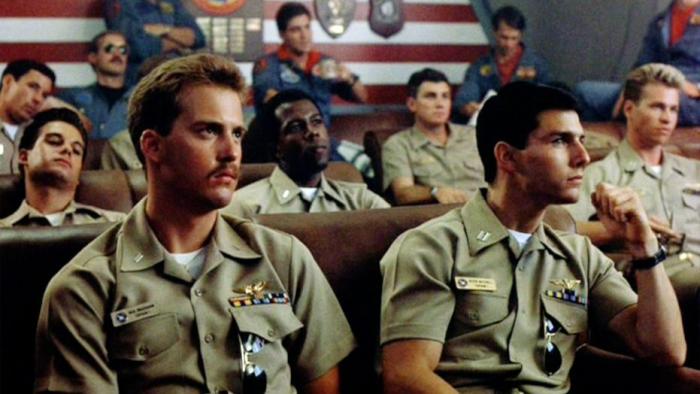 Why Do We All Pretend 'Top Gun' Isn't a Terrible Movie?

As someone who writes about entertainment for a living, it’s part of my job to watch a lot of movies. As someone who only has 24 hours in a day, there are a lot of movies—both new releases and older films—that I haven’t had time to get around to. In my quest to play catchup, I’ve slowly dragged my way to a lot of decades-old films that loom large in the cultural consciousness and found that, yeah, there’s a reason people like them so much. Close Encounters of the Third Kind: Great. Die Hard: Wonderful. Footloose: Not one of my faves, but yeah, I get it.

Not even fun trash. Just genuinely awful and dumb and poorly made. And we’re going to talk about this, because when I watched Top Gun for the first time a few months ago, I genuinely thought I was going insane. This is a movie that’s regarded by many to be a modern classic? This?

If you’ve gotten this far in your life without seeing Top Gun, A) congratulations, and B) you might not know that this is a movie where absolutely nothing happens. In the first scene, Tom Cruise and his fellow fighter pilots encounter a super-secret enemy plane known as the MiG—a MiGGuffin, if you will—and proceed to engage in a riveting and edge-of-your-seat few minutes of absolutely nothing at all. Seriously. Cruise flips the MiG off, the MiG flies away, another pilot has a panic attack and they all go back to the aircraft carrier to slap each other’s butts. It’s anticlimactic and devoid of all dramatic tension, and thus is a perfect metaphor for the movie itself.

The thing about Top Gun is that there’s no real plot, and no antagonist other than the vaguely-referred-to “other side” in whatever unspecified military conflict the Navy is engaged in. Hotshot pilot Maverick (Cruise) and his co-pilot Goose (Anthony Edwards) go to a prestigious fighter pilot school, where they compete against—in flight exercises and homoerotic volleyball matches—the methodical, by-the-book Iceman (Val Kilmer). Goose dies in a freak accident. Maverick quits. Maverick goes back. There’s one final scene where Maverick comes up against the MiG again, and there could be some decent (if entirely predictable) action there, if you weren’t already worn down by an hour and a half of nothing at fucking all.

I’m sorry, but what in the fuck? Top Gun is nothing but wall-to-wall male bonding, which would be fine, if there were anything resembling interesting characters, which there isn’t. All you need to know about the main players is in their call signs. Maverick is the rebel who plays by his own rules. Goose is the funny best friend. Ice Man is the one with a stick up his ass. Riveting. Magic Mike XXL is plot-lite bro bonding, too, but at least it has jokes. And the Cheetos and water scene. And is an all-too-rare examination of female sexual desire and agency. And is brilliant. Sorry, got off on a tangent there.

There are no real stakes in Top Gun. The movie tries to make you care about Maverick’s crisis of confidence after Goose’s death and his lifelong struggle to deal with the legacy of his disgraced fighter pilot father. (“It’s like you’re flying with a ghost.” Aw man, Anthony Edwards, thanks for clearing things up like that.) But it’s tough to care, because Maverick’s such a self-involved brat he shows up late to a date and asks to take shower, while said date finishes cooking their dinner. He’s not a complex character. He’s an asshole with daddy issues convinced he can treat people like shit because he’s ~*~just that cool~*~. We’ve seen that character tons of time before, in movies and in life and in the White House.

I can handle bad dialogue and thinly drawn characters in an ’80s action movie—it’s almost required. But Top Gun is an ’80s action movie without any action. It’s all guys bein’ dudes and talking about how their dicks are hard #nohomo and going all high drama dickfighting over who’s the best fighter pilot…. for eight weeks, until the next Top Gun class comes along and the whole thing is moot.

You can say Top Gun was never meant to be an action movie. Instead, it’s a platonic (“platonic”) romance between Maverick and Iceman, who put aside their difference at the end of the film and go have a quickie in the broom closet. OK. Fine. Thelma and Louise is an examination of same-gender bonding, too, but it isn’t boring as fuck.

Bear with me while I end this with the #hottest of #hottakes: Top Gun is the Donald Trump of movies. It’s jingoistic, blustery, and convinced of its own significance despite bone-deep mediocrity. And yet there are people who hold it up as something to be admired, because it appears to the egocentrism of immature dudebros.

Publisher’s Note: This post was originally published in 2016. We are resurfacing it because yesterday was Top Gun day, the sequel will be out next year, and because Rebecca’s piece is as funny as it is wise. — DR

← As Production Resumes on a Smattering of Projects, The CW Delays Next Season into 2021 | 5 Shows After Dark: 'How to Get Away With Murder' Series Finale ABC, 'Station 19' Third Season Finale →