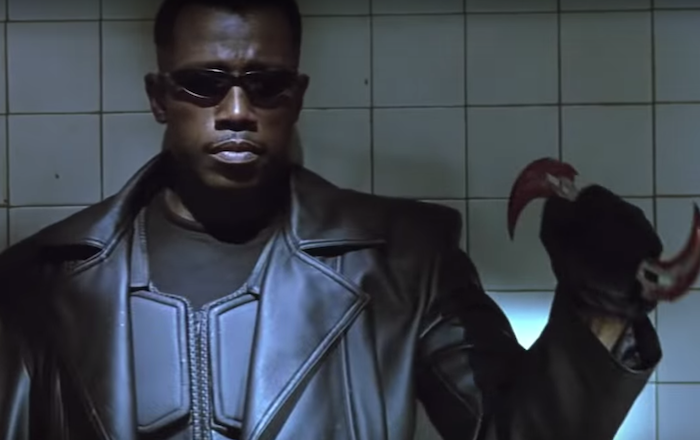 When it Comes to Vampires Only 'Blade' Can Compete With 'Twilight'

I mean, I could point to a number of movies like Passenger 57, To Wong Foo Thanks for Everything Julie Newmar, New Jack City, Demolition Man (in which he is excellent), but honestly, I can skip all those fine movies and jump straight to the Blade trilogy and be done with it all.

Blade (the movie is named after the dude) is a half-vampire, half-human who f*cking hates other vampires because one killed his mother. He’s made it his life’s mission to kick their asses with knives, swords and whatnot (get it? His name is Blade!) and make quips while doing it. In the first film, he fights Stephen Dorff, who is also a vampire, but he’s, like, a hip vampire OK?

In the second movie (directed by an Oscar-winning director named Guillermo del Toro, whom you may have heard of) he fights a lot of super-vampires, and I won’t spoil the plot of it, because there are obviously twists. But guess what? Ron Perlman is there, also. How’s that for a pleasant surprise?

I’m getting ahead of myself, here. Let’s get back to Blade.

You know this movie is going to be awesome when within the first 15 minutes of it, there’s a vampire rave where blood rains down from the sprinkler system, and a seemingly dead vampire reanimates just in time to straight-up murder a s*itty dude who is harassing his ex-girlfriend to go back out with him.

That’s just the first movie, which is genuinely good.

By the time we get to the third movie, which is so-bad-it’s good, we’ve spent, like, 6 hours with the titular hero and Wesley Snipes decided by about hour 3, that was good enough, so he wasn’t going to try anymore.

Leading us to this classic scene:

Yes, Wesley Snipes (who insisted on being called Blade on-set) refused to open his eyes and thus, they were CGI-ed in. You couldn’t top that tomfoolery if you tried. Only Wesley Snipes, in his hey-day, could get away with that and even he barely did. (Notice how we didn’t get a Blade 4….)

(This is why Twilight will always be the best vampire movie series. It tried as hard as it could to fly that close to the sun, knowing full well that vampires die in the sun…well, except for Twilight vampires. They sPaRkLe. I digress.)

The Blade series is glorious in its initial execution, and unintentionally awesome in its dying breath.

Unlike many people, I was fairly upset when I heard that Marvel is rebooting Blade with Mahershala Ali in anti-hero role this time. Ali is excellent in all he does and I have a sneaking suspicion that he’s actually a well-regarded actor who is professional on-set. Which is good for him and all. I think he will be a fine Blade, but I doubt we’re going to be hearing of any shenanigans on-set. I’m willing to bet you that he’ll even open his eyes for all the scenes that require that of him, which is kind of a bummer. Good things are good, but you know what? I love bad things more.

That’s why I love the original Blade trilogy, because you get the best of both worlds. A truly good first entry, a good-in-parts second entry, and a so-bad-it’s-amazing final installment. What more could you possibly want?

← The Best Animals In Halloween Costumes 2019 | Sarah Michelle Gellar Was Done Dirty. 'I Know What You Did Last Summer' Had the Wrong Final Girl →