For a movie set in the past, starring a beloved character we all know is already dead, Black Widow still managed to have an impact on the immediate future of the MCU. If you stuck around through the end credits — and of course you did, it’s a Marvel movie, you know whatsup! — then you were treated to a brief glimpse of the present as Yelena Belova (Florence Pugh) pays a visit to Natasha’s grave. On its face this is a notable setting, if only because fans have long complained that Natasha wasn’t granted a funeral in Avengers: Endgame the way Tony was. With her body presumably left on Vormir, where she sacrificed herself to secure the Soul Stone, it’s likely that the gravesite itself isn’t actually Natasha’s final resting place. It’s a memorial set up in her honor — a theory that’s supported by the epitaph on the gravestone. “Daughter — Sister — Avenger”: As we learned in Black Widow, Natasha’s position as a daughter and a sister is a complicated one she only reconciled during the events of the film, and we have no way of knowing if she ever shared the details of her secret spy family with the other Avengers. Based on that epitaph and the few offerings left at the site, flowers and teddy bears and the like, it seems likely that Yelena, or her “parents,” orchestrated this memorial — and that only Black Widows know about it. This looks like the grave of a woman who saved a handful of stolen girls from being used against their will — not the grave of a superhero who helped save the whole world.

OK, fine, that’s all conjecture on my part, and it certainly isn’t the point of the end credit scene. While Yelena stands by her sister’s grave, her moment of silence is interrupted by a familiar face: Julia Louis-Dreyfus as Contessa Valentina Allegra de Fontaine. Of course, Val shouldn’t be familiar to us just yet — if it weren’t for the pandemic delays, this end credit scene would have been her introduction to the MCU. Instead, we’ve already met her in The Falcon and The Winter Soldier, where she worked to recruit John Walker, the knock-off Captain America. Here it’s clear that she’s already recruited Yelena, and though we still don’t know much about Val or what she has these replacements working toward, we do find out who Yelena’s next “target” is: Clint Barton, the “man responsible for your sister’s death,” as Val puts it. 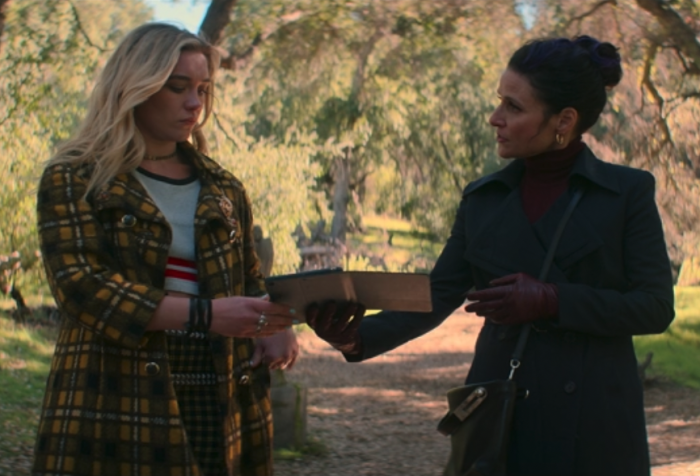 Marvel had previously announced that Florence Pugh would appear in the upcoming Hawkeye Disney+ series, and now we have an idea why: She’ll be hunting Clint! Yelena isn’t a bad person, even if she is a very successful assassin, but we also know she hasn’t got much experience in the world. She, like John Walker, is being set up as a morally complicated figure in the Marvel landscape. They aren’t traditional villains but they aren’t exactly heroes either. They are being manipulated to do what they think is right by Val, and the question is what her agenda is. The comics may hold some hints, as Val was the longtime girlfriend of Nick Fury who worked with S.H.I.E.L.D. but later secretly joined Hydra, and also was a Russian sleeper agent. Her onscreen biography may have changed, but it would be a nice bit of symmetry if she, like Nick Fury, kicked off Phase Four by assembling her own team of Faux-vengers. It’s already clear that the next phase of the MCU involves new heroes, often taking up the mantles of their predecessors. Sam is the new Cap, Wanda had super-powered twins, Clint will be training Kate Bishop. Somewhere Cassie Lang could be learning how to change her size from her dad, and Kamala Khan is dreaming of Captain Marvel. The groundwork has been laid for some Young Avengers or for New Avengers, so why not some Dark Avengers (a villainous pseudo-hero group run by Norman Osborne in the comics) or Thunderbolts (a superhero group comprised of reformed villains, run by Baron Zemo)? It’s also worth remembering that, at the end of Black Widow, Yelena escaped with the freed Widows and was going to make it her mission to free the rest from mind control. They welcomed her with open arms, and it’s entirely possible that Yelena is now the de facto leader of this group of lost, highly-trained assassins — and by extension, Val may be pulling their strings.

Still, the good news is that Yelena isn’t a bad person at heart, and I have every reason to hope that Clint will find a way to get through to her fast in Hawkeye. It’s the least he could do, in Natasha’s memory — and to make up for that godawful Ronin debacle.


← Get Vaccinated, Dummies. | 5 Shows After Dark: 'Catch and Kill' Premiere HBO, 'The Beast Must Die' on AMC →