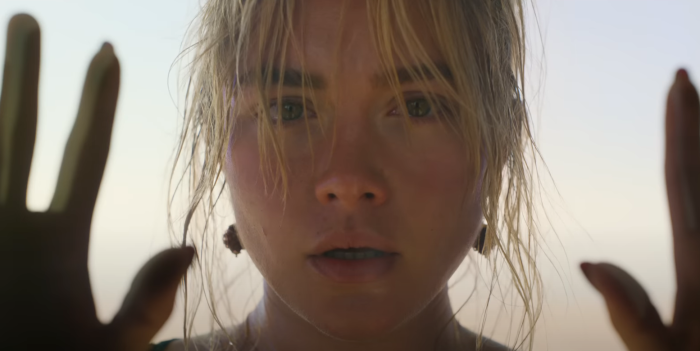 Don’t Worry Darling is a movie that existed on Celebrity Twitter long before it existed on Film Twitter. Recall that the screenplay from Katie Silberman won the 2019 Black List, Olivia Wilde was attached to direct, and there was a bidding war over the rights to the film, which New Line Cinema eventually won. Florence Pugh, Shia LaBeouf, and Chris Pine were cast along with Dakota Johnson.

However, Johnson was replaced by KiKi Layne because of scheduling concerns, while Wilde fired Shia LaBeouf citing her no assholes policy. LaBeouf was replaced with Harry Styles; Harry Styles and Olivia Wilde fell in love; and nearly two years later, Olivia Wilde was served custody papers from her ex, Jason Sudeikis, by a process server during a CinemaCon appearance where she was promoting the film starring her current partner.

The trailer for that film is finally here, and … well, for all the talk of Olivia Wilde and Harry Styles, the trailer mostly belongs to Florence Pugh and Chris Pine. I have watched it a couple of times, and I could not tell you what it’s about. There’s a great cast, maybe a cult/MLM scheme, a lot of sex, and then things get really weird. It is intriguing as hell, and hopefully, it’ll be so good that we’ll all forget about Envelopegate!


← 'Winning Time': Did Spencer Haywood Actually Hire a Hitman to Take Out the Lakers? | Elisabeth Moss Has Now Made it Impossible For Us to Separate Her from Scientology →