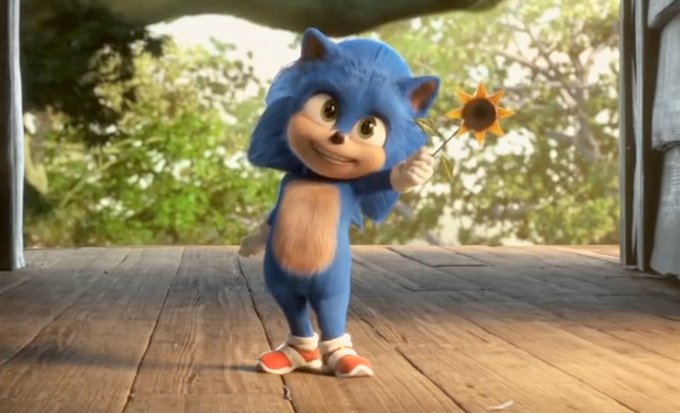 Would Baby Sonic Be Best Friends Or Mortal Enemies With Baby Yoda?

The film-makers of Sonic the Hedgehog have gone to a lot of trouble to ensure their upcoming movie — to be released on Valentine’s Day, for all you lovers — will be a success. They went so far as to entirely redo the lead character after initial responses were… Well, I think we all remember collectively screaming ‘Kill it with fire’ into the abyss when that trailer dropped. Those teeth. The tiny human teeth in his big blue mouth… I’ll never forget…

Now Sonic looks like… Well, he actually looks like Sonic. So fans are happy, but Paramount still has a lot of work to do converting those skeptics. What do you do when you need to win over the masses? You show us a cute baby Sonic, of course!

Aww, what a cutie. Granted, he just looks like a teeny version of actual Sonic but you don’t hear me complaining. It’s the end of the year, I’ll be kind for a change.

Of course, this new baby in town got us all thinking about the other boss baby of 2019, including the voice of Sonic himself, Ben Schwartz.

I see your Baby Yoda and raise you a BABY SONIC! https://t.co/SrjDRvLTdi


Which adorable baby of genre fiction in 2019 has your heart? Would teeny Sonic and Yoda be friends in their meme-friendly glory or would they battle to the violent death for supremacy? The internet, of course, has opinions.

*Baby Sonic is trending and exists*


For me, I just want to know what the original baby Sonic looked like when it had that first terrifying design. Did it also have a mouth full of tiny human teeth? Were its eyes limpid pools of murderous intent? What about its furry man-hands? So many questions. Release the original Baby Sonic, you cowards!