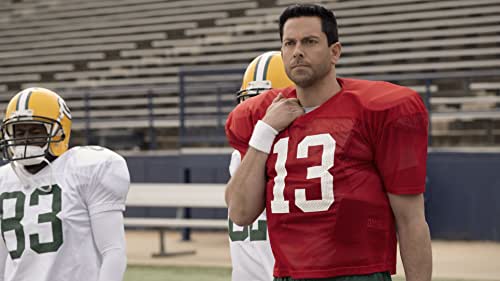 Baseball and football are team sports, so there are not a lot of movies based on real-life individuals from the MLB or the NFL unless those stories are about historically important players like Jackie Robinson, or players who died too young (My All American), or the other subset of these movies based on … scrappy underdogs. There’s Rudy and there’s Invincible, that Mark Wahlberg movie about Vincent Papale who managed to overcome all the odds and land in the NFL at the age of 30 becoming the oldest rookie ever.

Needless to say, these individual scrappy underdog stories are usually about white dudes who overcome things like … being short. Or being older. Or in the case of Kurt Warner, overcoming the love of his wife and children and a minimum wage job working in a supermarket while also working as an assistant coach at a university. What an underdog!

There aren’t movies about much better players with much better stories and certainly much bigger obstacles to overcome, but then again, those better players with bigger obstacles don’t attribute Christianity to their successes. Those players also do not believe that God “healed” them of a concussion. Kurt Warner does, and that’s why he gets a movie about a very good quarterback — at times — who manages to make it to the NFL because there is no shortage of chances for white guys, no matter how many times they otherwise strikeout. It also helps to have a good offensive line and a great running back, otherwise, you end up throwing a lot of interceptions. Right, Kurt?

I also find it amusing that Dick Vermeil is the same coach who gave both Vince Papale and Kurt Warner their, what, fifth chances?

Anyway, as for the team concept, it’s telling that there are only three other teammates — Marshall Faulk, Isaac Bruce, and Trent Green (the QB he replaced) — on the cast list, and both Faulk and Bruce are listed low in the credits (and Marshall Faulk is played by an actor named, I kid you not: O.J. Keith Simpson). Apparently, God smiled only upon Kurt Warner, who must have almost single-handedly won two Super Bowls. Interestingly, the tagline for the film is “No one wins alone,” and by that, the movie means that Warner was assisted not by Marshall Faulk or Isaac Bruce, but Jesus. Jesus is how Kurt Warner won two Super Bowls.

American Underdog opens in theaters on Christmas Day, although I’d be aware that a higher percentage of unvaccinated folks may be attending.