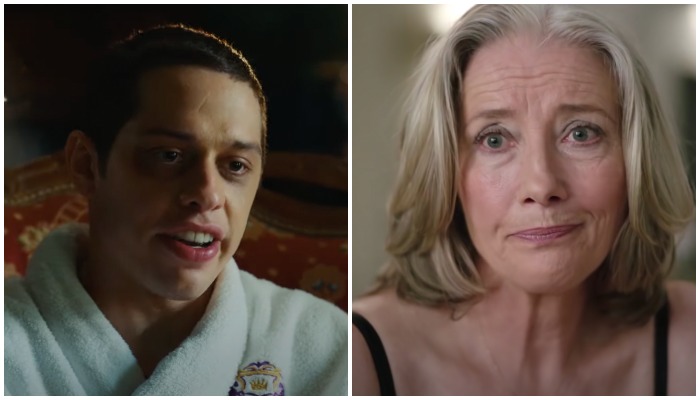 The morning has blessed us with a number of trailers for films (and a TV show) we actually might want to see! Maybe even in a theater! Let’s start with Bodies, Bodies, Bodies, a spectacular-looking slasher pic from Halina Reijn that is advertised as “generation-defining satire.” I buy that — it looks like this generation’s Scream and boasts an impressive cast in Amandla Stenberg, Maria Bakalova, Pete Davidson, Rachel Sennott, Myha’la Herrold, Chase Sui Wonders, and Lee Pace. The trailer also ends with Davidson saying, “I just look like I f**k. You know what I mean? I look like I f**k.” It comes out in August, and it’s an A24 flick, so you know it will be in theaters.

While Pete Davidson f***s in Bodies, Bodies, Bodies, Emma Thompson gets f***ed in Good Luck to You, Leo Grande. I mean that literally. It’s about an older woman, who has only had unfulfilling sex with one man her entire life and decides to hire a sex worker to give her her first orgasm. The premise doesn’t do it justice, because it looks incredibly charming. This one comes to Hulu on June 17th in the United States while it appears that the UK will get to watch it in theaters on that same day.

This trailer is for an Apple TV+ television series called The Essex Serpent, based on the Sarah Perry novel of the same name. It’s about a woman, played by Claire Danes, who seeks to find a mythical creature but who ends up getting f**ked by Tom Hiddleston, instead.

This one is another Hulu flick coming on June 3rd. Written by Joel Kim Booster (who also stars with Bowen Yang and Margaret Cho), Fire Island is gay Pride and Prejudice set on Fire Island. It looks terrifically fun, and I’m guessing everyone gets f***ed in this one.


← Amber Ruffin Wants To Know Why Florida Is Banning Math Books | Tell Us Jack Dorsey: Will Elon Musk 'Extend Twitter's Light of Consciousness' Before Or After He Loses His Boner? →

Image sources (in order of posting): A24, Lionsgate