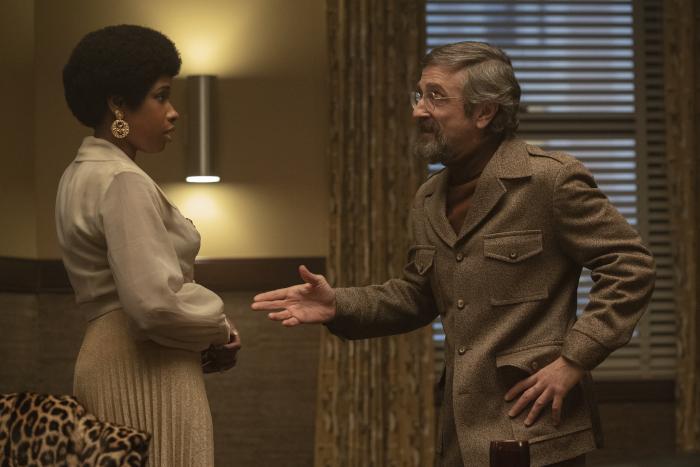 Ebola Rex: Coming to On Demand and DVD June 11

Synopsis: “Starring screen veteran Mel Novak (Game of Death, An Eye for an Eye), and directed by Dustin Ferguson, Ebola Rex sees an infected T-Rex escaping from a Science Lab in downtown Los Angeles, destroying everything in its path!”

Our Take: You had us at the terrible, terrible, deeply tacky title.

Akilla’s Escape: Coming to theaters and digital on June 11

Synopsis: “Akilla is forty years old and for the first time in his life, the clandestine cannabis grow operation he runs is legit. Only one year into government-approved legislation, the pendulum of hypocrisy takes a toll and Akilla decides to cash out. While making a routine delivery on a cool, summer night, destiny takes an unexpected turn when Akilla confronts a firestorm of masked youths in an armed robbery.

In the aftermath of the heist, Akilla captures one of the thieves, a mute fifteen-year-old boy named Sheppard. Upon learning the bandits are affiliated with the Garrison Army, a Jamaican crime syndicate his grandfather founded, Akilla is forced to reckon with a cycle of violence he thought he escaped.”

Our Take: This TIFF 2020 selection has garnered buzz for its exploration of the effects of generational poverty and the strong central performance of Saul Williams.

Censor: Coming to theaters on June 11, then On Demand June 18

Synopsis: “Film censor Enid takes pride in her meticulous work, guarding unsuspecting audiences from the deleterious effects of watching the gore-filled decapitations and eye gougings she pores over. Her sense of duty to protect is amplified by guilt over her inability to recall details of the long-ago disappearance of her sister, recently declared dead in absentia. When Enid is assigned to review a disturbing film from the archive that echoes her hazy childhood memories, she begins to unravel how this eerie work might be tied to her past.”

Our Take: Jason declared it “creepy and fabulous” out of Sundance. Read his full review here.

Synopsis: “The popular teen dramedy returns as season two finds a newly out of the closet Victor entering his junior year at Creekwood High. But being out brings with it new challenges, as Victor faces a family struggling with his revelation, a heartbroken ex-girlfriend in Mia, and the difficulties of being an openly gay star athlete — all while navigating the excitement of his relationship with Benji.”

Our Take: This is the kind of Pride Month content we crave.

Luca: Coming to Disney+ on June 18

Synopsis: “Disney and Pixar’s original feature film Luca is a coming-of-age story about one young boy experiencing an unforgettable summer filled with gelato, pasta, and endless scooter rides. Luca shares these adventures with his newfound best friend, but all the fun is threatened by a deeply-held secret: they are sea monsters from another world just below the water’s surface.”

Our Take: Love a kid-friendly monster tale. However, this featurette’s intense use of “friend” over and over seems a panicked reaction to early speculation that this would be a queer-coded love story between two boys. Disney, you gave us queer-coded princesses with Raya and the Last Dragon? Why the panic here?

Good on Paper: Coming to Netflix on June 23.

Synopsis: “Andrea Singer always put her stand-up career first, and while dating came easy, love wasn’t a priority… that is until she meets Dennis, a quirky nerd with disarming charm who coaxes her into letting her guard down. Her best friend Margot isn’t convinced he’s all he seems and she urges Andrea to embark on a wild goose chase to uncover who Dennis really is. Based on a mostly true story, Good on Paper is written by and stars the hilariously sharp-witted Iliza Shlesinger. Also starring Ryan Hansen, Margaret Cho, and Rebecca Rittenhouse.”

Our Take: Shlesinger was an unexpected bright spot in the horrid Mark Wahlberg vehicle, Spenser Confidential. Plus, Ryan Hansen!

The Ice Road: Coming to Netflix on June 25

Synopsis: “After a remote diamond mine collapses in far northern Canada, a ‘big-rig’ ice road driver (Liam Neeson) must lead an impossible rescue mission over a frozen ocean to save the trapped miners. Contending with thawing waters and a massive storm, they discover the real threat is one they never saw coming.”

Our Take: I mean, to quote Key & Peele, Liam Neesons is our sh!t.

The Mysterious Benedict Society: Coming to Disney+ on June 25

Synopsis: “After winning a scholarship competition, four gifted orphans are recruited by the peculiar Mr. Benedict for a dangerous mission to save the world from a global crisis known as The Emergency. Reynie, Sticky, Kate, and Constance must infiltrate the mysterious L.I.V.E. Institute to discover the truth behind the crisis. When the headmaster, the sophisticated Dr. Curtain appears to be behind this worldwide panic, the kids of The Mysterious Benedict Society must devise a plan to defeat him.”

Our Take: Based on the best-selling book series, this mini-series boasts whimsy, weirdness, and a cast that includes Kristen Schaal and Tony Hale. Plus, it looks like The Umbrella Academy minus the angst.

Let Us In: Coming to digital and On Demand on July 2

Synopsis: “A spirited twelve-year-old girl and her best friend look to uncover the sudden disappearances of several missing teens in their small town. Realizing there might be something deeper happening, Emily and Christopher might be up against forces they can’t even imagine. Based on the urban legend ‘The Black Eyed Kids.’”

Our Take: This looks like off-brand Goosebumps, and we’re not mad at it. Bonus: Saw’s Tobin Bell giving kid-level spookiness.

Respect: Coming to theaters in August

Synopsis: “Following the rise of Aretha Franklin’s career from a child singing in her father’s church’s choir to her international superstardom, Respect is the remarkable true story of the music icon’s journey to find her voice.”

Our Take: Acclaimed Broadway director Liesl Tommy teams with Jennifer Hudson and a star-studded supporting cast to bring Franklin’s story to big, bold, glittering life. Even if this wasn’t so close to the Pajiba family, we’d be stoked.

Synopsis: “Inspired by true events, Everybody’s Talking About Jamie follows Jamie New (Max Harwood), a teenager from Sheffield, who dreams of life on stage. While his classmates plan their livelihoods after they leave school, Jamie contemplates revealing his secret career ambition to become a fierce and proud drag queen. His best friend Pritti (Lauren Patel) and his loving mum (Sarah Lancashire) shower him with endless support, while local drag legend Miss Loco Chanelle (Richard E. Grant) mentors him toward his debut stage performance. But Jamie also has to contend with an unsupportive father (Ralph Ineson), an uninspired careers advisor (Sharon Horgan), and some ignorant school kids who attempt to rain on his sensational parade. In rousing and colourful musical numbers, Jamie and his community inspire one another to overcome prejudice, be more accepting, and to step out of the darkness into the spotlight.”

Our Take: The heralded stage show toured the world and now is coming to home theaters with panache, a big heart, and Richard E. Grant!

The Nowhere Inn: Coming to digital and theaters on September 17

Synopsis: “From real-life friends Annie Clark (a.k.a. GRAMMY award-winning recording and touring artist St. Vincent, XX) and Carrie Brownstein (Portlandia, Sleater-Kinney, the best-selling Hunger Makes Me a Modern Girl) comes the metafictional account of two creative forces banding together to make a documentary about St. Vincent’s music, touring life, and on-stage persona. But they quickly discover unpredictable forces lurking within subject and filmmaker that threaten to derail the friendship, the project, and the duo’s creative lives. The debut feature film from Bill Benz (Portlandia, At Home With Amy Sedaris) comes a densely woven, laugh-out-loud funny and increasingly fractured commentary on reality, identity, and authenticity. A story of two close friends who attempt to wrestle the truth out of a complex subject before the hall of mirrors that is their artistic lives devours them completely.”

Our Take: Before the world shut down, I saw this for a film festival and was blown away by its biting humor and chaotic exploration of persona and personal relationships. Plus it’s got Dakota Johnson in a lip-biting cameo.

Synopsis: “The breathtaking, generation-defining Broadway phenomenon becomes a soaring cinematic event as Tony, Grammy and Emmy Award winner Ben Platt reprises his role as an anxious, isolated high schooler aching for understanding and belonging amid the chaos and cruelty of the social-media age.”

Our Take: Based on a beloved Broadway show, boasting a star-stuffed cast, adapted by the minds behind The Perks of Being a Wallflower and The Greatest Showman, this musical drama’s got a great pedigree. But we’re messy benches, so this becoming the most controversial trailer of the week—because of Platt’s age and the wider world discovering this wild plotline—has us outright giddy with anticipation.

Lastly, this is not a trailer, but it’s too exciting to ignore. Karen Gillan, Lena Headey, Angela Bassett, Michelle Yeoh, Carla Gugino, and Paul Giamatti are teaming up for a Netflix action movie called Gunpowder Milkshake. Debuting July 14, it is about “Three generations of women fight back against those who could take everything from them in the mother of all action movies.” 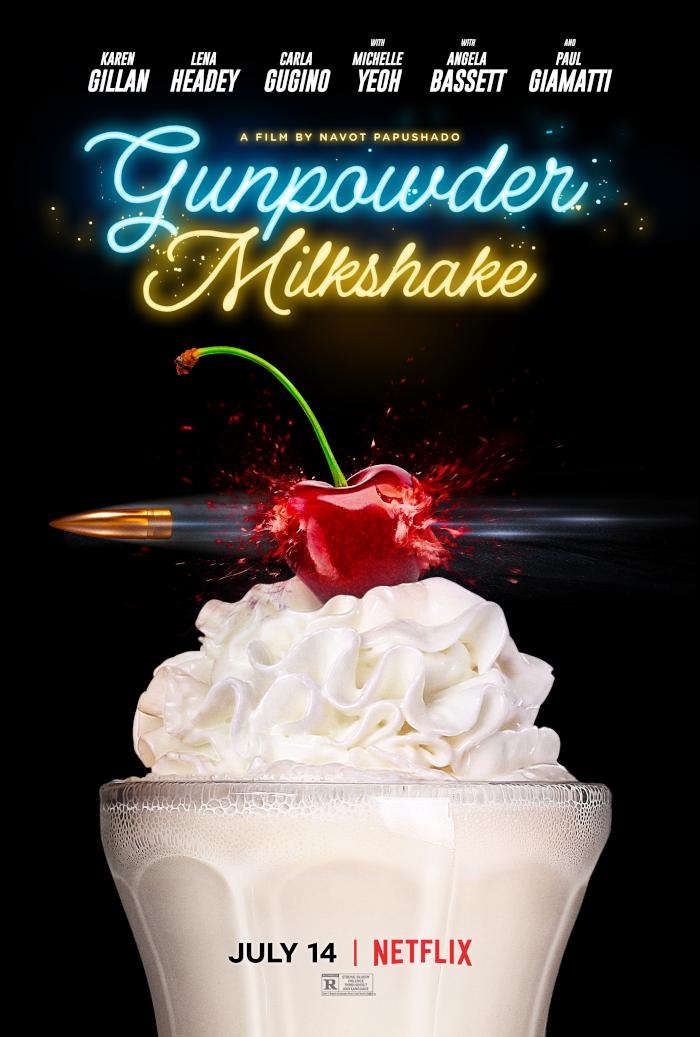