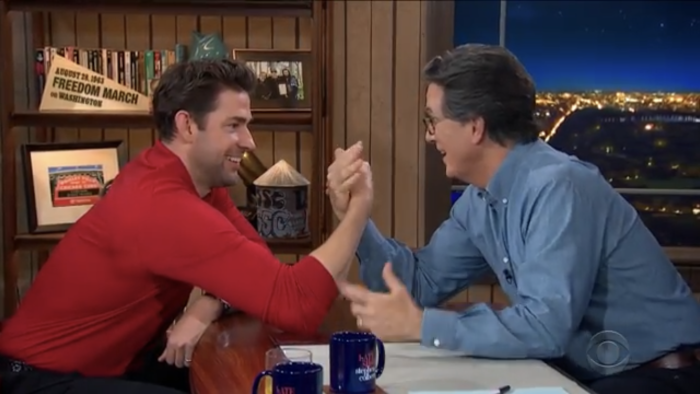 The two men (joined by Colbert’s wife Evelyn) ran the gamut of interview activities. They shared a drink, discussed John’s new movie, hugged, answered the Colbert Questionnaire, and arm-wrestled. So much physical contact! I actually found myself saying “whoa whoa whoa, you can’t do that” out loud when the two touched. It took me a moment or two to get over just how strange it all felt.

Krasinski, who has been in action hero shape thanks to his role as Jack Ryan had a challenging time arm-wrestling the late-night host. It was a joyful moment to witness between the two people. While watching it, I quickly went from someone who would be fine to never shake a hand again to someone who wants desperately to arm wrestle John Krasinski. That’s natural, right?

Late-night shows have had to change significantly over the last year, but it’s great to see them so easily slip into their old shoes. These segments were an absolute delight to watch. Seeing people interact like this in such a cathartic way? Hook it into my friggin veins. Just not on my arm wrestling arm.

← Shout Out to the Super Cool Teen Who Got Her 'Hannibal' Fanart in Congress | Trailer Park: 'Luca,' 'Respect,' 'Dear Evan Hansen,' 'Ebola Rex', and More →