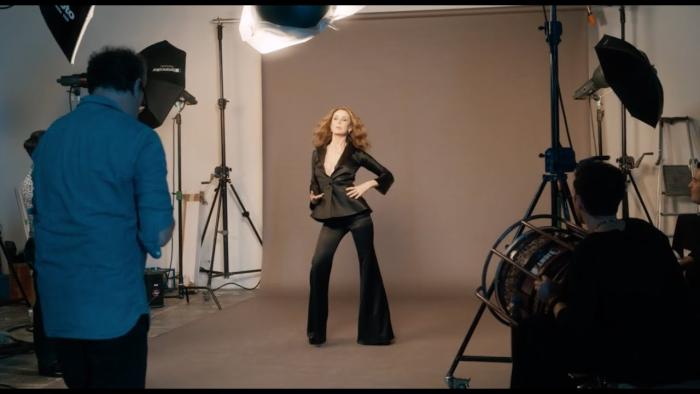 It’s the stuff of musical legend: The girl from Quebec, the youngest of 14 children, who was catapulted to megastardom thanks to her incredible voice. She won the Eurovision Song Contest. She married the man who had managed her since she was 12. She sold over 200 million records worldwide and revolutionized the Las Vegas residency for a new age of singers. And her name… is Aline Dieu.

The newest trailer for Aline, the biopic of Celine Dion that’s technically not about Celine Dion, dropped this week. Is it too early to call it the cultural event of 2022?

When choosing to adapt the life of a certain Celine Dion into a biopic, French writer-director-actress Valérie Lemercier decided that such things were too normal for her. Non, instead, she chose to tell ‘a fiction freely inspired’ by Dion. Sure, OK. Biopics often deviate sharply from the reality of their subjects and it’s much easier to tell a truer story without meddling from the estate. But wait, they’re playing Dion’s music so that means she had to on some level approve the film. Did she pick the name Aline? Huh. Fine, then this is an Across the Universe situation, wherein her music tells a story more inspired by her songs than her own life. Nope, because if you know even the vaguest details about Dion’s life then you’ll notice how achingly faithful this trailer is to her story. It’s all there, except for the names.

So what parts are ‘freely inspired’?! Maybe it’s Lemercier’s decision to cast herself as Aline from all ages. No, seriously, she plays the part from childhood to her 50s, even though she’s older than Dion in real life. They shrank her down like Martin Short in Clifford! In fairness, that is the sort of bonkers move that the delightfully eccentric Celine would probably approve of.

The best part of this trailer, other than the hardcore Dion drag, is the questionable use of a ‘glowing’ quote from Kyle Buchanan of the New York Times. ‘You have not lived until you’ve seen this,’ it declares. ‘I’ll be thinking about it for years to come.’ Sounds glowing, right? Here’s some of the rest of Buchanan’s review:

‘As a cinematic presence, Preteen Aline looks less like our main character and more like she’s ready to terrorize Vera Farmiga in the next ‘Conjuring’ movie. Why didn’t they just cast an actual kid? I’m told that as a French comedian, Lemercier has often played children, but ‘Aline’ takes this shtick several steps too far: The movie is like ‘Bohemian Rhapsody’ if they shrank Rami Malek and made him play his own teeth. Have you seen those Twitter prompts that ask you to reimagine a classic film with one character replaced by a Muppet? Aline reminded me of that, except the main character is the Muppet and instead of felt, she is made from your nightmares.’

Well, I need something to tide me other until the next Ari Aster movie.

As other reviews have noted, Aline is utterly fawning in its adoration of Dion so don’t expect any examination of how unsettling everything regarding husband/manager René Angélil was. This is basically Bohemian Rhapsody with a sliver more self-awareness and a whole lot more madness. If nothing else, it’s fascinating to see this kind of vanity project centered on a totally bonkers filmmaker who clearly has a vision. Honestly, it seems a hell of a lot more interesting than most biopics.

Aline does not yet have a U.S. release date but don’t worry, we’ll definitely be keeping an eye out for further developments.