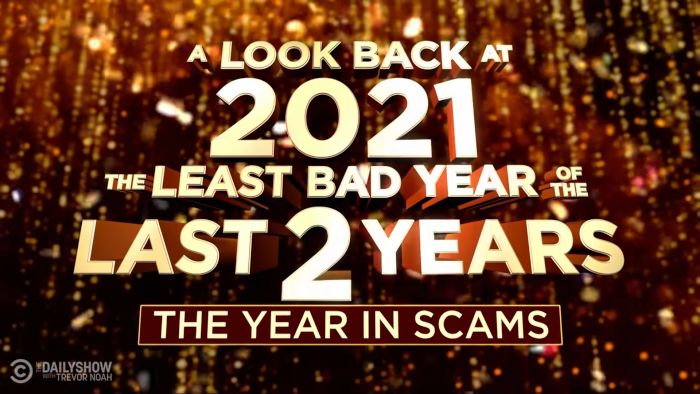 There’s a sucker born every minute! At least that used to be the case. Now, it’s probably more like every ten seconds. As the information age marches on, lack of information spreads like wildfire. Just look at any of the several articles written by our own, wonderful Jen Maravegias. People will believe anything. 2021 has been strong proof of that.

In a Daily Show 2021 retrospective segment, correspondent Michael Kosta laid out several of the year’s biggest scams. They ranged from misused horse dewormer to white people not wanting to deal with their history. The breadth of the scams is staggeringly vast. They affected all kinds of people and dominated the conversation over the last year. Fun times!

It’s especially jarring to look at this as a year-ending list. We have been in the year that never ends for almost two years now. So far, it does not look like 2022 will bring us any relief. I mean, did you see the new Fantastic Beasts trailer? Complete nonsense. I feel like most end-of-the-year lists are a look back. This one felt more like a look forward.

Maybe I’m wrong. Perhaps next year will bring a little relief when it comes to stupid people doing stupid things that hurt people other rather than themselves. However, as I typed that, it became very clear to me that things won’t change. I’m sorry that I dangled hope in front of you like that, only to pull it away at the last second. That’s 2021 for ya!

← Trailer: 'Aline' is a Celine Dion Biopic That's Technically Not About Celine Dion | The Best and Worst Books of Cannonball Read 13 →