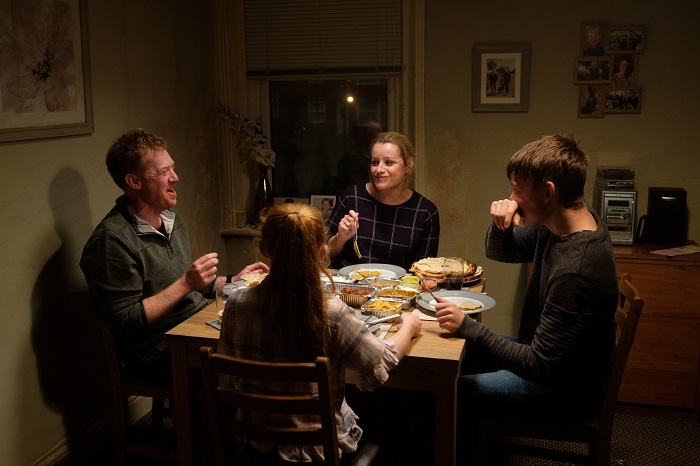 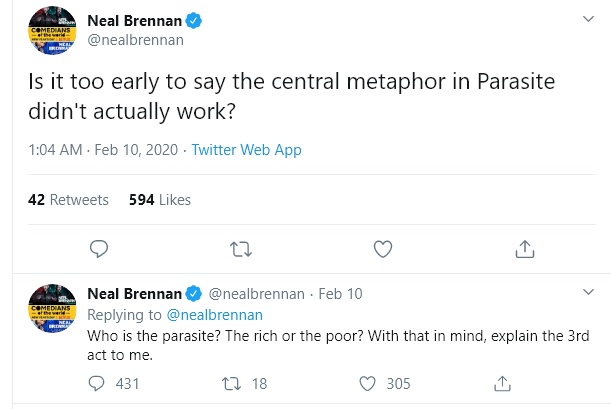 Oh, Neal! You rapscallion! Brennan kept going in on people all over Twitter for the next week or so after this tweet, swearing up and down that Parasite failed because rich people are really good, actually. I suppose you could say it was a bit, but it wasn’t very funny, so who knows! In actuality, though, I just think Brennan is like a fair amount of rich people who saw Parasite and probably thought, “But the Parks were so nice to the Kims, what’s the big deal?” There is a refusal here to acknowledge that Director Bong is making a statement on how the entire system of capitalism is fucked, for anyone and everyone who must operate within it. Not just rich people, not just poor people. Everyone.

And if you still think, “Eh, I’m not sure the Parks deserved what the Kims did to them,” because you don’t understand that the Kims suffered tragedies, too (daughter dead; dad locked away forever; son acquiescing to the capitalist dream of wealth and homeownership instead of maintaining a stance outside of it), then maybe you should see Ken Loach’s Sorry We Missed You. There are no rich people here to whom viewers can assign their misplaced sympathies. Loach and writer Paul Laverty, constant collaborators (whom you may recall worked together on 2016’s I, Daniel Blake and the 2006 Cillian Murphy-starring classic The Wind That Shakes the Barley), instead aim quite squarely at various arms of the capitalist system—the gig economy, the healthcare industry—and demonstrate their myriad failures. Loach has always had quite a bit in common with the Dardenne brothers and their cinematic humanization of the working class, and quite often Sorry We Missed You reminded me of the Dardennes’s Two Days, One Night, about a factory worker played by Marion Cotillard whose colleagues are encouraged by factory management to vote her out of a job so they can each get paid slightly more. The Dardennes cycled through those factory workers in Two Days, One Night, sharing with us how each of them would be manipulated into voting this way, and Loach does something similar with Sorry We Missed You, demonstrating how the underclass is always operating at a disadvantage compared with their superiors. (Also in this conversation: Boots Riley’s Sorry to Bother You.) 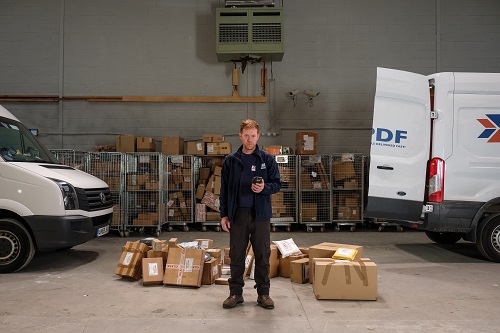 Set in Newcastle, England, Sorry We Missed You focuses on a working-class family led by Ricky (Kris Hitchen), a former laborer who has been looking for steady employment, his wife Abby (Debbie Honeywood), who works as a home attendant for various elderly and disabled clients, and their children, older teenager Seb (Rhys Stone), who has been cutting school to run around town with his graffiti crew, and the younger Liza (Katie Proctor), who is given more responsibility by her parents in Seb’s absence. (Note that coincidentally, like in Parasite, this is a nuclear family of four, with a driver father and domestically employed mother.) After losing their home in the 2008 financial crash, the family’s only asset is Abby’s car, which she uses to drive around to her various client appointments. Otherwise, they’re renting; eating a lot of pasta (one of those details you’ll recognize as a working-class person, because pasta is cheap compared with lots of other things); and dealing with the fact that they barely see each other given how draining Ricky’s and Abby’s schedules are.

What about if an opportunity was handed to them? If Ricky was given the ability to set his own schedule? Be his own boss? Be a franchisee? That is how Ricky takes a chance as a delivery driver, after an interview in which Ricky has to perform his own worthiness (including mentioning “I’ve got my pride” rather than ever going on the dole). At first, the job seems like it could have the potential for high earnings (1,200 pounds a week!); if he stuck with it for two years, Ricky calculates, they could have enough money to buy a house. “You’re gonna be a white van man now?” Seb smirks, alluding to his father’s years of employment struggles, but Ricky is all in. He convinces Abby to sell her car so he has enough money to buy a van, because the rental rates the company offers are so high compared with buying your own, and he goes all-in on the company’s “You don’t work for us, you work with us” branding language.

The reality, of course, is that this industry is terrible. On the corporate side, the people running this hub are so intent on deliverables and metrics that they abuse their workers regularly and nonchalantly. On the consumer side, the people receiving the packages are assholes to the drivers, rude and condescending. From all sides, Ricky is treated as if he is lesser-than: lesser-than his boss, who doesn’t care at all about any family or personal emergencies his drivers might experience, and lesser-than the delivery recipients, who complain the one time that Ricky brings along Liza so that they can spend some together. He’s paying for the van, he’s working himself to the bone, he’s out the door before dawn each day, he’s home late each night, he’s peeing in a plastic bottle, he’s never eating during his shift, and it’s still not enough. The take-home pay is awful. The experience is killing him. And if you haven’t read about how much of this is the norm, in particular because of how Jeff Bezos and Amazon are taking over the world, you should. 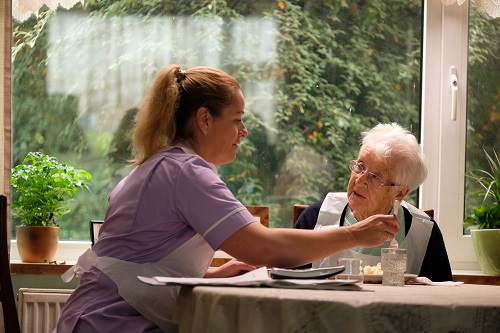 Things aren’t that much better for Abby, either. Without her car, she has to rely on the bus system to get around to her various appointments, which is adding more travel time—time that isn’t paid—to her day. She’s lost her sense of privacy, meaning that any conversations she has with her assigning agency about her clients are overheard by other people waiting for or commuting on the bus. And although her job is obviously full time, she’s paid only by each appointment, meaning that she’s encouraged to stack them one after another—decreasing the amount of time she actually has with each person. Abby is a carer, and it’s clear in her compassion, her patience, her affection for her clients. But just like Ricky, the demands placed upon her are for more. Not for interactions that are meaningful, or for connections and relationships that are personally impactful. Just more clients, more of Abby’s time, more being on call. And because Abby is someone who does care about people, she often agrees. Once you find your passion, make it into your job, goes that aspirational adage of our late-stage capitalist age—but how much is too much?

Unlike Parasite, which specifically uses the Park family’s wealth [and housekeeper Moon-gwang (Lee Jung-eun) and her husband, Geun-sae (Park Myung-hoon), who buy into the Parks’ elevated status by basically moving into their home] and their othering of lower classes to raise questions about questions of worthiness and humanity within a capitalist system, Sorry We Missed You makes clear that practically everyone is complicit because a profits-based, individually focused structure is inherently corrupt. Ricky’s boss isn’t portrayed as being particularly well off, but he’s obsessed with setting himself apart from the drivers, treating them like chattel. He’s bought into the top-down nature of this hierarchy, and he’s going to find whatever way to keep himself on top. When Ricky is jumped, beaten, and drenched in his own urine by thieves who steal various parcels from his delivery van, his boss isn’t concerned about whether Ricky’s OK—instead, he immediately launches into how Ricky is now more than 2,000 pounds in debt because of the swiped items. All of Abby’s interactions with her assigning agency are over the phone; there’s a lack of humanity to her interactions with her boss, which is in strict contrast to how personal her work with her clients is. Through every interaction, Ricky and Abby are reminded that they are employees and not people. It is only their labor that matters to their bosses, not their humanity. If those flaws within our current economic systems don’t enrage you, I’m not sure why you’ve kept reading this far down.

Much like Parasite, Sorry We Missed You also ends in a personal collapse. In the final moments of Parasite, we learn from son Ki-woo (Choi Woo-shik) that he has decided to dedicate himself to earning so much money that he can one day buy the Parks’ former house, in the basement of which Ki-taek (Song Kang-ho) is hiding from persecution for his killing of the Park patriarch (Lee Sun-kyun). This is, well, the American dream, but in the context of Parasite, this is a surrender to the type of thinking that set the Parks apart from the Kims in the first place. This is a fetishization of that house and what it represents, which is exactly what the Kims, for the majority of the film, were working against. This is not a happy ending.

And the same goes for Sorry We Missed You: After the attack upon Ricky, the family collects around him, with Seb in particular trying to connect with his father. But the next morning, still bandaged, barely able to see out of one eye, possibly concussed, Ricky still gets into that white van to go to work. Even with Abby, Seb, and Liza trying to stop him, he revs the engine, essentially shakes them off, and drives away—“I’ve got to go to work, I have not got a choice,” are some of the final tearful words to his family. This is a different tone from Parasite, in which Ki-taek presents his plan to his father with pride, but the message is the same: The loss of self in pursuit of capital is, in our current system, bleak yet inevitable. Whether in South Korea or the United Kingdom, you can’t escape it.

Sorry We Missed You opens in limited release around the U.S. on March 4. Parasite is back in theaters around the U.S. after its Best Picture win at the 92nd Academy Awards. 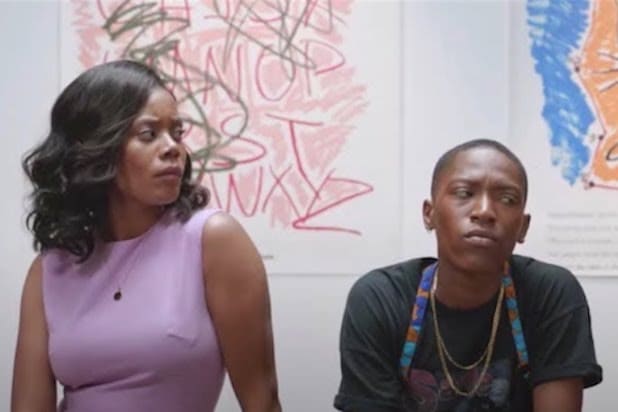 The Appropriate Way to Look at Nik Wallenda's Volcano Walk