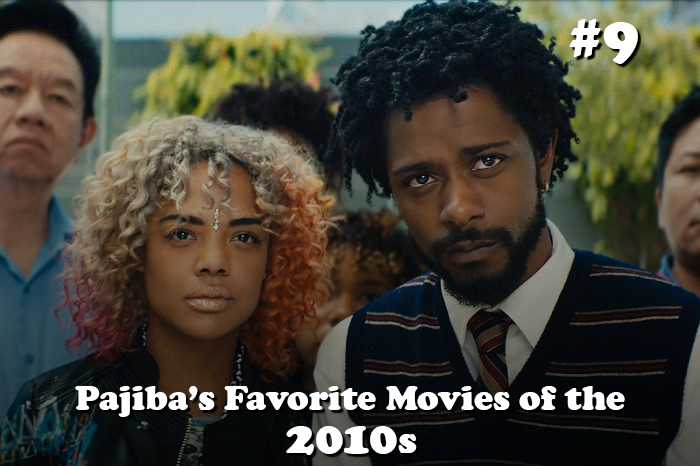 Some movies can be spoiled by a trailer that gives too much away, or an overeager tweet, while others can be outshined by their own end-credit sequences. Sure, it’s supposed to be the journey that matters, not the destination — but lately it seems like a lot of movies are comprised of a few shiny, memorable pitstops with very little in between. Which brings me to Sorry To Bother You, the antithesis of all that: A movie so dense that it’s impossible to say too much about it. It’s completely and utterly spoiler-proof! I could spend the rest of this article offering you a detailed scene-by-scene description of the movie and it would in no way lessen the experience of sitting down and watching it for yourself, precisely because it doesn’t hinge on any single standout moment. Instead, every moment is a standout, layered with philosophy and purpose and emotion and deep, deep humor, all zipping by with a light and confident touch. Which isn’t to say there aren’t surprises, of course (coughcoughhorsecock) — it’s just that knowing what’s coming still doesn’t prepare you for the impact of seeing how it all unfolds.

To be honest, I was hesitant to write up Sorry To Bother You for our decade-ending list because I’d already had the privilege of reviewing it last year, and I worried that I’d already made my case for it to the best of my ability. Then I rewatched it (thanks, Hulu!) and realized that I’d sooner run out of time to unpack all my thoughts about this brilliant movie than run out of topics to discuss. All the elements I loved the first time around still worked for me, though they were nearly buried under the weight of all the details I rediscovered. It’s got one of the most exciting ensemble casts of the decade — Tessa Thompson! Danny Glover! Steven Yeun! Armie Hammer! David Cross! Jermaine Fowler! All spearheaded by LaKeith Stanfield as the film’s baffled, sympathetic lead, Cassius Green — but I’d forgotten that Rosario Dawson, Lily James, and Forest dang Whitaker also lend their voices in pitch-perfect cameos. I knew how much I loved the soundtrack because I’ve listened to it constantly for over a year, but I’d forgotten how well the songs serve the scenes without pulling focus entirely. The inexplicable VIP room in the back of the dive bar, or the little bottle of good booze hiding inside the bigger one. The fact that Omari Hardwick’s character’s name is always bleeped out, or the hallway full of doors painted in inscrutable shades of green. The room full of white party guests demanding Cassius rap for them. The costumes, from Detroit’s confrontational earrings to Steve Lift’s array of cultural appropriation loungewear, and the way each choice so perfectly telegraphed the individual personalities of the characters. Every decision is rich with meaning. Every moment offers something unexpected.

Mostly, though, I was left in renewed awe over the feat that writer/director Boots Riley pulled off. A musician and first-time filmmaker, Riley casually threads the needle on a film that blends activism and art in equal measure. All of Sorry To Bother You’s disparate details and layers are guided by Riley’s confident hand, and it’s impossible to express just how well it all comes together. The movie offers a nuanced argument about the way capitalism exploits and dehumanizes workers for profit, using a little dystopian sci-fi, a little magical realism, a bunch of witty dialogue and some expert visual humor to construct a story that is as entertaining as it is opinionated. Better yet, there’s no sense that Riley ever struggled to prioritize any single message at the expense of another. He makes room to explore class AND race, angst AND anger, individuality AND social responsibility, without coming down on the side of one over the other or assuming the audience isn’t smart enough to follow all of it simultaneously.

In Cassius Green, Riley constructs a believable and specific hero that defies easy classification — a man that doesn’t fit in, but also a blank slate on which everyone else inscribes meaning. He’s angry but not angry enough, black but not black enough. His response to the rap demands at the party, where he leads the white crowd to enthusiastically chant “N*-er shit! N*-er shit!”, is one of the most uncomfortably incisive scenes in the film. He can’t rap well, but he knows how to deliver a rap that’ll work for them. It also perfectly encapsulated his true talent: Becoming the thing that other people want him to be. He needs a paycheck for his survival, but he also craves the feeling of “success” — of having someone tell him he’s worthy, even if his worth is the literal profit he can provide his company. The movie astutely identifies the way capitalism has convinced us to hang our own sense of self-worth on our job performance, and the way that system in turn makes it harder for individuals to find self-worth outside of the work force. Cassius makes a lot of wrong decisions in the course of the movie before he rights himself, but you always sympathize with him because his burden is so familiar — and because Stanfield invests the character with such genuine pathos. If he’s sold his soul, then we’re all just as guilty.

It would have been so easy for Sorry To Bother You to slide into blunt allegory and symbolism. After all, it’s a movie about workers unions, protests, and literal actual modern slavery, where the only way for the hero to succeed is to adopt a “white” voice. Instead, by taking each of its concepts to such ridiculous, insane extremes, it conversely invests them with even greater narrative weight and reveals the underlying reality of the whole endeavor. Dubbing Stanfield’s voice with Cross’s would have been a one-note gimmick if Riley didn’t follow the conceit through the whole movie; if Cross didn’t push his timing and delivery to greater heights, or if Stanfield didn’t invest so much in his lip-syncing performance. Hammer’s start-up CEO, Steve Lift, could have been a cheap caricature of a villain, conducting evil science experiments to turn his indentured workers into literal horse-power for his company while blowing 2-ft rails of cocaine, if he didn’t nail the unflagging self-assurance of a rich white man who absolutely believes that he not only has the right to turn his workers into mutants, but that doing so will make him a goddamn hero. Every seemingly throwaway element, from Cass’s garage bedroom to that insane “I Got The Sh#t Kicked Out Of Me” reality show playing on every TV, comes back for a payoff. In fact, no detail is ever wasted. Every science fiction or surrealist flair that might appear at first glance to simply be setting the mood of the film is proven to be essential to the fabric — the reality — of story.

And that’s what I keep coming back to — everything in the movie matters in a way I still find astounding, and better yet, none of it is too much! Sorry To Bother You starts with telemarketing and ends with Equisapiens, and there is not a single thing along the way that is extraneous. You really can have it all — sensitive existential crises, romance, societal criticism, philosophy, groundbreaking visual design and a banging soundtrack. And horse cocks!