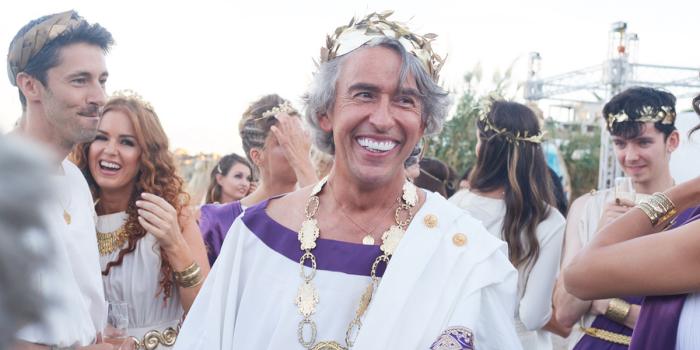 Review: When It Finds Its Footing, ‘Greed’ Is a Satisfying Takedown of Fast Fashion and Its Grotesque Masters But Its Aim Is Inconsistent

I’m sure, for a variety of legal reasons, that director Michael Winterbottom and his regular collaborator Steve Coogan would like to remind the audience that their latest film, Greed, isn’t technically a biopic of Philip Green. Nope, definitely not. This is merely a satirical drama about a British billionaire most famous for a high street retail chain who has been involved in a variety of controversies related to suspect business practices and the exploitation of thousands of people. See, it’s totally not about the gargoyle who runs Topshop, doesn’t pay his taxes, uses sweatshops, and was charged with misdemeanor assault. No, for the differences are subtle but crucial for that legal distinction. But let’s be honest here — Greed is totally about Philip Green.

Coogan plays Sir Richard McCreadie, the self-described king of the high street, as he gathers his ‘friends’ on the island of Mykonos for his 60th party. The theme: The movie Gladiator, and to add some authenticity to the proceedings, he’s forcing the underpaid locals to build a miniature version of the Colosseum for some good old-fashioned lion-baiting. It’s all in good fun, he insists, but it’s also a way for him to give a royal ‘f*ck you’ to his doubters after a recent Parliamentary inquiry into the various bankruptcies he’s overseen left him in need of a PR shakeup. His ex-wife (Isla Fisher) and his children, including his reality TV star daughter, will be there, as will Nick (David Mitchell), the harried journalist who has been hired to write the authorized biography on his life. It is through Nick’s work that we see how Richard became very wealthy and utterly despised.

The impact of this particular angle may not pack the same punch for American viewers as it does to us Brits, where Green has been a dominant media figure, Conservative Party supporter, and public enemy number one following his exploitation of the BHS chain that ended with his own family pocketing hundreds of millions of pounds while thousands of workers lost their jobs and pensions. Mocking a figure like this isn’t necessarily hard, as evidenced by Coogan going hard with the fake tan and horrifyingly white veneers, but Greed is at its best when it eschews the semi-fictionalized biopic in favor of cold hard facts.

Winterbottom and Coogan have made a formidable duo in the past, from capturing the heightened frenzy on the Manchester music scene in 24 Hour Party People to the metatextual hilarity of A Cock and Bull Story, and the addition of Rob Brydon to their party brought us sublime comedies in the form of The Trip trilogy. Winterbottom, in particular, has never been one to settle on a specific style, theme, or intent with his work. He’s endlessly prolific and giddily jumps between comedy, drama, documentary, and experimentation, happy to find satisfaction in the process even if the work doesn’t succeed (hello, 9 Songs.) With Greed, we see him returning to a more decidedly mainstream approach. This is a film intended to be seen by as many people as possible, in part because it’s a relatively conventional comedy with an obvious punching bag at its center, but also because he wants to offer an important lesson in the economics of fast fashion. This is activist film-making: Ken Loach with sunnier locations and professional actors, if you will.

Nick is given access to nearly every part of McCreadie’s life: His ex-wife is candid about their professional and personal collaborations, including how she was able to get him crucial funding and loans that inflated his wealth; his former colleagues practically spit out his name as they reveal his cruelty and oft-overlooked ineptitude; fellow journalists explain how McCreadie’s use of tax havens, loopholes, and government connections allowed him to buy up businesses on the cheap, bleed them dry, then leave them to rot as he pocketed the profits. As part of his ‘Happy Birthday’ video for McCreadie’s party, Nick has his ‘employees’ at the sweatshops join in on the ‘fun’. The message is clear: This is what an entire industry of fashion is built upon, and under capitalism, only the people at the top prevail.

Winterbottom works best when he has a laser-focus on an idea or theme. Greed is at its best when it knows exactly what it wants to do and how it wants the audience to feel. When it’s aiming more for conventional sweary comedy, it’s less successful. The party organization features some very funny scenes, particularly with McCreadie’s daughter and her reality TV show crew tagging along at every opportunity (to drive the Philip Green parallels even further, Winterbottom cast Made in Chelsea star Ollie Locke, the ex-boyfriend of Green’s own daughter, as the boyfriend here.) The most spot-on moments of satire come when McCreadie’s world of obscene wealth clashes with the Syrian refugees staying on the nearby beach who are roped in to be his Roman slaves for the party.

The film is often too reliant on the idea that McCreadie being a profane bigot and bully is inherently funny. It’s okay to laugh, you see, because we know he’s a bad guy and we’re not bad if we laugh at him hectoring South Asian factory workers or the women he intimidates. Not even Coogan’s evident comedic charm can make this land, especially when such scenes are immediately contrasted with the very serious dissections of how exploitative these painfully real practices are. Winterbottom wants us to learn but his attempts to sugar-coat the economic lesson in some laughs feel at odds with his worthy agenda. McCreadie is clearly a pathetic figure, a severe case of Napoleon Complex blended with the toxicity of Thatcherism, and Greed is thankfully never enamored with him in the way so many of these stories are, but the script still gives that occasionally stomach-lurching feeling that we’re supposed to laugh with him and not at him. Surely that defeats the entire point of the story?

The message is in the words for Greed, which means that the filmmaking itself is bog-standard and done as quickly as possible (Winterbottom works at an alarmingly fast rate, the kind of speed that would make Takashi Miike and Steven Soderbergh feel lazy.) That means we get a lot of montages set to creakily obvious music choices — yes, ABBA’s ‘Money Money Money’ does play here — and second unit shots that could have come straight out of stock footage reels. It’s a shame because the style could have greatly strengthened the message if Winterbottom had played his cards right. The reality TV scenes with McCreadie’s daughter, and the way they highlight the hyperreality of celebrity and its artifice, work so well that you can’t help but wonder why the whole film isn’t like this.

It’s certainly important to listen to what Greed has to say, and overall it’s a worthwhile, if somewhat frustrating, watch. It’s another example of Winterbottom doing the work and seeming uninterested in its impact once it leaves the editing room, but given that this is also a film intended to be a mainstream hit for people to learn from, those frustrations boil to the surface with greater urgency. On the plus side, it’s definitely going to piss off Philip Green, and I always endorse that.

Greed will be released in the U.K. on February 21st.