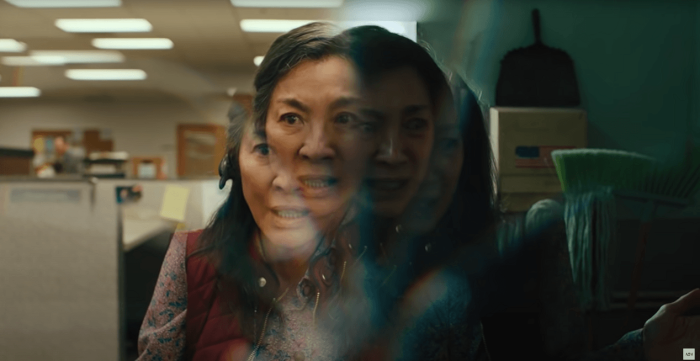 We already know about Marvel making their stamp on the premise of alternate realities. But now The Daniels, the writer/director team behind Swiss Army Man, want to put their spin on the concept with their new feature, Everything Everywhere All At Once.

Watch the trailer for EVERYTHING EVERYWHERE ALL AT ONCE, an epic sci-fi/kung fu adventure from mad geniuses @Daniels and starring legends only, Michelle Yeoh, Ke Huy Quan, James Hong, and Jamie Lee Curtis. In Theaters March 25! pic.twitter.com/LHUKo2n0pm

Yeah, gotta say, that certainly looks like the handiwork of the brains responsible for Lil Jon’s “Turn Down For What” music video.

Also, look at that cast. You have Stephanie Hsu (Shang-Chi and the Legend of the Ten Rings, ironically replacing Awkwafina who left due to scheduling conflicts), Ke Huy Quan (Finding Ohana, Data from The Goonies!!!), Jamie Lee Curtis (Halloween franchise, Knives Out), and the utter legend James Hong (600+ credits, just pick one), as well as Harry Shum Jr (Crazy Rich Asians) and Jenny Slate (Obvious Child). And lots of googly eyes (the big-screen debut of Charl, perhaps?).

And of course, Michelle Yeoh (Crazy Rich Asians, Shang-Chi) who plays Evelyn Wang, described as “an exhausted Chinese-American woman just trying to get her taxes done.” She ends up being (or maybe already was?) recruited into a battle over the multiverse and having to tap into the memories and skills of her alternate selves.

Really reminds me of The One (which starred Yeoh’s previous co-stars Jet Li and Carla Gugino). Fun fact: Quan himself was a stunt choreographer on The One (as well as the first X-Men film) as the assistant to Corey Yuen. It looks like he will be using his skills on-screen this time if that scene with the waist bag is any indication.

Everything Everywhere All At Once will open at SXSW and debuts in theaters on March 25, 2022.

Hell yeah. Across the Yeohniverse