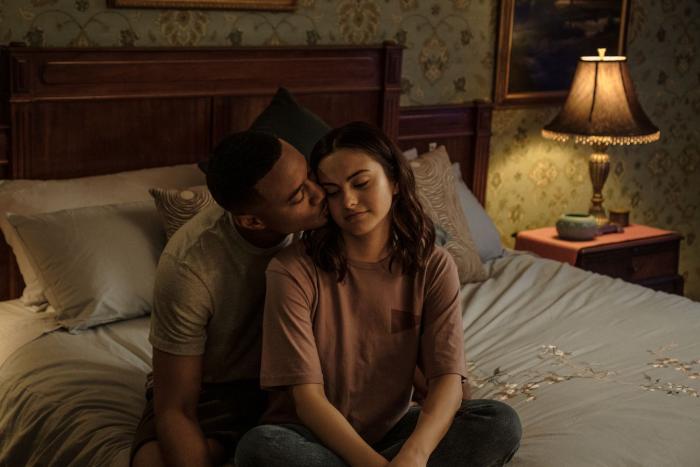 The Ending of Netflix's 'Dangerous Lies' Explained, for Morons (Plus, Some Movie Website Inside Baseball)

For those of you who do not run movie websites, here’s a little inside baseball: There’s a particular genre of post that we in the business sometimes write not for our everyday audiences but for search engines. They are called SEO posts, designed to capture drive-by Googlers searching for an answer to a movie or pop-culture related question. Some sites dabble in them, as we do, while it’s the main generator of revenue for some other bigger sites, which layer a few brand-specific posts over hundreds of SEO posts largely hidden from their core audiences.

There’s a few particular kinds of these posts. The worst is probably the, “Will there be a second season of [Insert Title] show?” We can’t afford to produce enough content to bury our SEO posts, so if we write them, we do our bests to make them appealing to both random Googlers and our regular readers. So, for instance, when I write one of those posts, the SEO headline (or what people on Google see) might read, “Will there be a third season of Travelers?” but the public headline would be, “The second season finale of Travelers was B-A-N-A-N-A-S.” My post would be about the season finale, and I’d add a stinger at the end of the post about whether there might be another season to answer the question posed in the SEO Title.

Most sites, however, will have someone who has never seen the series write 1,000 words with subheads on whether there will be a second season based on no public information. Here’s an example, for instance, from Men’s Health, where they write a post about whether there will be a second season of The Eddy, a series that debuted on Netflix today. Men’s Health does not know the answer to this. No one does. But Men’s Health — which is a fitness magazine, by the way! — quickly wrote a post speculating on a second season to capture binge-watchers on Google who finish the series over the weekend. There is absolutely nothing of value in that post and nothing that the average viewer cannot discern on their own, but it will probably generate a lot of traffic, which will help support the magazine’s ability to write articles about … men’s health.

Another category of this post is the, “[Movie Title] Ending Explained,” post, where we explain the ending to a movie or TV show to the thousands of people who watch a movie or tv show and need that ending explained to them. Sometimes, these posts can be of value, particularly when the ending is ambiguous or when they require some interpretation (like, for instance, this one for The Platform). The first season of Beforeigners also left some questions.

Much of the time, however, these “endings explained” post spend 1,000 words explaining an ending completely obvious to anyone who has half a brain. That’s this post, which is about the ending of Dangerous Lies, a terrible but very popular movie on Netflix starring Camila Mendes (Riverdale), Jessie T. Usher, and Cam Gigandet. It’s not only a spectacularly bad movie, but it’s a movie that our core readership has little to no interest in. And yet, sometimes we write these posts anyway because they might do well with outside readers, and we need extra sources of traffic to survive. We are not the only ones, obviously. Here’s one from Esquire. Here’s one from Refinery29 (one of the best, along with Bustle, at these facile SEO posts. That’s not an insult.).

These posts ultimately are written for morons or people who lose interest in a movie halfway through but still want to know the ending. There is zero ambiguity to Dangerous Lies, which is about caretaker, Katie (Mendes), looking after an older gentleman, Leonard (Elliott Gould). When Katie and her husband, Adam (Usher) fall on hard times, Leonard hires Adam to work as a gardener. In the meantime, a sketchy real-estate agent, Mickey (Gigandet), is aggressively trying to buy Leonard’s house.

One morning, Katie arrives at Leonard’s house to care for him and discovers that he’s dead. Leonard, who had no survivors, leaves — via his lawyer, Julia (Jamie Chung) — his entire estate to Katie, the caretaker he has only known for four months. Four months! Hidden away in Leonard’s house, Katie and Adam discover $100,000, some diamonds, and a dead body.

Trust me, it sounds more interesting than it is. It’s a sh*tty film, but for the morons, here’s how it ends (Spoilers). Detective Chesler (Sasha Alexander, better known as the Isles of Rizzoli and Isles fame) obviously suspects Adam in the murder of Leonard because Adam is the only black character in the movie (also because Adam pulls some shady shit, like breaking into Leonard’s house and almost stealing his money before it has been willed to Katie).

Anyway, cut to the end of the film, where we find out that the aggressive real-estate agent had partnered with the former gardener (now deceased) to kill Leonard and steal the diamonds (which are very, very tiny). The real estate agent breaks in the house, and he gets into a gunfight with Adam. Both die. As Katie is screaming/grieving, the lawyer walks in to offer support, only … we discover that the lawyer was in on it with the real-estate agent. She demands to know where the diamonds are and holds a gun to Katie’s head, but at that moment, the detective walks in and shoots the lawyer.

Cut to four months later, and somehow Katie is apparently 10 months pregnant with Adam’s child, and she’s working in the garden when the detective pays her a visit to see how she’s doing. Fine, fine, Katie says, before the detective asks her if she knows where the diamonds are. “Nope,” Katie says. “Fine, then,” the detective says before walking away. The camera zooms out and water from the sprinkler uncovers the diamonds, buried in garden. Adam’s last words before dying were, “The *cough cough* garden,” and now we know why.

That’s it, moron. Now you know.