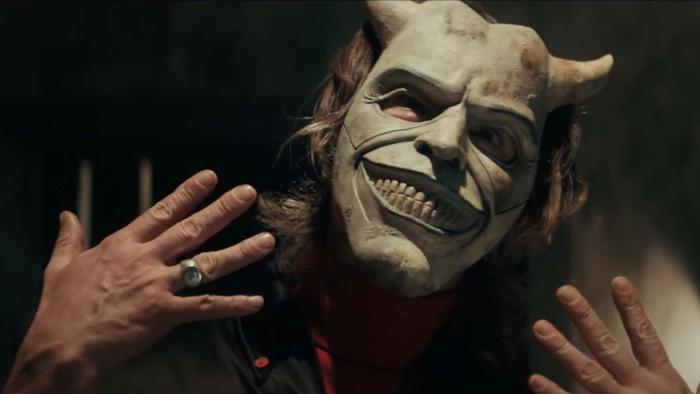 'The Black Phone' Is a Spooky, Scary Horror Movie with a Capital 'H'

What can I say? I’m a horror fan and The Black Phone is certainly a horror movie. It reminds you of it a few times, in fact, not just with jump scares and blood effects, but with characters naming The Texas Chainsaw Massacre and donning ’80s garb. It was easy to feel cynical, walking into another Scott Derrickson and C. Robert Cargill vehicle (the pair co-wrote, the former directed) from the studio close to monopolizing horror flicks, awash in nostalgia and Stephen King references. But when The Black Phone dropped its first big scare, and the audience around me yelped, my cynicism was washed away and replaced with the popcorn gobbling grin I usually don when seeing a horror feature at the ol’ multiplex.

The Black Phone looks a bit like a sepia-toned Stranger Things (which looks like a blue-toned-everything-else). It takes place in a town that’s decidedly not Derry, but still has mullet-clad bullies on bikes and a smattering of supernatural magic. Finney (Mason Thames) is one such kid on a bike, a chap slowly learning to stand up for himself in the face of bullies. In this quiet town, where kids all hop home after the last school bell, there’s a looming presence. It’s that of “The Grabber,” (Ethan Hawke) an unknown villain that is the suspected culprit behind multiple missing boys. Police stumble through their limited evidence, struggling to zero in on the kidnapper. Then, just like that, Finney becomes the next face ripe for the “Missing,” poster.

Finney’s sister, Gwen (Madeline McGraw- in a “fiery little sister” role that rivals Stranger Things’s Erica Richardson played by Priah Ferguson) has dreams, the kind of clairvoyant dreams that could lead her to the missing boys. Her gifts are up against The Grabber’s villainy and are racing alongside Finney’s own caper. Locked in a basement and facing off against the masked villain, Finney needs to use every resource around him to try and escape lest he become the boy to never return home.

For better or for worse, this is a horror movie by horror fans for horror fans. It might not be the references clad cohorts that populate Netflix streams, but it’s based on a short story by Joe Hill, is full up with King references (bullies, small towns, a yellow raincoat, a girl with power, and her oppressive parent…), and mentions of horror classics with the purpose of getting the audience to fawn. But for all of that fluff, it ultimately morphs into a superb horror flick with a gag that adds something special to the “trapped in a basement,” sub-sub-genre. As soon as a victim is locked in a dungeon, it’s difficult to do much more than showcase failed escape attempts. Split played games by having the captor toggle personalities and give the hostages something to work around. The Boy Behind the Door used an additional character’s POV and kept the film mostly silent. The Black Phone uses a trick to push Finney along through escape plans in a way reminiscent of a video game. Once this bit sets off, it holds together all of the pieces of nostalgia and flimsy character moments that are otherwise window dressing.

Though another period piece that takes us back to the times of pinball machines and denim vests, the time period beat really amplifies the scares. Kids of the ’80s and ’90s will be familiar with the nagging fear of strangers and a van. Kids of this era were oft herded into the living room by a parent to catch a segment on Oprah about how to avoid getting snatched by clutching your bike or making sure your hair wasn’t in a ponytail. Tapping into this era-specific fear, The Black Phone makes its setting worth something in the way Escape Room came for our era specific fears of quicksand and acid rain.

For the affair, Ethan Hawke sheds his horror persona of Sweater Dad for one of Sweater Villain. Getting to flex some different muscles than usual, he completely dives headfirst into the performance as a menacing and terrifying baddie. He’s so stellar, in fact, that he stands out amongst the otherwise so-so (save for the return of the actor behind Office So and So) of the others. Aside from McGraw who steals all of her scenes, Hawke is operating on a completely different level from everyone else which makes it a bit tough to feel enveloped by the world.

And of course. There’s the mask. Horror legend, Tom Savini, brought The Grabber’s mask to life and the film has an absolute blast with it. The Grabber wears a multipart mask with swappable expressions that are paired with Hawke’s acting in a way that creates a haunting vision of the character. At its most stunning moments, Hawke’s eyes are teary and downturned while the mask is but a grinning bottom half. There’s a moment where his mask is hidden in darkness until he has an “unexpected” upset reaction, before revealing the upset version of the mask. This moment uses the accessory that makes all kinds of implications about the character’s thought process. The mask, an item often used in horror to make a slasher killer anonymous and faceless, is instead, used here to create character beats and make him all-the-more menacing in an innovative way.

While this film made me clap, cheer, scream, and remember just why the hell I got into this genre, it’s imperfect. If I didn’t mention the abusive father in the synopsis, it’s because it didn’t matter nor add anything to the story but an uncomfortable scene. This is a story about Finney’s growth and Gwen’s independence and didn’t need any more beats (none intended) to drive that home other than their school reactions. The bloodier elements and reveals did more to take me out of it than pull me in but they’re reminiscent of the elements in Sinister so they make sense as part of the creators’ forged style.

The Black Phone is a spooky, scary Horror movie with a capital “H” that did everything to remind me why I love a good fright. The multi-faceted genre taps into all kinds of themes and scares, and The Black Phone is the type of outing that let’s you have a simple scare, carried by a wonderful gag, and a dynamic mask. How magical.