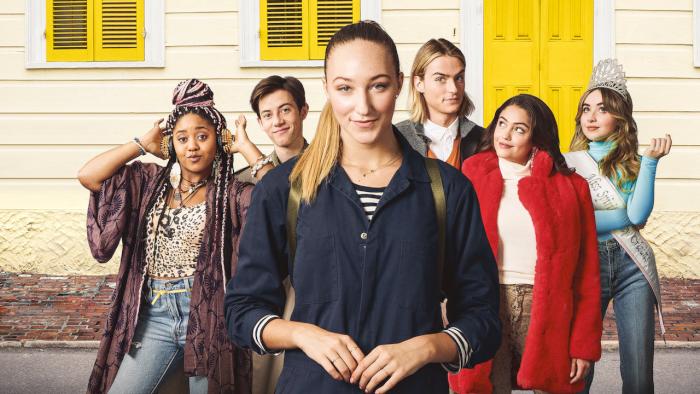 Stream It Or Nah: Netflix's 'Tall Girl' Is Low-Hanging Fruit

Netflix’s teen rom-com Tall Girl, about a teenage girl who feels marginalized by her tallness, is an almost too easy target for our think-piece culture, and I’ll concede the film’s premise (and trailer) elicited half a dozen eye-rolls before I forced myself to watch it to see if it was worth the “controversy.” And the thing is: I completely understand why a movie about a conventionally attractive teenager who comes from wealth and has loving parents (played by Steve Zahn and Angela Kinsey) but who feels alienated because of her height might read as tone-deaf in this socio-political era.

Honestly, it is tone-deaf, but try telling that to a tall teenage girl. Roger Ebert used to preach about reviewing films from the perspective of the target audience. When you’re 15, everything that makes you different from others can feel alienating — those differences we appreciate about ourselves when we’re older are often sore spots in our teenage years. I was on the bottom goddamn rung of the socioeconomic spectrum when I was a teenager, ate one meal a day because we couldn’t afford school lunch, and I went home to a houseful of addicts getting high in my living room on most nights, but you know what I obsessed about the most? My crooked, misshapen teeth, which I always kept a hand over when I smiled. It was hardly the most alienating characteristic of my life, but don’t tell that to 15-year-old me.

The height of Jodi Kreyman (Ava Michelle) in Tall Girl is an objectively silly thing to get worked up over, but it’s also a decent stand-in for any other differences that set us apart as teenagers. In Angus, it was the title character’s weight; in The DUFF, it was the delusion that Mae Whitman could qualify as anyone’s “ugly fat friend,” and in She’s All That it was Laney Boggs’ … I dunno, glasses? It could be anything. It’s just that in Tall Girl, screenwriter Sam Wolfson chose height.

If one wants to make a big deal out of that, that’s fine, but it hardly seems worth the effort for an otherwise harmless not-very-good teen flick that will probably nevertheless make a lot of tall teenage girls feel seen. It’s a trifling formulaic teen movie about a girl named Jodi, whose classmates make fun of her by repeatedly asking, “How’s the weather up there?” There are infinitely worse things, but also, I’m not sure why it’s necessary to compare Tall Girl to worse things because the intended audience is a tween’s birthday sleepover party. Most of that audience is sophisticated enough to know how dumb this premise is but also not really care because they’re among friends and eating snacks in their PJs.

The premise is pretty basic: Jodi’s classmates make fun of her, and she feels alienated, but when a tall Swedish exchange student, Stig Mohlin (Luke Eisner), transfers to her high school, she falls madly in love. The catch is, Stig ends up with Jodi’s tormenter, Kimmy Stitcher (Clara Wilsey), a popular but insecure girl who bullies Jodi about her height. Jodi, meanwhile, also has a Ducky in Jack Dunkleman (Griffin Gluck), an average-sized kid who is smitten with Jodi, but Jodi won’t give him a second glance because she fears their height-differential will make her an even bigger social pariah. (Dunkleman, like Ducky, is a charming doofus who has a lot of problems with personal and emotional space — don’t be a Dunkleman, kids.)

It’s not hard to see where all of this is headed if you’ve ever seen a teen movie in your life. There’s a big romantic gesture, a misunderstanding or three, some bullying, a big speech at prom, and a pair of high-heel shoes for the tall girl once she finally decides to own her height. It’s all very silly and inconsequential, but also sweet in a way that its tween audience will appreciate. The lesson is familiar, and it’s not really “Be proud of how tall you are” it is “Celebrate what makes you different.”

Is it tone deaf? Yes. Will most teenagers make fun of it? Absolutely. But will some of them still watch it and feel some empathy for what makes Jodi Kreyman feel different? Probably. Should teenagers instead spend their time watching Easy A or Love, Simon? Yes! Is it the end of the world if they waste 90 minutes watching Tall Girl? No, not really.

More Stream It or Nah