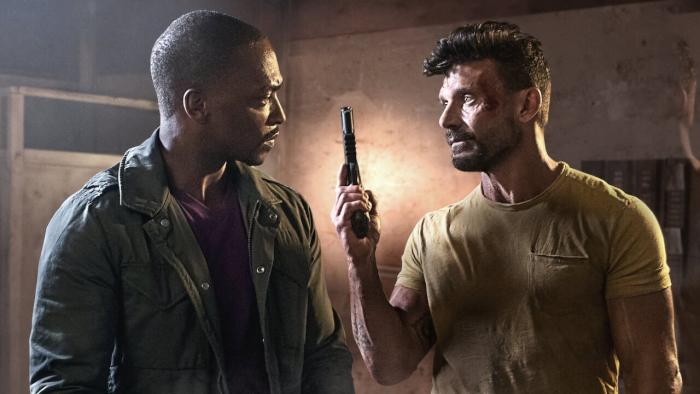 Netflix’s latest original film, Point Blank, stars two players from the Marvel Cinematic Universe, Anthony Mackie and Joe Grillo, but honestly, it’s far more in line with the movies one might associate with Grillo. It’s a remake of a 2010 French movie, and as action thrillers go, Point Blank is about as generic as they come, which is to say, it’s also in line with the lion’s share of Netflix original movies.

Directed by Joe Lynch (Mayhem, Wrong Turn 2: Dead End), Grillo plays a generic thief, Abe, who is implicated in a shooting. As he’s fleeing the scene of the murder, he’s run over by the runaway car driven by his generic brother, Mateo (Christian Cooke). Abe’s placed in the hospital and put under the care of Paul (Mackie), a generic doctor with a generically pregnant wife (Teyonah Parris). In an effort to retrieve his brother, Mateo kidnaps Paul’s wife and tells him that he’ll only release her if Paul helps Abe escape from the hospital. While escaping, Paul and Abe are pursued by generic detectives played by Marcia Gay Harden and Boris McGiver.

It’s typical action movie fare: There’s a flash drive MacGuffin, a dirty cop, a lot of mediocre chase sequences, and a few shootouts. Meanwhile, Paul and Abe bond while on the run, and they eventually join forces to take on the corrupt cop (the plot is remarkably similar to another generic action film released this weekend, Stuber, only Dave Batista and Kumail Nanjiani have a lot more chemistry together).

It’s not a bad film, but it is wholly unexceptional. It’s precisely the kind of film tailor-made for Netflix — the sort of movie you wouldn’t want to pay to see, but that makes perfect sense to watch on your laptop while you’re scrolling through Instagram. It’s about what one would expect from a streaming service whose monthly subscription fees are less than the price of one movie ticket. In this case, you get what you pay for. It’s not a good film, but it’s a perfectly serviceable 90-minute timekiller.