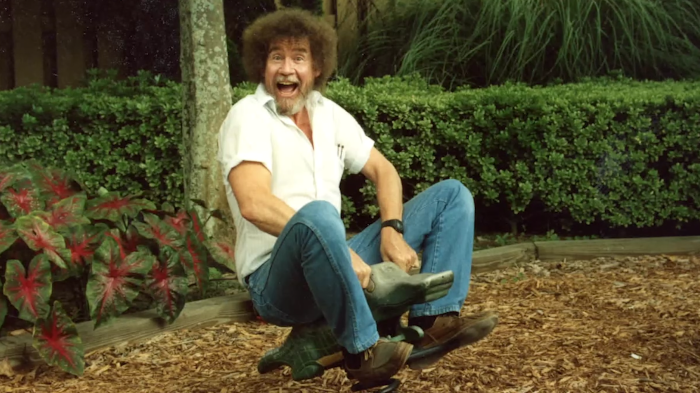 “Betrayal” and “greed” are two words one does not typically associate with Bob Ross, the soft-spoken painter famous for The Joy of Painting, a long-running PBS series in which Ross would complete a landscape painting in under 28 minutes. Thanks to the Internet and our culture’s occasional need for things that are pure and uncynical, Ross’s popularity has only increased since his death after a long battle with non-Hodgkins lymphoma.

One might imagine that the death of a figure as popular as Bob Ross at such a young age (he was only 52) might have elicited more coverage than it did on Independence Day 1995, but media coverage was spare and even his funeral was sparsely attended. Part of that was because Ross was an intensely private person, but the other part was because — according to Bob Ross: Happy Accidents, Betrayal & Greed — his business partners at the time, Annette and Walt Kowalski, wanted to keep it quiet, concerned that news of his death would cut into their profits. It’s that business relationship where the “betrayal and greed” enter the equation (and a little bit of sex and deceit, as well).

The good news is that the documentary film, directed by Joshua Rofé and produced by Melissa McCarthy and Ben Falcone, is not likely to disturb anyone’s affectionate feelings for Ross. By most accounts, the Bob Ross we saw on television (and YouTube) was not far removed from the Bob Ross people knew when the cameras were turned off. He was a thoughtful, loving man who liked to paint, and aside from some light philandering (including an alleged affair with business partner Annette Kowalski), his life was largely free of controversy, although the documentary does provide some newer insights into the origins of The Joy of Painting.

The betrayal and greed largely came after the death of Ross, and the victim was his son Stephen Ross, a similarly soft-spoken painter who, likewise, looks as though he’s still trapped in the 1980s. Stephen, who made a couple of appearances himself as a young man in The Joy of Painting, provides the lion’s share of commentary in Bob Ross: Happy Accidents. He paints a damning picture of the Kowalskis as ruthless business people who care less about Bob Ross and his legacy and more about the profits they could accrue from it.

It’s an all-too-familiar story, one with which we might have more sympathy, given how beloved Bob Ross was. But to be fair to the Kowalskis, they didn’t do anything illegal. Nefarious, perhaps. But not illegal. Ross was not a savvy business person, and he didn’t structure his legal contracts or his will in a way that best protected the interests of himself or his son. The Kowalskis had better lawyers, and Stephen got screwed by Bob Ross’s half-brother. It’s a story as old as time.

It does not, however, diminish one’s sympathy for Stephen, who is legally barred from using even his own name to promote his own lines of merchandise. Granted, Bob Ross: Happy Accidents, Betrayal & Greed is a decidedly one-sided story since Chuck Ross and the Kowalskis refused to participate because they were probably too busy counting the cash they have accrued from exploiting Ross’ name. Still, the story makes for a compelling documentary, if only because it offers another chance to spend time with Bob Ross, learn a little more about what made him tick, and visit with some of the people whose lives were positively affected by the painter. It’s not a bad way to spend an hour-and-a-half.

Bob Ross: Happy Accidents, Betrayal & Greed will be available to stream on Netflix on August 25, 2021.