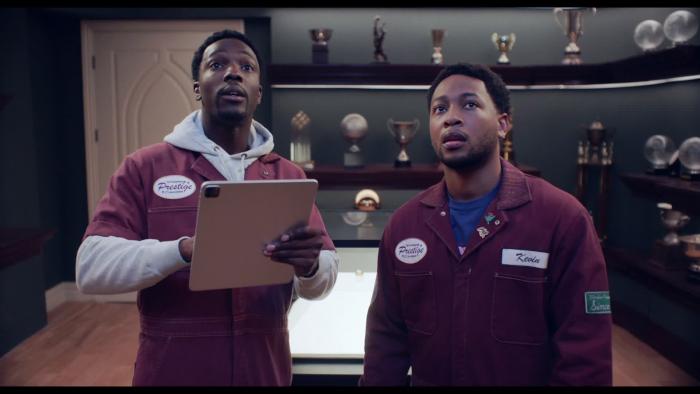 Review: 'House Party' Is Not a Party Worth Attending

SO WHAT SHOULD I KNOW ABOUT THIS SERIES BEFORE READING YOUR REVIEW?: There’s an actual beheading in this film that’s bloodier than anything that was shown in Highlander. So if you’re squeamish, you should probably know that if and when you decide to watch it.

REALLY? THAT’S WHAT I NEED TO KNOW ABOUT HOUSE PARTY AT THE START OF THIS REVIEW?: Yup! Oh, and there will be spoilers. Let’s get started, shall we?

WHAT IS THIS MOVIE ABOUT?: Kevin (Jacob Latimore) and Damon (Tosin Cole) are two best friends who clean homes for a living by day, and work as party promoters by night while hoping to achieve their own personal and professional goals: Kevin composes beats at home and wants to earn enough money to put his daughter into preschool and to move into his own place. Damon (pronounced Da-MON, like the French way) simply wants to become rich and successful enough to throw the kind of parties that are attended by A-list celebs and beautiful women who would be impressed by his ability to throw such parties.

When Kevin and Damon are both fired after they’re caught smoking The Devil’s Lettuce on camera during one of their cleaning assignments, they both decide to throw a massive party at the mansion they are currently working at…a mansion that both Kevin and Damon soon discover belongs to LeBron James, who is on a meditation retreat in India for the next two weeks. With the help of Venus (Karen Obilom), their friend and former colleague from work, Kevin and Damon hack into LeBron’s tablet and contact his longer-than-a-receipt-from-CVS list of celebrity friends, while also spreading the word on social media that their secret party (where phones aren’t allowed to keep the police and possibly LeBron himself from finding out) is the place to be. Now all they need to do is earn enough money from the entrance fees, make sure everyone has a good time and that the party doesn’t get out of control, and hope that a vengeful trio of rival party promoters named Larry, Kyle, and Guile (Melvin Gregg, Allen Maldonado, Rotimi) doesn’t show up to ruin everything and make things worse. What could go wrong?

IS THIS A REMAKE OF THE ORIGINAL HOUSE PARTY FROM 1990?: It’s both a remake and a reboot, especially since it doesn’t have much in common with the original film. The 1990 version was about teenagers trying to throw a house party while one of their parents is away, and this one is more adult-oriented with an entirely different storyline and cast of characters.

As a bonus, we get a couple of nods to the original House Party, as Kevin and Damon are watching it in the theater that’s in LeBron’s mansion followed by the two of them doing the Funky Charleston (better known as the Kid ‘N Play Dance) in their dance-off against Venus and R&B singer Tinashe.

LET’S START WITH THE GOOD. WHAT ARE THE THINGS ABOUT HOUSE PARTY THAT WORKED?: The performances from the main cast are somewhat decent. Some of the funniest lines come from the rival party promoters and their overly elaborate threats. (If you’re familiar with the “Torture” skit from the Wu-Tang Clan’s debut album, you’ll probably appreciate the explicit details in these threats that make it impossible to take them seriously.) Kid Cudi gives one of the best and funniest performances in the film. Some celebrity cameos help make the film a little more fun and watchable. There’s also a funny blooper reel during the closing credits.

WOW, THAT DOESN’T SOUND LIKE GLOWING PRAISE. SO WHAT ARE THE THINGS ABOUT HOUSE PARTY THAT DIDN’T WORK?: The script for House Party 2023 was written by Atlanta writers Stephen Glover and Jamal Olori, but this film isn’t as funny or smart or well-written or memorable as that series, despite Kevin’s opening narration stating that “some crazy beautiful, weird-ass sh-t [is] about to go down!” Latimore, Cole, and Obilom are talented actors, but they aren’t given any material to work with that makes us care about their characters or about what’s happening to them. The party itself has a couple of fun moments, but the party and the actual film are too heavily reliant on celebrity cameos. We get to see Snoop Dogg, Mya, Lil Wayne, Lena Waithe, Juvenile, and others show up, but their screen time is minimal, and it does seem as if they’re mostly expected to make the film funny and awesome instead of the main characters themselves. The only celebrity cameo that really works is Kid Cudi’s, and that’s because all of his screen time has him basically playing Darius from Atlanta, but he makes it work. (Though I will give Lena Waithe some props, if only because of the responses she gets to her marijuana-induced idea of remaking Roots.) 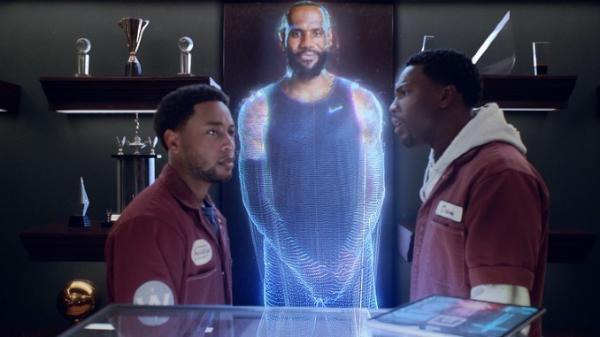 Very little about the party itself is fun or funny or even relatable. In the original House Party, there were certain personalities at Play’s party who you would probably recognize from any real-life house party that you may have attended: There’s the one who complains about how this party has no food or drinks. The one who gets White Girl Wasted and expects everyone else to get drunk with them in order to have a good time. The one who shows up at the party, only to end up falling asleep. The one who does way too much when they’re on the dance floor, resulting in the DJ table being bumped into, or their dance partner instantly wishing that they were dancing with somebody else. The one who shows up at the party, only to end up falling asleep throughout the whole thing. And of course, the one who thinks he’s simply irresistible to the opposite sex, when in reality, he’s anything but. There are no other characters at the party to make us laugh or make us even want to pay attention to in House Party 2023, not even DJ Vic (D.C. Young Fly), whose entire personality is comprised of him wanting to find some liquor and get drunk, even though Kevin and Damon forbid him from doing so so he’ll focus on his gig. And by the time the Illuminati is introduced in the film, and things really do get weird and twisted in ways that remind us of Atlanta at its very best, it’s too late and it’s not nearly enough to keep the film afloat.

HOLD UP, THE ILLUMINATI IS IN THIS?!: Yes, they are. The real Illuminati that Jay-Z and Beyoncé and Lady Gaga are (allegedly, allegedly) a part of, not the Illuminati from Doctor Strange in the Multiverse of Madness. They show up in the third act when Kevin and Damon find themselves up to their eyebrows in sh-t, and Kid Cudi-as-Darius 2.0 agrees to help them out.

YOU MENTIONED CELEBRITY CAMEOS. DOES LEBRON ACTUALLY SHOW UP?: Outside of the self-congratulatory hologram that he has in his own trophy room, yes, he does show up towards the end of the film.

REALLY? IS HIS ROLE IN HOUSE PARTY BETTER OR WORSE THAN HIS ROLE IN SPACE JAM 2?: I still haven’t mustered up the courage to sit down and actually watch that movie (As someone who willingly sat through The Room, The Velocipastor, Joss Whedon’s version of Justice League, and twenty-five chapters of R. Kelly’s Trapped in the Closet, that’s saying a lot), so I couldn’t tell you. LeBron’s scenes are mostly of him throwing a very understandable conniption fit about the party being thrown in his house, and of him being challenged by Kevin to a game of one-on-one basketball to prevent the cops from being called. The most I’ll say about it is that it’s very similar to a gag that was done with Michael Vick in Season 2 of Atlanta, and that gag was much funnier.

Speaking of gags in the film that were funnier in other shows: There’s a scene in which a koala gets marijuana in its system and goes on a violent rampage more than once. All of which is very similar to the “That ain’t no damn puppy” scenes from Martin back when he, Gina, Pam, and Tommy went on vacation to Chilligan’s Island, and that gag was also much funnier.

THIS DOESN’T HAVE ANY HOMOPHOBIC RAPS IN IT LIKE THE ORIGINAL, DOES IT? BECAUSE THOSE SCENES REALLY DIDN’T AGE WELL: They most certainly didn’t, and I’m glad to say that there are no scenes like that in this version of House Party.

DO KID ‘N PLAY SHOW UP IN THIS FILM?: They do, but it’s a brief and wordless cameo where it’s revealed that they are also members of the Illuminati.

TO SUM IT ALL UP: I get that Calmatic, who directed the film, wasn’t trying to do a scene-by-scene remake of House Party, and I agree with him in that every generation deserves their own version of House Party. But none of that changes the fact that this version wasn’t as funny or as good as it could’ve and should’ve been, and it doesn’t even have the same level of heart as the original, which touched upon social issues while still making the audience laugh. House Party 2023 was originally intended to premiere on HBO Max as a digital release, but in one of many questionable decisions made by Warner Bros. Discovery since their merger went into effect, it was decided that instead of letting it premiere on a streaming service for millions of subscribers to watch at home, the film should premiere in movie theaters instead … with very little marketing to let people know about its existence, and with commercials and reviews that have done very little to convince people that it deserves as much attention as Avatar: The Way of Water and M3gan.

When there’s nothing in your remake/reboot/remix that comes close to being as hilarious as an old Black man leaning out of his bedroom window and telling kids to shut up with all that damn noise, it’s not a good sign. So either wait for this to start airing on HBO Max as originally intended, or just skip it and watch the original House Party instead.