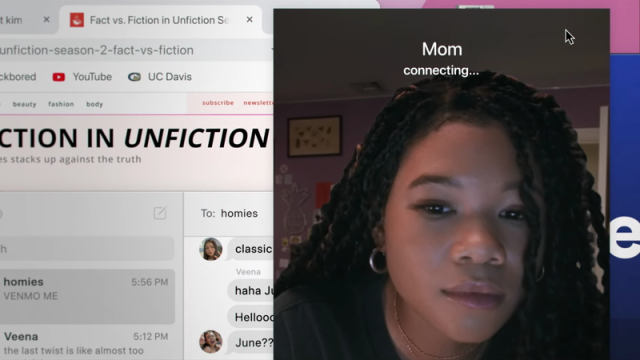 A film that taps into the terror anyone might feel if a thumbs-up emoji was the last thing they ever said to someone they love, the riveting-enough Missing stars the extremely likable Storm Reid (from A Wrinkle in Time and “Euphoria”) as June, a teenager whose relationship with her mother Grace (the also extremely likable Nia Long) has been on a snarky downturn ever since June’s father died of cancer some years earlier. Things have gotten especially tense since Grace recently started dating again, as seen via some excruciating awkwardness between June and her mom’s weird but nice-seeming boyfriend of three months Kevin (Ken Leung from ‘Lost’ fittingly enough). So when the adults decide to go on a romantic getaway to Colombia for a long weekend, June can barely be bothered to look up from her laptop as they leave. (That the weekend coincides with Father’s Day only seems to twist the knife, as far as June is concerned.) Cue that devastating thumbs-up emoji to end all thumbs-up emojis.

That laptop, alongside phone screens and security cameras and a world covered mountain high to valley low with surveillance devices, is the stage where our little drama here will play out. Missing, you see, is the standalone sequel to the 2018 hit thriller Searching, which starred John Cho as a father desperately trying to find his missing daughter using all the tech at his fingertips. Like that earlier film, Missing (which was directed by Nicholas D. Johnson and Will Merrick, who edited Searching) will keep us firmly entrenched inside the claustrophobic walls of those screens—the red-string wall of old-timey conspiracy theory has been shuffled aside by a cacophony of open apps and tabs; a little white wandering cursor in the place where a fingertip would have once traced frantically along seemingly disjointed connections.

Because after spending the weekend getting trashed with her friends—in a show-offy sequence that blends TikTok videos into a dissonant symphony of booze and barf—June goes to the airport to pick up her Mom and boyfriend but dun dun dun nobody shows. June waits and waits, she calls and texts—nothing, nada, zilch, every ding and ring dejected. Has mom had it with her pissy daughter? Or is something more nefarious at play?

June calls the hole-in-the-wall hotel that they were staying at but nobody speaks English — quick on her feet (or her fingers, I suppose) June babelfishes what the manager’s saying and realizes they’ve abandoned their luggage there. Time to get the useless (as ever) authorities involved, then!

As the clock ticks on disappearing security-camera footage from the other side of the globe, June finds herself ensnared in a web of bureaucratic nonsense, filling out forms and waiting for foreign embassies to come to her assistance. With the apocalyptic impatience of anyone who’s ever burned a hole in their Gmail account staring at it waiting for a reply, a lightbulb of inspiration pops for June—she needs feet on the ground and Columbia’s got its own TaskRabbit-type situation; voila, enter Javi (Joaquim de Almeida), a friendly middle-aged Colombian local man who can act as June’s ambassador of sneak. As the FBI flounders, June and Javi team up to unravel The Mystery of the Missing Mom together, while learning a little bit about family along the way (cue “awws” and some “oohs”).

If you were a fan of Searching then I don’t see any reason why you wouldn’t be a fan of Missing—- they’re both competently made thrillers starring under-appreciated actors (so good to see you, Nia Long!) with enough twists and turns to tie anybody following the clues into knots before the denouements begin untangling all of the entertainingly unlikely things way on the way far end of it. Like the first movie, we like these people enough that we’ll suspend our disbelief that they would stay glued to their laptops in a host of different mountingly-outrageous scenarios. And that there are moments that don’t add up, logic-wise. These films seem like good documents of our security state age, and solid sustenance for the Q Generation. This one in particular takes broad aim at our age of podcast slash Netflix-series amateur sleuthing — everybody’s got a theory! But there’s no fiction like non-fiction, especially when it’s all fiction.


Image sources (in order of posting): Sony,
Most Viewed