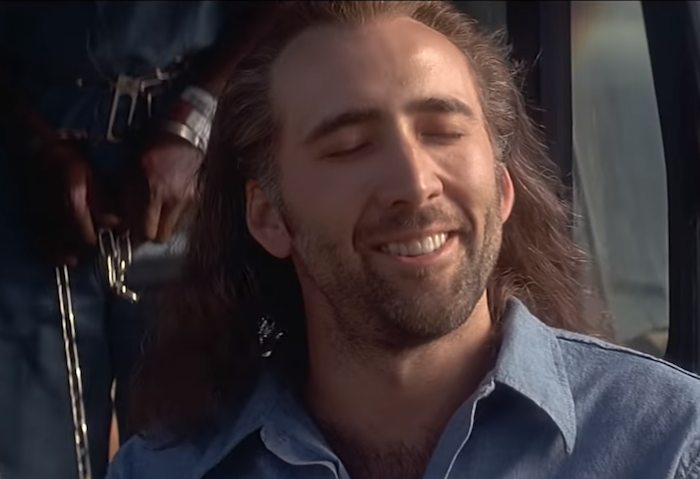 Scared of Coronavirus? Watch 'Con Air' Instead of 'Contagion'

No, we’re here today to discuss one simple thing how some of you are driving yourself bananas, and offer up a solution to the problem. Y’all need to stop watching Contagion and watch Con Air instead to deal with your fear of COVID 19.

I’ll tell you why.

See, on the surface it would make sense that you’d want to watch Contagion as it is a movie about the spread of a disease that wipes people out, and it doesn’t have talking monkeys in it, so you feel like this may be a life imitating art moment and thus want to scare yourself for entainment. Which is fine—but as a Con Airologist (a scholar who exclusively studies Con Air within an academic context) I’m here to tell you that Con Air is 1) a much better movie than Contagion, 2) has better explosions than Contagion, and 3) is actually about how humanity overcomes external threats, like pandemics, because this movie is multi-faceted. We’ll tackle all three of these assertions, below.

Con Air is Better Than Contagion

Con Air is better than Contagion because I said it’s better.

Contagion doesn’t have a scene where a plane crash lands on the Vegas strip. That is much more entertaining then watching Kate Winslet talk about how people touch their face a lot, because it has explosions.

I mean, if you watched the clip above, like I have, (a lot,) you’d know that Nic Cage is there to save the f*cking day. I’ll explain how this movie is a parable about how humanity overcomes external threats, and in this instance, a pandemic specifically.

Now, I was going to use the example that our bodies are the plane in Con Air, but that plane crashes and is destroyed at the end of the movie, so I need to find another way to thread this needle, here because alert is high on the subject at present.

OK, let’s just skip ahead to the pertinent part instead of having me write 500+ words of circular thinking so I hopefully confuse you, and muddy the point enough, that we get to where we need to be, anyway.

Nic Cage’s Cameron Poe is clearly our immune system, and he’s there to beat the cons (which can be short for convicts, OR contagions. See? I told you this movie had layers) into submission. However, since not everyone’s body is able to effectively fight off a plane full of convicts effectively, Poe is also there to stop the spread of contagion. You’ll note that at the end of the movie, all the convicts, who wanted to go do bad things out in the world, are neutralized, except for one. Unfortunately, that’s about the best we can hope for, with containment, as it’s never 100 percent effective, but Poe does a pretty good job all things considered. See, Con Air is about taking care of oneself, as well as society at large.

Isn’t that an uplifting message, instead of watching Gwyenth Paltrow die because women who cheat on their husbands in movies always get got because men are the ones who write, direct, and produce movies?!

Exactly. This, friends, is why you should watch Con Air instead of Contagion.

← Review: A One Person Q and A About Starbucks Iced Pineapple Matcha Drink | Angelina Jolie is Here to Remind You What You Should Know Already: Girls are People, Too →