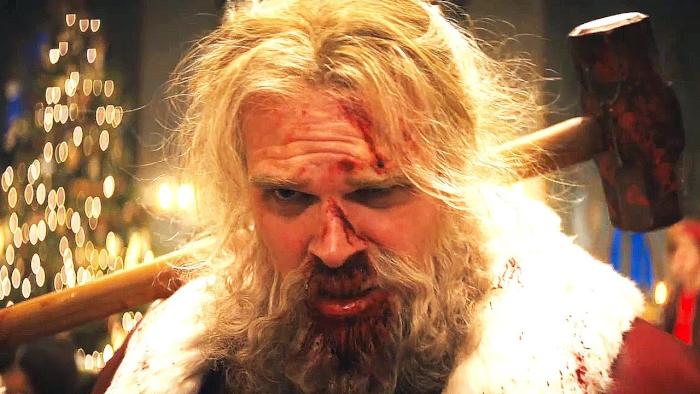 In Violent Night, David Harbour plays Santa Claus, a drunken lout disillusioned with the capitalism of the holiday and the greedy indifference of children looking for their next present before they finish opening the one in front of them. The film opens with Santa drinking his weight in booze in a local tavern on Christmas Eve and vowing that this will be his last Christmas before riding off with his reindeer and puking on the bartender below.

Elsewhere, Jason (Alex Hassell) and the wife from whom he is separated, Linda (Alexis Louder), attend a holiday gathering with Jason’s obscenely wealthy family, an event Linda only agrees to for the benefit of their kid, Trudy (Leah Brady). Jason and his sister, Alva (The Righteous Gemstones’s Edi Patterson), have been vying for the affections of their tyrannical mother Gertrude (Beverly D’Angelo) all their lives. Alva, in fact, named her child, with her airhead husband (Cam Gigandet), Bertrude to honor her mother.

All Trudy wants for Christmas, however, is for her parents to get back together. Meanwhile, Santa arrives, downs the expensive brandy, and passes out, only to wake up to find their mansion being robbed by a group of armed men led by “Scrooge” (John Leguizamo) seeking to steal millions from Gertrude’s safe.

That’s the setup, and like this review, it takes a little too long to get to the good stuff. Once everything is in place — once Trudy and Santa bond, once Scrooge moves all of his henchmen into place, and once one of the family members is hilariously sacrificed to the bad guys — Santa combines pop culture’s two best Johns, McClane and Wick, and crunches some bones, slices some necks, and smashes some skulls like the Viking warrior Santa once was before being imbued by mysterious Christmas magic. Violent Night is Rated R and it earns every bit of its rating, especially in its best sequence, a fantastically and squeamishly gory homage to Home Alone.

It’s pure B-movie schlock, complete with hilariously bad holiday puns, and a Santa enlivened by the power of belief. The perfectly cast Harbour plays it straight, which makes watching him decapitate multiple henchmen with an ice skate to Bryan Adams’ “Christmas Time” all the more fun to watch. There are even a few sweet moments to balance the sounds of kneecaps shattering and the splat of hammer to brain.

Violent Night is not great cinema, but it does exactly what it sets out to do: Entertain and delight holiday crowds who would rather flinch and whoop as Santa breaks bones than cheer big holiday musical numbers. It’s slow to wind up, but the last 45 minutes of Violent Night is pure bloody yuletide joy.


← T.J. Holmes Reportedly Had Sex With an Intern in His Office | An Even More Updated List of (Film Bro) Red Flag Movies →