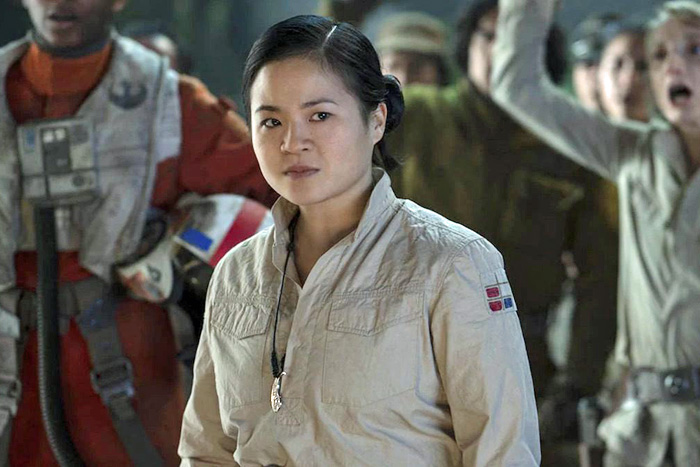 Two years past its release, The Last Jedi is still a contentious topic that’s only become more heated as The Rise of Skywalker seemingly went out of its way to reverse large swaths of Rian Johnson’s work. While some of those decisions can be somewhat justified when separated from the whole, it’s becoming increasingly hard to square the fact that Kelly Marie Tran’s Rose Tico was literally shoved behind a computer and given barely 90 seconds of screen time. It’s no secret that Tran was the target of aggressively violent and racist trolling that forced her off social media because the internet is an incel fartbox of dumb, but she also pushed back in a powerful essay for The New York Times and received a standing ovation at the 2019 Star Wars Celebration where J.J. Abrams specifically praised Tran’s casting.

so jj abrams just lied through his teeth to all of us and for what? what did he gain by sidelining rose? absolutely nothing #RoseTicoDeservedBetter pic.twitter.com/6bM9RWIPOE

To be fair, there is evidence that an attempt was made to showcase Rose Tico as a more prominent character, but it also makes the situation a whole lot worse because it sure as hell sounds like Tran learned at the last minute that her character got thrown under the Falcon. Via IndieWire:

Entertainment Weekly published a video interview with Tran on November 29, just a couple days before the cast first saw the final cut of “The Rise of Skywalker” on December 3 (Richard E. Grant revealed as much in his first reaction of the film), and in it Tran expresses excitement over where “Rise of Skywalker” takes her character. Tran says she was most happy for Rose to interact with Daisy Ridley’s series protagonist Rey.

“I think it’s really cool at all that they are even in scenes together because in ‘Jedi’ we weren’t in any scenes together,” Tran says. “It was really cool to have feminine energy on set. I wish I could tell you more but I’m really excited for people to see [Rose and Rey] interact. They both have the some objective which is to fight for the things you believe in and the people you love.”

Just so we’re not veering into Snyder Cut territory, here’s a promotional still from Rise of Skywalker, which features a scene that never once happens in the movie. Whoops.

I like to think that Rose and Rey are actually BFFs and that Rose always waited for Rey with a cup of water at the end of her training sessions and Rey is the only one on base smart enough to understand when Rose talks about engineering stuff and RELEASE THIS SCENE YOU COWARDS. pic.twitter.com/IHYcxs9rN8

As of this writing, #RoseTicoDeservedBetter is still going strong on Twitter to the point where it’s no longer a topic that the filmmakers can avoid. So here’s screenwriter Chris Terrio blaming Carrie Fisher for everything. Carrie Fisher who’s been dead for over two years. Yup. From Awards Daily:

AD: One thing that’s fairly pervasive right now is the buzz around Kelly Marie Tran’s reduced role in The Rise of Skywalker when compared to The Last Jedi. Tell me about working through her role in the final film.

CT: Well, first of all, J.J. and I adore Kelly Marie Tran. One of the reasons that Rose has a few less scenes than we would like her to have has to do with the difficulty of using Carrie’s footage in the way we wanted to. We wanted Rose to be the anchor at the rebel base who was with Leia. We thought we couldn’t leave Leia at the base without any of the principals who we love, so Leia and Rose were working together. As the process evolved, a few scenes we’d written with Rose and Leia turned out to not meet the standard of photorealism that we’d hoped for. Those scenes unfortunately fell out of the film. The last thing we were doing was deliberately trying to sideline Rose. We adore the character, and we adore Kelly - so much so that we anchored her with our favorite person in this galaxy, General Leia.

“We love Kelly so much that we stuffed her in the background where people will totally notice her as the most iconic Star Wars characters of all time spits in the face of God and nature by appearing in this film” is a HELL of a take. I mean, Jesus Christ. I know Terrio wrote Justice League so there’s clearly no bottom here, but goddamn, son.

Obviously, it goes without saying that Terrio and Abrams made a conscious decision not to give a f*ck about Rose, and it clearly shows. I’m not saying she needed to bust out a lightsaber and take out the Emperor Arya Stark style — Although, it’s not like this movie wasn’t handing out Force powers willy-nilly. — but there were steps along the way where Rose could’ve had a larger part. Instead, Abrams made other choices.

He gave her job on the Falcon to a slug. A SLUG

Let me say a little something about why I go so hard for The Last Jedi besides the fact that it’s just straight-up dope. Because I’m a nerdbomber and a half, I know when the new Star Wars merch is going to drop at Target and make it a point to ogle that shit out. I live a very full and rich life. In September of 2017, I took my kids to see the new display, and there was one character who instantly captured my daughter’s heart: Rose Tico. She didn’t know a thing about her, but Rose was her girl in that very moment. That Christmas, Santa brought figures of Rose, Paige, Tallie in her A-Wing, General Leia, and of course, Rey. It was a goddamn smorgasbord of Star Wars girl power that I’ve never seen in my decades of collecting hunks of plastic.

You’d think Lucasfilm would be proud of putting women at the forefront to the tune of over a billion dollars in a box office. It’s not like the movie failed, folks. Instead, the studio let Abrams and Terrio basically capitulate to the very worst of the internet, and I honestly don’t know if Baby Yoda can sip enough soup to make up for it. (But he should definitely still try! Let’s not go crazy.)

UPDATE: Welp, somebody got a nice phone call about maybe not throwing one of the greatest VFX studios in the industry under the bus.

In a statement to Vulture, Terrio clarified that Tran’s cut scenes had nothing to do with the work of The Rise of Skywalker’s visual-effects team. Rather, it was a narrative decision. “I badly misspoke if in an earlier statement I implied that any cut scenes between Rose and Leia were the fault of our VFX team and the wizards at ILM,” Terrio said. “In that earlier interview, I was referring to a specific scene in which Leia’s emotional state in Episode VII did not seem to match the scene we wrote for use in Episode IX, and so it was cut at the script stage before the VFX work was done. If we had chosen to use the scene, ILM would have made it look perfect. They always do. ILM performed actual miracles at every stage of the creative process in Episode IX. I remain in awe of their work.”

← New Year's Resolutions (For TV) With Podjiba! | Twitter Reacts To 'You' Season 2 →