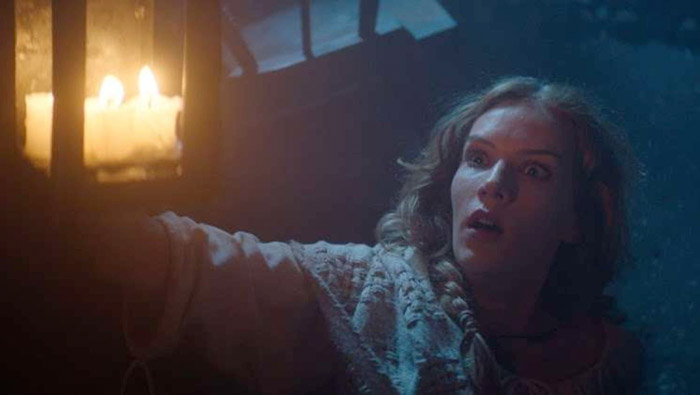 Now on Shudder: You're Not Ready For The Awfulness Of 'The Reckoning'

Neil Marshall built a reputation in horror helming gritty and harrowing offerings like Dog Soldier and The Descent. He awed fantasy fans with two of Game of Thrones’ most action-packed episodes, “The Watchers on the Wall” and “Blackwater.” Not all of his efforts have been hits. (cough Doomsday cough cough Hellboy reboot cough cough) Still, genre lovers were stoked to see what Marshall would bring with his witch-centered thriller The Reckoning. Then—just days before it was set to debut at Fantasia 2020—his leading lady/girlfriend Charlotte Kirk became the center of an extortion scandal that brought down two studio execs. It’d be a shame if a great film’s legacy was destroyed by an offset scandal. Good news then? Five months later, I can report The Reckoning is not a great film. It’s not a good one. Honestly, being tied to a tawdry Hollywood scandal might be the most exciting thing about it.

Written by Marshall, Kirk, and Edward Evers-Swindell, The Reckoning is set in plague-stricken England, 1665. Disease and paranoia ravage the people, sparking gruesome witch-hunts, where women are targeted for torture and execution. That’s not why angelic Grace Haverstock (Kirk) is being harrassed though. The pretty young widow dared to reject her lusty landlord, so he’s called her a witch. Haunted by visions of death and devils, poor Grace is pitched into a squalid cell, where she will await torture and more torture. That is most of the movie. For a small bit, Grace will plot an escape. But mostly The Reckoning seems a cheap excuse to watch a pretty lady suffer prettily. Oh, and she will.

Dark shadows and a pulsing color palette of teals and oranges give this 17th century setting the gloss of Michael Bay movie poster. Yet, everywhere there is vile muck: corpses in the streets, the infected spewing blood, the prisoners and peasants caked in filth, from toe to forehead. Except for Grace. Her face is clean with a flawless complexion, manicured eyebrows, bouncy bold eyelashes, a moisturized pink lip, and a “natural” look that’d be suitable for a magazine cover. No wonder they think she’s a witch, looking this good in a modern pandemic feels impossible. Looking this good while literally living in an iron and rot cage is DEFINITELY witchcraft. Even when she is burrowed into by a torture speculum, she has a dewy glow that could build her a skincare empire. (Yes, torture speculum.)

There are some lame jump scares along with action sequences that would make Buffy The Vampire Slayer cringe. But beyond that, The Reckoning is a shoddy excuse to allow Kirk to pose. When Grace’s husband dies tragically, Kirk’s lower lip gives a chic pout, as if she’s modeling for a perfume ad. Whether being tortured or flirted with, she seems like she graduated from the Zoolander School of Acting, with a major in Blue Steel. Then, there’s the sex scene.

Like, of course, there’s a sex scene in a plague-witch-movie that’s sort of kind of not really about sexism. Grace’s husband may be dead by the end of the first act, but this doesn’t stop Grace from remembering one gorgeously lit bang session. Over and over, the film flashes back to a nude Kirk rocking it cowgirl style, giving us skin shimmering by candlelight and a perky ass, of which she and Marshall are clearly quite proud. Good for them. Nice of them to share, I guess! I just wish there was anything more to commend this movie for! It’s almost funny that Grace gets a third-act glow-up that includes a new dress, and Connie Britton-level hair. Does that make any sense? No. But why should The Reckoning start now? The center of its revenge plot involves a sinister switcheroo that is patently absurd, yet the stone-cold seriousness of the movie’s tone suggests just go with it!

Now, you might read of the gore and nudity and preposterous plot and think, “Oooo this sounds so bad it’s good!” No. Stop it. No.

This is not Troll 2 or Winter’s Tale or Cats. This is not a big swing or a totally wild one that’s admirable and fun if only for the WTF of it all. It is a DEEPLY shallow movie made by two people who are clearly obsessed with Charlotte Kirk. Despite all its ridiculousness, the film’s cast takes it all very seriously, speaking in British accents that hail from Greater Hammyshire. Yet none of this is fun or thrilling or even interesting. It’s a model portfolio masquerading as a grim, boring movie.

Now on Shudder, The Reckoning was originally reviewed when it hit theaters, VOD, and digital on February 5.