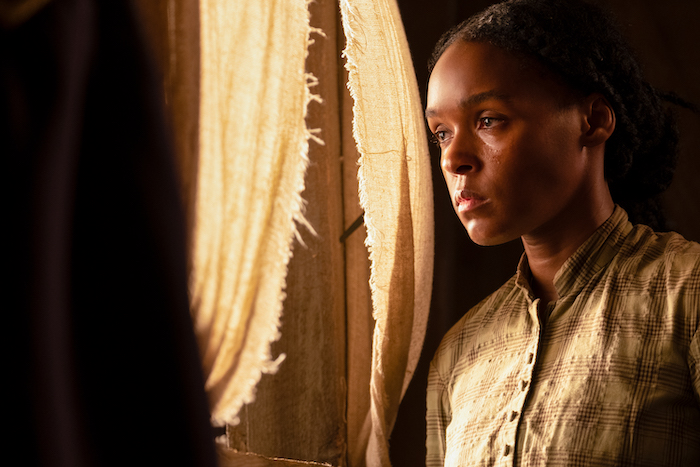 If you’re wondering what would happen if you crossed Craig Zobel’s The Hunt with that Confederate series D. B. Weiss and David Benioff wanted to make before HBO pulled the plug, the answer is definitely Antebellum, the feature debut of writer-director duo Gerard Bush and Christopher Renz.

The better question, though, is why anyone would want to unleash such a turd of a combo on the world in the first place. Having sat through Antebellum, I still have no idea who this film is supposed to be for, or why anyone could possibly think it was a good idea. It is a grossly miscalculated waste of talent, resources, and time.

This review will “spoil” the film because in this instance there is no way to properly discuss this garbage and why it stinks so bad without laying all the cards. I would also argue that you can’t really spoil what’s already rotten, but I know some folks hate spoilers even if the story in question is trash, so take this as your warning and turn around now if you don’t want to know how this one ends.

Now that disclaimers are out of the way, here’s the tea. The woman of the hour is Veronica (Janelle Monáe), a paragon of Black Excellence. Highly educated, she’s successful in both her career as a sociologist and in her personal life, happily married to doting husband Nick (Marque Richardson) and the proud mother of a precocious young daughter named Kennedi (London Boyce). One night, out of town to speak about her bestselling book at a conference, Veronica is kidnapped by a nefarious group of Confederacy-loving Civil War reenactors who take things to the next level by kidnapping and enslaving Black people in order to achieve a fully authentic Confederate experience.

However, Antebellum, in the name of shock value, tells this story out of order, first introducing Monáe as the enslaved “Eden,” wading her way through a parade of horrors in what is presumably the 19th century. Then Veronica awakes with a gasp in her beautiful present-day home, suggesting that Eden is an ancestor of Veronica’s and alluding to the extraordinary and growing canon of Black literature that explores intergenerational trauma, from Roots to The Vanishing Half.

Throughout its second act, Antebellum masquerades as such a tale, before making its big reveal: Eden is, in fact, Veronica, and the whole story takes place in the present. It’s not a story tapping into a rich legacy of Black storytelling, but instead the latest installment of the people-hunting conspiracy thriller trend that peaked early with the Brazilian weird western Bacurau and has since scraped the bottom of the barrel with The Hunt and now, shockingly, a torture-fest that feels even more poorly judged.

Technically, Antebellum is a beautiful film, full of gorgeously crisp cinematography, full of sweeping tracking shots, and skillful use of deep focus. But it’s an ugly, painful, infuriatingly pointless viewing experience. It’s like the film is trying to counter the bogus argument that racism was a problem solved in the 1960s by making the exact opposite but similarly foolish, argument—that the difference between the Black experience of the antebellum South and the present is mostly WiFi and airplanes.

Again: who is this movie supposed to be for? As a Black woman, there is no insight on display here; it’s just painful to watch. What is any Black woman viewer supposed to gain from the experience of watching the epitome of Black girl magic get kidnapped, tortured, raped, and dehumanized? But she escapes in the end, a devil’s advocate would argue, she kills her captors and rides off to freedom!

Sure, Veronica gets away—the lucky one, the one who makes it out while all the friends she made in captivity meet gruesome ends to emphasize the danger she’s in, because these filmmakers understand raising stakes but not bestowing characters with any depth or humanity—but she gets away beaten, literally branded like cattle. The film ends with her ride to freedom because even with the lack of insight on display here, the filmmakers likely realized that what comes after would hardly be triumphant, a survivor now left to deal with the aftermath of physical scars that will never go away, and psychological demons no amount of therapy could ever exorcise.

Twenty, thirty years ago, a film like Antebellum would be distinct enough in its confrontation of racism to feel like a statement of some kind, albeit a confused one, but in 2020 it’s beyond stale. The prestige slave film is a bad habit that needs to be broken. Remembering the past is important, and entertainment plays an important role in shaping public memory. But on this front, more isn’t inherently better. If anything, it’s worse. It’s painful, and it’s more painful for Black audiences who most easily identify with the bodies being brutalized on screen over and over and over again. There’s more to the Black experience and even the institution of racism than cotton fields and whipping posts, and Hollywood’s fascination with this specific facet of Black history only feels more warped and misguided by the day. Retelling this story more doesn’t somehow magnify impact. The people who go around wearing Confederate flag t-shirts aren’t going to watch movies like these, no matter how many are made. It’s preaching to the choir and the song is someone scratching a chalkboard on a loop.

Telling repetitive and graphic tales of the horrors of slavery does not, in fact, actively satisfy any real moral imperative. Filmmakers don’t get some sort of karmic gold star for dehumanizing characters twice over—first with slavery, second with a shoddy script—just because the horrors on display are inspired by historical truths. This is not to say there can’t or shouldn’t be films made depicting slavery. It’s to say that the films that are worth the pain actually have something to say. Antebellum does not. It just hurts.

← Will Smith On 'The Fresh Prince of Bel-Air' Reunion, Reboot, and AirBnB Rental | Kurt Russell And Goldie Hawn Team Up For 'The Christmas Chronicles 2' Teaser →