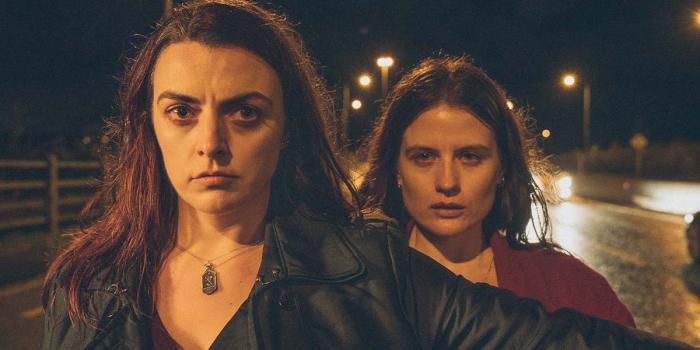 The ties that bind can support us when we feel on the point of breaking or they can be what snaps us. This tension plays at the heart of Wildfire, the feature directorial debut of writer/director Cathy Brady.

Set in a small town near the Northern Ireland border, Wildfire centers on a pair of sisters, Kelly (Nika McGuigan) and Lauren (Nora-Jane Noone). Just a year apart, they are “Irish Twins,” known all over town because of the infamous antics of their long-dead mother. The film begins with Kelly showing up out of the blue after having gone missing a year before. Her arrival is a shock to her sister, who is both relieved and immediately tense. Through Brady’s careful storytelling, we soon learn why.

The sisters begin as a study in opposites. Kelly is the wild child, who’ll run off without a word, skinny dip, pick a fight with a littering lug, and impulsively garden in the middle of the night. Lauren is the good girl, who grew up to marry, work a steady job, and be unflinchingly polite in the face of busy-body neighbors, who cluck in ghoulish concern over Kelly being just like their mum. She is the very picture of her, especially when Kelly runs around town in the bright red coat that was her mother’s signature.

As such, Kelly’s return forces Lauren to face their shared past, which includes happy memories of Christmas in July but also tragedy of which they dare not speak. As such, the sisters become a reflection of Northern Ireland’s struggle to reconcile its own traumatic history, specifically The Troubles, which greatly impacted this clan. Lauren is desperate to keep her eyes forward, never glancing back to the pain in the past. But with Kelly’s rose-colored view of their history, it’s tempting to follow her into memory-fueled splashes, dances, and dangerous leaps.

Folie à deux—or madness for two—becomes the unspoken fear about the pair’s behavior. Indeed, Brady tosses them into one of most notorious examples of this twin-associated condition. However, she shows great empathy for the sisters, presenting both as being in an untenable position. To idealize the past means not being able to thrive in the present. But to ignore the trauma of those times means living in a self-inflicted cage. Neither Kelly nor Lauren is happy, but they desperately yearn to be. So, they seek to rediscover joy in each other.

Their world is painted as a place civilized yet casually cruel, infringing on their bodies, minds, and innermost secrets. Brady’s script has a raw emotional core that Noone and McGuigan commit to utterly. McGuigan, in her final onscreen performance, offers a portrayal that is wild, wrathful, and mesmerizing. Her eyes blaze with childish enthusiasm in one moment, then searing heartache in the next. Noone’s performance is necessarily more restrained. Her nuance proves a perfect foil, as Lauren’s survival mechanism has been to push down the parts of herself that might earn scorn. She’s tense where Kelly is loose, guarded where she is vulnerable. Her coldness melts away as her sister’s verve reminds her—for better and worse—of their mother. Yet, a burden clearly sits on Lauren’s heavy shoulders.

Brady unfurls their story with a gentle hand, even around its most shocking pockets. While the pacing is unsteady, that seems well suited to the story about two women fumbling at reconciliation. The film is at its best when it’s Noone and McGuigan on their own, in a lake, in a yard, running down the streets, treating parked cars like a jungle gym. Their radiance is hypnotic, tempting us to follow them into what others might see as madness. However, the finale roughly rejects any romanticizing of their struggle, revealing a truth from which they can no longer run.

Ultimately, Wildfire offers an emotionally complex portrayal of sisterhood, trauma, and healing. The gnarled yet humane journey of Brady’s script is brought to life by the incredible charisma and powerful chemistry of its co-stars. Mental illness is not made a juicy plot device or a tawdry excuse for melodrama. Instead, Brady validates the struggle of her heroines by imbruing her film with an immersive moodiness, swells of anger, exhilaration, and sadness. All of which makes Wildfire an extraordinary experience, heady and heartfelt.

Wildfire made its World Premiere at the Toronto International Film Festival.

← Conan O'Brien Finds New Way to Torture Jordan Schlansky | Review: 'The Devil All the Time' is a Grimy, Compelling Thriller in Love With Its Own Bleakness →