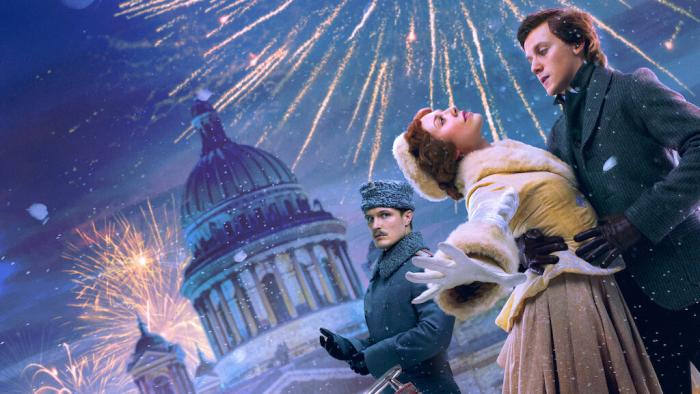 Now On Netflix: Want to see a Russian ‘Titanic’ on Ice? ‘Silver Skates’ Has Got You Covered

So, stop me if you’ve heard this one before. We’ve got a Russian romantic adventure historical drama inspired by Romeo and Juliet but mostly based on an American novel set in the Netherlands. There’s a petty thief with the fastest skates in Saint Petersburg, an aristocrat’s daughter who wants to pursue education despite her father’s wishes, some possibly magical skates, and a politically stirring defense of the forcible stripping of the bourgeoise’s wealth in favor of a more utilitarian society, all set at the dawn of the nation’s most notable political revolt. Are you interested?

18-year-old Matvey (Fedor Fedotov) is an ice-skating courier with a set of maybe magical skates. (Fedotov looks so much like Tom Holland in certain scenes that it’s unsettling.) Fired from his job and in desperate need of a way to take care of his ill father, he falls in with a group of pickpockets with Marxist ideals to redistribute the wealth from those they rob. Soon, he finds himself starcrossed with Alisa (Sonya Priss), the daughter of a tsarist minister. She dreams of going to university and finding freedom as a modern woman, but her father wants her to marry well. Her suitor, Captain Prince Arkadiy Trubetskoy (Kirill Zaytsev), is the perfect choice for political allyship, although he’s currently on a Javert-esque quest to stop the skating thieves once and for all.

This is Silver Skates, the first Russian film to be acquired by and released on Netflix as an original film. In its homeland, the directorial debut of Michael Lockshin was a financial success even with its pandemic-related release issues. According to its Wikipedia page, ‘There were no negative reviews at all.’ There’s no citation for this claim, funnily enough. Still, it’s not hard to see why Netflix would be drawn to this film. It’s a big-budget romantic historical drama at a time when such things are doing very well for the platform. It looks good. It’s easily consumed, and it’s trope-friendly in a way that will delight more than a few romance lovers. Titanic plus Shakespeare plus Disney plus Tony Hawk on ice.

It’s a high-concept blockbuster eager to hit a number of easily digestible beats to appeal to as wide an audience as possible. It’s interesting to see romance be given this kind of priority over blowing up buildings. This is certainly a deeply earnest movie, almost to the point of being po-faced. There’s grandeur and style and plenty of ice-skating show-offs to amuse even novices to the sport. It’s also about as emotionally deep as a teaspoon. The film is about two hours and 20 minutes long and feels it because you can predict every beat of this story about long before it happens. Silver Skates isn’t aiming for anything more complicated than Boy Meets Girl and all the violin swells that entails. It is; however, super weird in one way.

Politically, this movie is fascinating. The gang of thieves talks about taking down the proletariat who exploit their labor for their own means. The heroine is a STEM nerd who yearns for the freedom of the burgeoning women’s rights movements taking place across Europe. And all of this takes place on the eve of the 20th century, with the downfall of the Tsar and the beginnings of the Russian Revolution just around the corner. It’s a weird mix of Girlboss feminism and state-friendly propaganda, but don’t expect anything truly radical here. It’s still a Love Conquers All story.

Blockbuster cinema has only grown more international over the past couple of decades, which gives us a curious insight into its evolution. While the themes and intents may be specific to location, the aesthetic across the board remains stridently Hollywood. Consider some of China’s biggest hits like Wolf Warrior 2 and The Wandering Earth. They wouldn’t look out of place alongside Schwarzenegger or Star Trek if it weren’t for all the nationalism. (Not that American blockbusters are devoid of such things!) The Silver Skates is no exception.

While the story is a fairytale, the filmmaking is all Guy Ritchie. The frenetic editing and montages of crooks at work, with moments of slow-motion for stylistic emphasis, seem straight out of his Sherlock Holmes movies. Instead of sprints through the grimy streets of London, we get skating races and pirouettes across the pristine winter ice. Silver Skates isn’t as enamored with the underworld as Ritchie’s oeuvre. While we do get fun scenes of the working-class shindigs partying with vodka and candlelight, it’s clear that the movie’s focus is more concerned with the pure wealth porn of these gorgeous wintertime parties. A bit odd given that the entire point of the story is how crushing and unfair the class gap is, and how it’s all about to change very soon. But hey, it does look so very pretty. You definitely see every ruble on the screen.

I will be curious to see if Silver Skates can find its English-speaking audience. Hollywood doesn’t really make these kinds of sweeping, high-concept, big-budget romance movies anymore, and it’s not as though the audience for that disappeared. Hell, we can’t just have Bridgerton carrying that load for us. While it’s overlong, occasionally nonsensical, and has a tin ear for humor, there’s certainly enough in Silver Skates to entertain those for whom this sort of thing is their pop culture catnip.

I would; however, recommend just watching the original Russian version with subtitles, since the dubbing actors are a mixed bag and the lip-sync is hilariously off-rhythm in key moments.

Silver Skates is now on Netflix.

← Scarlett Johansson Was On 'Late Night With Conan O'Brien' As A Child | Remember 'Westworld'? →