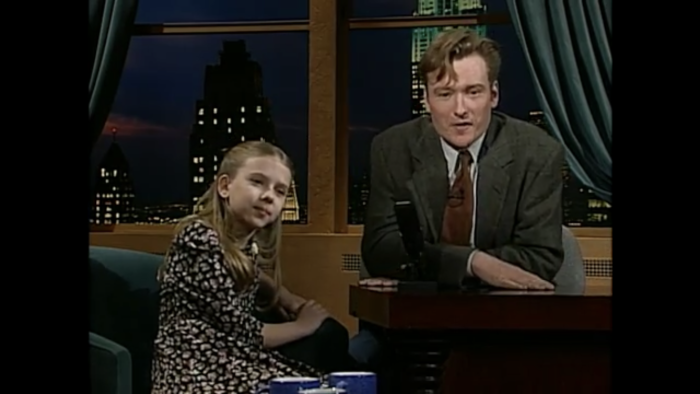 Kids say the darndest things (when Conan pays them to). As O’Brien revealed recently in an episode of his podcast, Conan O’Brien Needs A Friend, Scarlett Johansson was one of the children he once paid (I should probably come up with a different way to say that). The MCU actress played a spelling bee contestant who can’t spell in an episode of Conan’s old late show!

It’s fitting that this clip make the rounds now as Conan winds down to his last days as a late-night talk show host. It’s a great look back at how wild the early days of Conan were. The idea of the sketch is bringing out a child who is bad at spelling and then have Andy Richter call them out on it. The crowd doesn’t even seem to realize what’s happening at first. It’s fantastic.

It also helps that, even though she’s only about “11 or 12 years old,” according to Conan, Johansson is great in the sketch. She was such a charming kid! I knew she was working around then, being a Home Alone completest I definitely have seen her in the third installment.

Conan launched a lot of people’s careers over the years and, with no proof to back it up whatsoever, I’d like to add Scarlett Johansson to that list. That’s right, folks, were if not for Conan we wouldn’t even be getting a Black Widow movie this summer. Or, if we did, it would be starring someone else like Emily Blunt or Kirsten Dunst or Reba McEntire… OK, I’ll be honest, I would watch that movie.

← 'A Classic Horror Story' Ticks All the Boxes | Review: Want to see a Russian 'Titanic' on Ice? 'Silver Skates' Has Got You Covered →