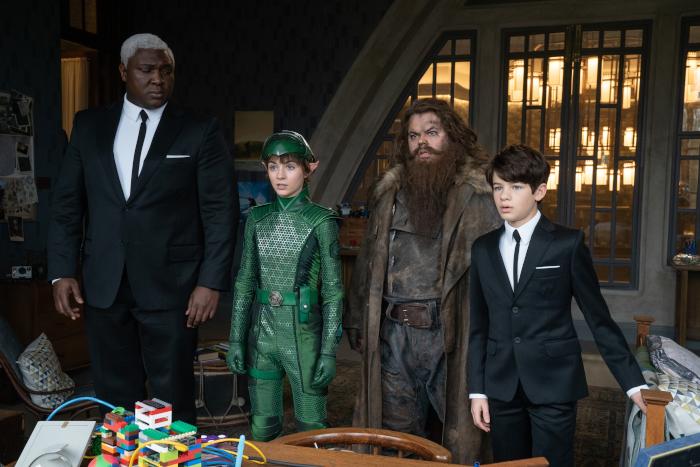 Review: Trying To Explain the Awfulness of ‘Artemis Fowl’ To My 12-Year-Old Self

29YO: Greetings from 2020. How’s the current acne and psoriasis situation going?

12YO: Not great, sadly. It itches a lot but the doctor says I’ll grow out of both of them.

29YO: Oh bless. I remember those lies. Anyway, I have news about your future. Some of it is even good. You have your dream job writing about films and pop culture for a living.

12YO: Really? That’s amazing! Have I written any books yet? Because that’s all I want to do with my life.

29YO: Uh… Well, you’re a busy woman. The world right now is… Let’s not get into that. What I wanted to tell you is that there is finally an Artemis Fowl movie. And you’re getting paid to talk about it!

12YO: Seriously?! That’s even cooler. Oh, I love those two books. Artemis is everything to me. So handsome.

29YO: Oh yeah, the whole sexy sociopathic villain crush thing began at an early age. Wait until you get older. There’s a well-dressed Danish cannibal I can’t wait for you to discover. But anyway, yes, there is a big-screen adaptation of Artemis Fowl and it was directed by Kenneth Branagh.

12YO: The Shakespeare guy? That’s an interesting choice. They must be taking this movie incredibly seriously.

29YO: Oh no no, Sir Ken sold out in a big way. He makes superhero movies now. And spy thrillers. And Agatha Christie movies where he cast himself as action Poirot with a mustache I swear is a sentient being. He’s on the Disney payroll now and they kind of own everything these days.

12YO: Well, that means they must really care about these books then, right?

29YO: You’d think so. They spent $125 million making this movie but they didn’t even put it in cinemas.

12YO: Oh my god, it went straight to video? Or DVD? Are those things still big?

29YO: It went directly to this thing called Disney+, which is a service you pay for that allows you to watch basically every Disney movie from home. And Star Wars. There are a bunch more of those now, and some of them are good. Also, those Marvel comics you sometimes see in the library? Yeah, stock up on those because they’ll become inescapable. So you watched Artemis Fowl from home while sitting on a recliner chair that Granny Cath gave you.

29YO: Yeah, but dad wishes it was bigger. Not that a bigger TV would have made Artemis Fowl any better. Sorry to break it to you but it’s sort of awful.

29YO: Right, let’s start with the big obvious problem here. If you were to tell me that everyone involved with this movie, from the director to the screenwriter to the cast to the bloody caterers, hadn’t bothered to read Eoin Colfer’s book, I would completely believe you. Artemis Fowl had a famously great pitch — Die Hard with fairies! The great hook of that first novel, the one that was such a big deal upon release, was that it let readers root for a clear villain. Artemis is a scheming teen genius who gets everything he wants and you still can’t help but be won over by him. When you’ve spent your childhood reading stories with clear divisions between good and evil, it feels pretty radical to be Team Villain. Sadly, the movie completely chickens out on this, so not only do we get a much more sympathetic Artemis, we get one with daddy issues.

12YO: In fairness, he kind of has daddy issues in the book.

29YO: Yeah, but said dad isn’t in endless bloody flashbacks, nor is he the catalyst for Artemis’s not-all-that-evil plans. It’s such a depressing Hollywoodization of a much more interesting narrative. Artemis can’t be evil for the sake of it. He has to be doing it for a greater good, and we’ve seen countless stories do that well-worn arc in far more interesting ways. It dilutes not only Artemis’s character but the very thing that made Colfer’s work so appealing in the first place. Why bother spending all that money on a wildly successful series of novels if you don’t get why the novels were popular in the first place?

12YO: That does sound disappointing. How is the worldbuilding? I’ve spent a lot of time wondering what the LEPrecon headquarters look like. It’s such a strange but gripping mixture of modern technology, Irish fairy folklore, and ’80s action movies.

29YO: See, that should have made this movie RIPE for imaginative production design but everything here looks so derivative and flat. The Fowl manner is pretty cool but everything else seems to look like it was copy-pasted from about a dozen other movies. There’s a lot of Harry Potter here, because apparently every major studio hears ‘young adult fantasy’ and thinks that means one thing. Some moments land with such a thud that I’m stunned they ever got out of pre-production, such as the extremely suspect choice to have the criminal goblins wear hoodies and gold chains.

12YO: Yikes. That seems kind of racist.

29YO: Oh, it is! It’s very Bright. Now there’s a movie you can sit out once it drops on Netflix. I’ll explain that later. Anyway, Haris Zambarloukos’s cinematography is oddly inert and the sheer glut of CGI would be more impressive if it didn’t all feel so untethered from the supposed heart of this story. Actually, that’s a lie because a lot of the special effects here look staggeringly cheap. Nikesh Patel plays Foaly the centaur tech advisor to LEPrecon and his horse legs would have looked more convincing if they’d just stuck another guy in a Halloween costume behind him to trot along out of sync with the rest of his body. Even the natural glory of Ireland, the movie’s setting, feels like a discount version of the real thing. Given how much the movie waxes lyrical about the mystical beauty and historical landscapes of the country, it doesn’t seem particularly interested in developing it beyond some second-unit shots of the coastline and some seriously ropey accent work from about 60% of the cast.

12YO: So they didn’t even cast an Irish kid as Artemis?

29YO: Oh no, they got that part right. Ferdia Shaw, who’s a newcomer making his cinematic debut here, is fine but he totally lacks the charisma of Artemis. I don’t blame him for that since he’s been given the least interesting version of the character to bring some life to. The script seems to think that whininess is a suitable substitute for malicious charm. Lara McDonnell is actually a pretty fun Holly Short but the movie doesn’t do her justice.

The major problem with the cast is with the bigger names. Josh Gad, who is a depressingly big deal in my current time, is given far too much screen-time as Mulch Diggums. Not only does he act as narrator to the story — the script has major issues trying to condense a story that is simultaneously overstuffed and weirdly familiar — but he’s committed to this goofy sidekick shtick that makes every scene he’s in just so much more exhausting than it needs to be. He’s not funny, he’s doing about four different accents at once, and he’s saddled with all the painful modern-day references, because apparently we can’t make a kids’ movie these days without stuffing it full of jokes about pop music to make exhausted adults perk up for three seconds. The film seems more interested in him being the protagonist than Artemis freaking Fowl!

12YO: Wait, that Judi Dench? The beloved Dame? How can she be Root when the whole point of Holly’s arc when she’s the first and only female captain in LEPrecon? She’s supposed to be struggling with the sexism of the organization and consistently being underestimated by her colleagues.

29YO: Apparently, that would have been too interesting an addition to this blob of bland. Dench is at least having fun in the role. She commits to the gruffest of Irish brogues and at least brings a touch of camp energy to the film, something it desperately needed more of. I did laugh incredibly hard when she, with the straightest face ever committed to the craft of acting, said ‘Top of the morning to you.’

29YO: Don’t worry. You’ve already seen Dench covered in fur scissoring the air in glee after hearing Ian McKellen sing about dealing with palsy, so this is nowhere near the weirdest thing you’ve seen a beloved legend of the stage and screen do in the past twelve months.

29YO: And another thing! This film feels staggeringly incomplete, as if chunks of the script were left on the cutting-room floor. I get that they were hoping this would kick off a big franchise for Disney — ha! — but that’s no excuse for how sloppy the pacing is. By the time the narrative arrives at its supposed climax, it only feels like the first act has come to a conclusion. It’s all weirdly anticlimactic, a matter not at all helped by their decision to make the supposed villain of this story an unseen, growly-faced non-threat whose generic ‘wipe out all mankind’ motivation is about as convincing as… well, literally anything else in this movie. You wouldn’t know it by the way that the movie treats her but said villain is actually Opal Koboi from the second book, as played by the wonderful Hong Chau in an uncredited performance. Frankly, she should sue Branagh for how shoddily she’s treated here. What a waste of a great character and actress.

12YO: So, if Opal is in the movie, does that mean the story is trying to take on more than one of the books?

29YO: Kind of but that would have required, you know, effort and some genuine love of the source material, something the film lacks in droves. This attempt to condense hundreds of pages of lore, characterization, and charisma is such a failure that it’s no wonder Disney didn’t even bother to give this film a theatrical release, pandemic or no pandemic?

29YO: Anyway, I’m sorry to break the news to me, but Artemis Fowl is a disappointing slog of a movie, a dead-on-arrival adaptation that squanders the unique and appealing qualities of its beloved source material. I’d already lowered my expectations for this film once I saw the trailer and I was ready to accept some major changes to the books because that’s how adaptations often work, but boy, even I was let down by what a stinker this was. Sorry to break the news to you like this but I wanted to prepare you for this future pain, 18 years down the line.

12YO: I appreciate that. I guess. So, what does the future hold for all my other pre-teen favorites? Do I get a Darren Shan movie?

29YO: Yeah, but once again, temper your expectations. *loud whisper* They made it American.

12YO: Ugh, of course. Does the Harry Potter series at least end well?

29YO: Ooft, now THERE’S a whole can of beans I can’t open right now. I have to go now. Enjoy the rest of your agonizingly awkward adolescence, and stop picking at your face!

Artemis Fowl is now available to watch on Disney+.

← Why Are People Fighting Over Christopher Columbus Statues? | A Cover You Didn't Know You Needed: Radiohead's 'Creep' Re-Imagined As a Medieval Ballad →