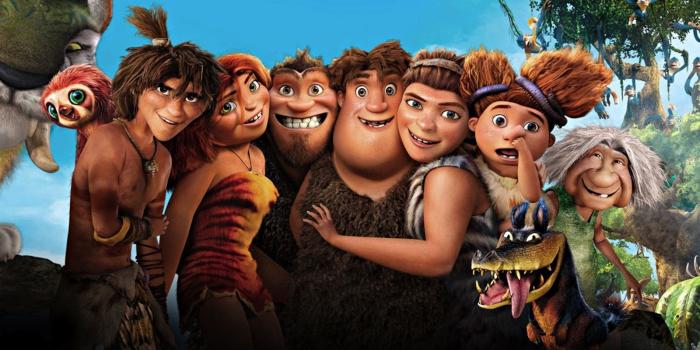 In Theaters: 'The Croods: A New Age' Is a Yabba-Dabba-Doo Time

There were a number of delays (and even a cancelation in 2016) and changes behind the scenes to the sequel to the successful 2013 film, The Croods, but seven years later, and the film is finally here. It couldn’t come sooner for children starved for new family entertainment in a marketplace that’s seen very few major releases since March outside of Mulan and Trolls: World Tour. Honestly, it’s remarkable how lenient we in my family have become about what is suitable for eight-year-olds. Before the pandemic — when there were new options every other week — we were good about abiding by Common Sense Media’s age recommendations. Within weeks, however, we’d seen all of the MCU’s PG-13 films and a few others that we probably would have held back a little longer during normal times. Another year, and we may be watching David Fincher films with nine-year-olds.

These are not normal times, however, which makes the arrival of The Croods: A New Age so very welcome. The original The Croods is much better than most realize — an amusing, surprisingly heartfelt ode to family featuring tremendously good voicework from Nic Cage, Emma Stone, Ryan Reynolds, and Catherine Keener. The sequel doesn’t match the original in terms of heart warmth, but it’s still a pleasant and often very funny diversion the kids will enjoy and that won’t feel like agony for the adults.

In the original The Croods, the family of cave people — Grug (Cage), Ugga (Keener), Eep (Stone), Thunk (Clark Duke), and the grandmother (Cloris Leachman) — went on a road-trip journey after their cave was destroyed. They met Guy (Ryan Reynolds), who fell in love with the Croods’ daughter, Eep. There was a lot of Eight Simple Rules overprotective father humor (RIP John Ritter), but it was a fun little adventure that juxtaposed the pros and cons of living single and living in a pack.

In the sequel, the stone-age family (and Guy) stumble upon a paradise lived in by the Bettermans, Phil (Peter Dinklage), Hope (Leslie Mann), and Dawn (Kelly Marie Tran). The Bettermans had raised Guy after he tragically lost his parents (glimpsed at in a flashback to open the movie), and they see Guy’s return as an opportunity for the daughter, Dawn, to find love. Guy, however, is already spoken for. He and Eep are smitten with each other and looking to move away from the pack and into a home of their own, much to the dismay of Grug. The Bettermans, who represent a more suburban way of life in contrast to the wildness of the Croods, scheme to chase the Croods away while hanging onto Guy. Meanwhile, there’s a mysterious threat outside the walls of the Bettermans’ paradise home with which both families will eventually have to deal.

A New Age traffics in conventional themes — the importance of family, not judging those who are different from you — while offering lush animation and genuinely great voice work. My son — who loved the original when he was four — was equally enamored with the sequel as a teenager, which he also tells me incorporates a number of the animals from The Croods game (spider wolves, punch monkeys, Sabertooth rabbits, etc.). Meanwhile, the eight-year-olds liked it enough to seek out the original, so the whole range of age groups can vouch for the quality of A New Age. It’s not the kind of film that adults would watch without kids — like much of Pixar’s output — but it is absolutely worthy of family viewing.

The film — from director Joel Crawford, taking over from Kirk DeMicco, Chris Sanders who left the project after its initial cancellation — opens in theaters this Thanksgiving weekend. While I wouldn’t encourage anyone to see it in theaters, it will be available for home viewing on Christmas, when it will make an excellent time-killer during the holidays.