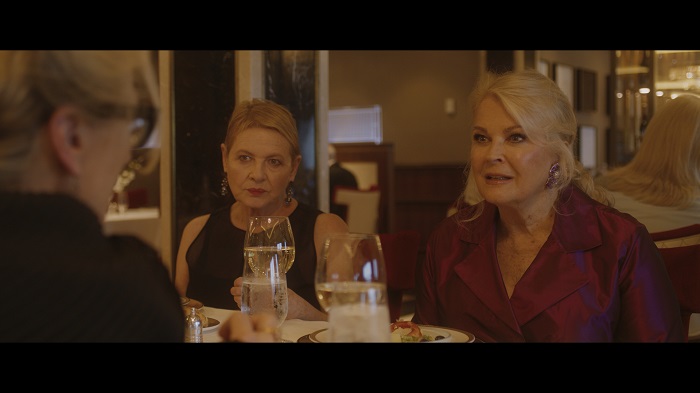 I know that comparing movies with each other isn’t a perfect analytical method, but sometimes when the shoe fits, you gotta slide it on and have a dance. So here goes: Steven Soderbergh’s Let Them All Talk is essentially his version of Pedro Almodóvar’s Pain and Glory, and by that I mean, both films are about men looking back on their lives as artists, considering their art and what it has taken from them, and wondering about what the future might hold. Movies about the creative process are not new, of course—hell, David Fincher’s Mank just came out!—but there is something both lovely and low-key about Soderbergh’s rumination, much like Almodóvar’s was. Nothing about these movies is similar aside from the yearning that unites them both in trying to figure out why we create art and what we sacrifice to it, but I would say a double feature would be a solid idea. Treat yourself!

Let Them All Talk feels like a scaling down for Soderbergh, more akin to the tight focus of High Flying Bird than the grandiose scale of Ocean’s 11. There’s still a great ensemble cast here—no Soderbergh film can exist without one of those!—but don’t expect a Vincent Cassel breakdancing cameo; Let Them All Talk is not interested in flashy asides. It is, as most Soderbergh films are, interested in the work—but this time, not just about singular achievement. Not just about the triumph of outsmarting both NBA team owners and your crappy boss at your sports agency firm. Not just about making Andy Garcia and Al Pacino look foolish when you rip off their hotels. Not just about putting a casually evil mega-corporation in its place after they’ve been responsible for poisoning an entire town. Not just about two hot brothers whose code word is “cauliflower” and another hot guy named Joe Bang stealing trash bags full of money from a huge NASCAR event. No! That’s not enough.

What Let Them All Talk considers is how our work spreads past our own limited sphere of understanding, and how it is consumed, judged, appreciated, or misunderstood by others. This is less about creativity and more about criticism, and the way one cannot exist without the other. What are the arbitrary distinctions we build up around art? What is high-brow? What is low-brow? What is literature? Can literature be a mass-market paperback? A spy novel? A thriller? Is genre inherently bad? Is a text supposed to challenge us, or satisfy us? Are those always different things? Let Them All Talk doesn’t argue these things to death; this isn’t a grad-school seminar. But it is delightfully talky, rich with detail, and incredibly thoughtful in the way it sketches in the lives of three women who have been friends, sort of, for the majority of their lives. Emphasis on the sort of.

Set in fall 2019, Let Them All Talk focuses on award-winning, but not necessarily famous, author Alice (Meryl Streep, reuniting with Soderbergh after The Laundromat), who is convinced by her new agent Karen (Gemma Chan) to travel by boat to the UK to receive a distinguished award named after one of Alice’s favorite writers, Blodwyn Pugh. Alice has a Pulitzer, and Alice’s books have been adapted into films and miniseries, but Alice is not recognizable. She is not a celebrity, but she is rich, and her books sell, and so when she asks Karen if she can bring some guests upon the Queen Mary 2 for the voyage, Karen readily says yes. 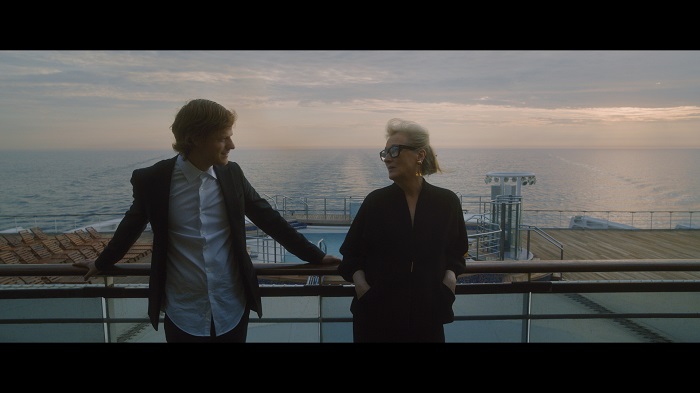 So Alice invites two friends she hasn’t seen in 30 years, but whom she calls her closest confidantes; they all went to college together, and knew each other before Alice became Alice. Along for the ride are widowed Susan (Dianne Wiest), who works with female domestic abuse victims who are serving time for fighting back against their tormenters, and divorced Roberta (Candice Bergen), who loathes her job at a lingerie shop, pandering to women who berate her about the differences between the shades teal and peacock blue. Susan and Roberta have their own beef with Alice, but a free trip to Europe is a free trip to Europe. Joining the three women is Alice’s nephew Tyler (Lucas Hedges), whose fellow college students have no idea who his aunt is and don’t understand his awkward attempts to explain what he thinks he can learn from three women decades older than he is. And sneaking onto the boat in secret is Karen, who thinks she can use the trip to her advantage and convince Alice to write a sequel to her Pulitzer Prize-winning book You Always, You Never, which Alice now loathes, far preferring her less-successful work The Function of the Body. (Karen thinks the confined setting of the Queen Mary 2 will give her a higher chance of success when facing off against Alice because of, you know, the implication.) 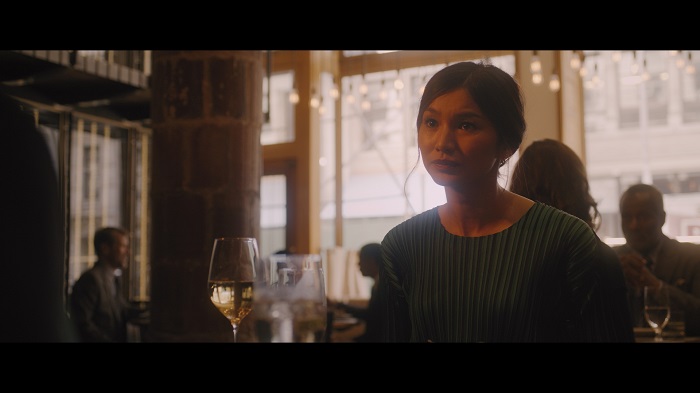 (… I guess I should make clear here that I am joking, Gemma Chan does not go full Dennis Reynolds. Moving on!)

From the beginning of the trip, it’s clear that Susan and Roberta are on one page, and Alice is on another. Alice is always busy writing, dictating very firmly that she only has time to see the friends whom she barely knows anymore at dinner. Meanwhile, Tyler develops a crush on Karen, but is caught between her and Alice when the former asks him to spy on what Alice could be writing. As Alice struggles to write and Karen and Tyler get to know each other, Susan and Roberta are left to reconnect—shooting the shit, catching up, and gossiping about Alice, which is really where Wiest and Bergen come alive. They are, frankly, delicious together, Soderbergh framing their board-game playing meetups from high up, like we’re peeking in on a clandestine meeting of two spies unloading an array of secrets. Wiest has been a maternal (The Lost Boys, The Birdcage) and authoritative (hello, Law and Order!) figure for so long that it’s delightful to see her let loose, casually dropping details about her collegiate sex life and speaking with passion and knowledge about the ways the women she works with defended themselves against their abusers. Bergen’s Roberta, meanwhile, is nursing a long-held grudge against Alice, and she is exceptional in communicating brusque disinterest. Her constant brushing off of Alice (rejecting after-dinner drinks, flaking on afternoon tea) is always petty, but Bergen convinces you of Roberta’s surety.

What came between the women was Alice’s work, partly, but also just the reality of life. You graduate college. You start a job. You get married. You have kids. You move. Your kids need help. You give it to them. Your marriage is maybe unhappy. You work on it. Maybe it doesn’t work out. Maybe you get divorced. Maybe you have to struggle to restart your life. And maybe the one friend you had from college, the one who used to be your closest friend, doesn’t reach out. Maybe you drifted apart, and you keep drifting apart, and that’s what the years and the distance do. You aren’t who you were back then. And that person isn’t who they were back then, either. Maybe you can never get back to that place. Maybe what has replaced those identities is the work you produced over this time, and maybe what matters more in the future is the work still left you in to produce. Is that bleak, or is that hopeful? Let Them All Talk asks all these uncomfortable questions about life, purpose, and art in such a breezy way, with the gorgeous, dim-lit dining rooms of the Queen Mary 2 and with Thomas Newman’s pleasantly jazzy score, that you don’t realize how existential this movie is really getting. Don’t let that scare you away! Let Them All Talk is operating on a particularly thoughtful wavelength with deeply satisfying performances from Wiest and Bergen both, and yes, allow me to reassure you: It’s approximately a thousand percent better than The Laundromat. No Meryl in brownface this time! Success!

Let Them All Talk is available for streaming on HBO Max starting on Dec. 10, 2020.

← Transition Updates: And You Thought You Hated Giuliani Before | Your Next Binge Should Be 'Zoey's Extraordinary Playlist', a Thoughtful Musical Dramedy →