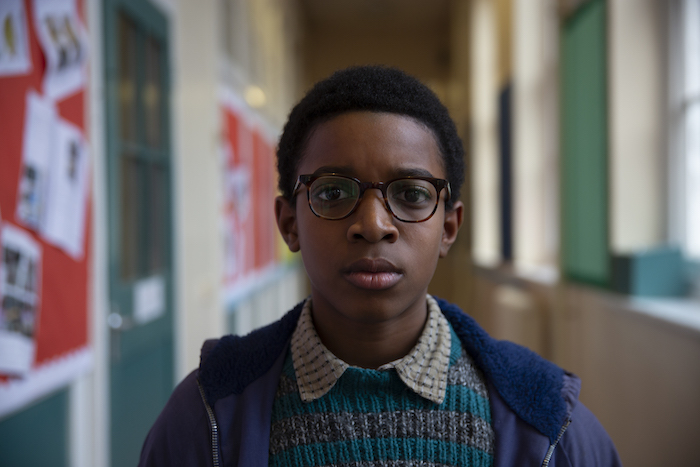 Education, the fifth and final installment of Small Axe, proves a fitting farewell to filmmaker Steve McQueen’s groundbreaking project, embodying the strengths of the other four films that came before it while still bringing something new to the table. Like the other entries, it centers and celebrates Black British—and specifically British West Indian—identity without ignoring or minimizing the incredible burden of systemic oppression or the uphill, still ongoing battle to change things. What Mangrove is to the legal system and Red, White and Blue is to law enforcement, Education is, as the title suggests, to the educational system, and the ways in which a force that is supposed to serve people works actively against the Black community in ways large and small.

Young newcomer Kenyah Sandy gives a remarkable performance as Kingsley, a 12-year-old-boy who loves space and soccer. “Can I please be an astronaut like Neil Armstrong, and also play for Tottenham?” he requests of God in his nightly prayers, but he still struggles with reading. Combined with incidents of classroom rowdiness, Kingsley’s teachers have lost all patience with him well before a low score on an IQ test gives the principal the final piece of ammunition needed to condemn Kingsley to an “educationally sub-normal school.”

While the repugnantly smug headmaster insists it’s a place where Kingsley will get the specialized attention he needs, the truth is exactly the opposite. It’s less a school and more a holding pen for all the children the system has already written off and deemed unworthy of any effort. Negligent teachers play truant more than students, and can’t be bothered to even pretend to come up with even a flimsy excuse of a lesson plan. One teacher, in particular, takes advantage of having a captive audience to perform an awful rendition of “House of the Rising Sun” in a scene that could be described as School of Rock’s evil cousin. McQueen puts viewers firmly in these students’ utterly bored shoes by making you experience the whole regrettable ride in real-time from the first to the last chord, because that’s the kind of filmmaker he is.

McQueen’s eye for subtlety shines in his depiction of Kingsley’s home life, painting a clear portrait of how his academic struggles have reached their dire status without his family really noticing what was happening. His mother Agnes (Sharlene Whyte) is a firm believer in the power and fundamental importance of education. Yet she lacks the bandwidth between her multiple jobs and primary caretaker role to notice how the school system is failing her son until an activist seeks her out to alert her. As soon as Agnes learns more about what’s going on, she becomes Kingsley’s most outspoken champion.

Like other Small Axe films, while set in 1970, Education’s subject matter and commentary feels incredibly relevant to today but thankfully avoids the all-too-common pitfall of trying too hard to make connections between the past and the present. It lets the historical drama unfold and gives viewers the space to draw connects to the present, instead of trying to make them too self-evident. Script-wise, the screenplay co-authored by McQueen and Alastair Siddons (also co-writer on Mangrove and Alex Wheatle) features a few dialogue exchanges that hit some points more on the nose than feels fully necessary, but on the whole shows compelling restraint.

The films of Small Axe are made brilliant through impeccable execution. All five tell simple stories, and simple stories are often the hardest to pull off, because if one element underperforms the whole thing sinks. A simple, realistic drama is the souffle of movies—not too many ingredients and spectacular if pulled off well, but incredibly fussy. It’s all the little details that make Education brilliant, the way it takes no element for granted. It’s in the elegance of cutting from Kingsley watching a documentary about outer space in a science museum IMAX dome to Agnes in the kitchen with the radio on for background noise as the host announces the day’s horoscopes.

Details like how, when an activist tells Agnes that she will have to write to the Secretary of State for Education to petition Kingsley’s placement into a school for the educationally subnormal, she emphasizes with an undertone of hope that said politician happens to be a woman. In a moment that straddles the border between tragic irony and pitch-dark humor, that woman is none other than Margaret Thatcher. “She’s only just been appointed so maybe we have a chance.” Deciding not to end on a sour note, Education leaves that letter exchange unshown, though one can imagine how well that goes.

Still, while the war is far from won, the film ends on a quietly hopeful note, as Kingsley’s family comes to recognize his struggle and fight in his corner, and, with the help of a community of activists, find resources to supplement the education that the state is failing to provide him. Seeing how his actual abilities start to shine in the presence of supportive, instead of dismissive, educators, Education gives small moments the gravity of a major victory, enabling an ending that feels cautiously optimistic without feeling false or minimizing the obstacles Kingsley still faces.

All five films of Small Axe are now available on Amazon Prime.

← The Best and Worst Books of Cannonball Read 12 | 'Coming 2 America' Trailer Brings Back All Your Old Favorites (And Some New Ones!) →