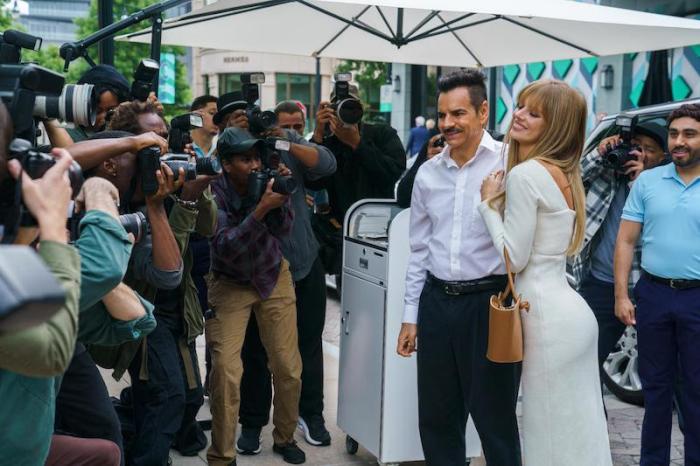 Review: Samara Weaving and Eugenio Derbez Give Us A Surprise Sweet Little Winner With 'The Valet'

About five minutes into The Valet, streaming now on Hulu, I realized with a happy exhale that The Valet was maybe going to be a better, more interesting, and more human movie than I thought it was going to be going in. Because from the outside of the film, which is a remake of the 2006 French farce La Doublure, it threatens to stupefy with a sappy Gilligan’s-Island-broad bluntness—see the gorgeous movie star (Samara Weaving, kick-ass queen of Ready or Not and Nine Perfect Strangers) and the mousy parking valet (Eugenio Derbez from the Best Picture winner CODA but more importantly the Dora the Explorer movie) with the funny mustache meet cute and shenanigan their way toward romance! Flashbulbs and rom-com fairy tales, oh my!

And yet Richard Wong’s film immediately makes space to let some blessed fresh air seep into its overblown premise. As we watch said valet Antonio ride his bike around his un-gentrified Los Angeles neighborhood and smile at the small things a little whiff of fineness starts to seep in; a sense of place (even though it was filmed in Atlanta of all places!) and charm that a less confident movie wouldn’t have had the time or eyes and ears for. Yes at over two hours the movie is too long, and it’s definitely over-stuffed with characters. And yet all of this only ends up giving it more grounding. It takes its time to walk slow, smell its silly roses, and in so doing surprise of surprises strides a little closer to classic Notting Hill territory than it does the forgettable Overboard remake, which was the last movie to unite writers Bob Fisher and Rob Greenberg with their leading charmer Derbez.

Don’t get me wrong—The Valet is still wildly broad stuff. The cast of colorful characters includes a horny elderly mother (beloved Mexican actress and politician Carmen Salinas, who passed away in 2021), several wacky sidekick valet friends, some cute canoodling kids putting on a Shakespeare play, a pair of rival private detectives, and of course an evil real estate developer billionaire sex fiend (Max Greenfield) … and isn’t it weird how I’ve reviewed about a dozen movies over the past couple of years that have brought back this stock 1980s villain, asked no one anywhere who’s been paying attention to the world.

And The Valet definitely has its moments where it inches toward dreaded Poverty Porn—moments where it sees its poor characters as instantly wise and decent because of their lesser lots in life, all there to teach the Rich But Lonely lessons about How To Live Better. There’s one scene in particular where I worried I might have stumbled into the below-decks of James Cameron’s Titanic and checked to make sure that Frances Fisher wasn’t sneaking up behind me with a corset in hand. And yet the movie uses its long runtime to flesh out just enough of these folks, just enough that they’re slightly less than the stereotypes we’ve seen in other films, and in so doing thankfully skates by such concerns. Perhaps on the thinnest of ice, but nevertheless they do, they make it out alive. Phew!

The Valet also, most importantly, has an award-winning duo in its leading man and lady. I’ll hesitantly admit here that I hated Derbez’s cloying performance in CODA so much that merely the sight of him here at first gave me great pause. But he threads the schmaltz needle here much better than he did in that, creating a super-likable hapless goof who’s found himself thrust into a situation far beyond his meager hands or head can handle. Caught in the background of a paparazzi snap of a lover’s quarrel between that movie star Olivia (Weaving) and her married billionaire bastard beau Vincent (Greenfield), the primped two-some drag Antonio into their scheme to fool the press, making him pretend to actually be the secret partner that Olivia was fighting with. I mean everybody loves romance, right?

The press of course eats the unlikely rags-to-riches Prince-and-Pauper story right up—hey remember when Elizabeth Taylor married a construction worker?—and so do the many, many, many people in Antonio’s circle of family and friends, glad to see a local boy make good. It doesn’t hurt that Olivia, though self-obsessed and occasionally diva-tinged, is it turns out actually talented and friendly and at heart better than the mess she’s created. While she inches towards some bad antics the script thankfully never makes the character into the shrewish Rich Bitch nightmare of the Overboard films, the types that need to be torn down a dozen pegs because, you know, misogyny.

No the film’s smart and kind enough to see that what Olivia is is just lonely, and Weaving is such a big-eyed charmer herself that she manages to nail both the character’s sitcommy stylings of larger-than-life with The Girl, standing in front of The Boy, just asking him to let her sleep on his barcalounger every so often. And that The Valet makes room for all of this is eternally in its favor. Park in front of it and sit yourself a spell, you’ll see.