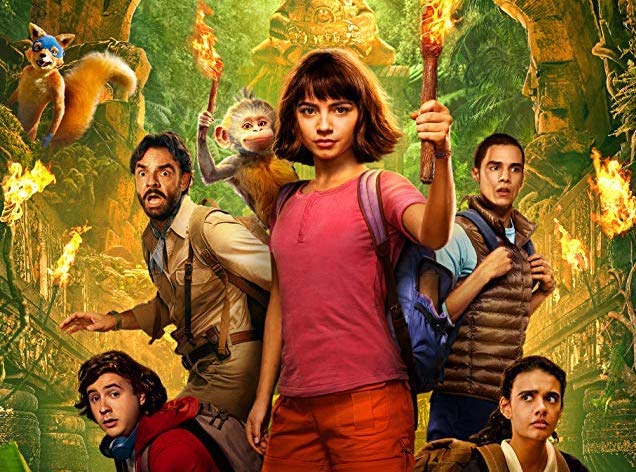 Here’s the thing: I, and the rest of the internet, owe Dora and the Lost City of Gold an apology. When news hit that Paramount would be making a (snicker) live-action, teenaged Dora The Explorer movie, it instantly became the butt of so many jokes. The idea seemed at once to be indicative of all the worst Hollywood trends, unnecessarily mining a beloved property for cash while likely plowing under the very traits that made it so beloved, in a bid to make it appealing to as many key demos as possible (and early reports linking Michael “Cue The Pyrotechnics” Bay to the movie as a producer didn’t help assuage any concerns a bit). There were so many obvious ways that the film could go terribly wrong, but never once did I stop to consider what it would take to make the film go right.

Well folks… Dora and the Lost City of Gold is exactly what the “right” aged-up, live-action Dora The Explorer movie should look like. Directed by James Bobin and co-written by Nicholas Stoller (two of the minds behind 2011’s The Muppets and 2014’s Muppets Most Wanted), it’s a crystalline preservation of the indefatigable, can-do charms of the heroine, and simply inserts her into a whole new jungle: High School. What happens when this girl, with her monkey friend and her backpack and her survival skills, comes face-to-face with “normal” teenagers? That question becomes the springboard for the most tried-and-true of teenage plots — how to fit in while still being yourself. This isn’t a movie where Dora has a sexual awakening, or Dora faces serious life-or-death stakes, or Dora’s parents split up and she gets angsty and changes into black shorts and combat boots for a change. Simply put, this isn’t a movie that’s trying to inject unwanted reality into the world of Dora The Explorer, or “update” her into something she isn’t. Instead, it takes the internal logic of Dora and celebrates it, while also recognizing that there’s enough ready-made conflict by taking this world, and this girl, and introducing them to outside influences. And by “conflict” I mostly mean fun. Seriously, this movie is a total treat!

Dora (Isabela Moner) has been living in the South American jungle her entire life, while her parents (Eva Longoria and Michael Peña, both dripping with charm) have been investigating the legendary Parapata, a.k.a. the Lost City of Gold. When she was younger, Dora had her cousin Diego around to play with her, and together they imagined a magical reality that was theirs to explore — a reality where backpacks and maps could talk and viewers were waiting just beyond the frame to learn key phrases in Spanish. But eventually, Diego moves with his parents to “The City” and Dora is left to grow up alone. Well, alone save for her monkey, Boots. And that might just be my favorite thing of the many clever tricks this movie pulls. On one hand, it nods to the original cartoon by explaining familiar features of it as a childish delusion (or, later, as an actual spore-induced hallucination), but it also makes room for Boots and Swiper the Fox (and Dora herself) to be real, realized characters, existing in the world as-is with zero explanation. We can have it both ways! Somehow the cartoonishly unrealistic CGI of the monkey and the fox add to the charm rather than detract! Essentially, that’s your barrier for entry: if you can accept Boots, you can accept anything this movie throws at you.

Anyway, fast forward ten years and Dora’s parents have found the final clue to Parapata’s location, but they’ve also lost a bit of faith in Dora, who takes too many risks when exploring on her own. Instead of bringing her with them into the wilds of Peru, they pack her off to “The City” to live with Diego’s family and enroll her in the public school system. Diego (Jeff Wahlberg) isn’t quite sure what to make of his cousin, who hasn’t changed a bit. She’s not socialized, but that also means she’s entirely unencumbered by the social norms of high school. She’ll march up to anyone and say hello, be they nerd or jock or outcast. She’ll wear her unique knowledge on her sleeve. She’ll make up cute songs to pass the time, and even prance like a peacock at the school dance. Dora is just Dora, but it’s Diego who has changed, and he’s stuck trying to help her navigate this dangerous new high school adventure while cringing as she upsets his precarious place in the social pecking order by association.

Dora isn’t stupid. She knows she doesn’t fit in, but she also refuses to pretend to be someone she isn’t just to blend in. Adding to her worries is the fact that her parents have suddenly stopped checking in with her, and she has no idea if they are OK. Dora, surrounded by family and a community for the first time in her life, is lonelier than she’s ever been. Which is why it’s almost a relief when she gets kidnapped by treasure hunters who think she can help them locate her parents and Parapata! Well, it’s a relief for Dora, who is whisked back to her element in the jungles of South America. But she isn’t the only one kidnapped, and for Diego and their fellow classmates, straight-A princess Sammy (Madeleine Madden) and awkward loner Randy (Nicholas Coombe), this is a nightmare. Can Dora keep her friends safe, rescue her parents, thwart the treasure hunters, and prove that she’s just fine the way she is along the way? Can you say “Duh”? 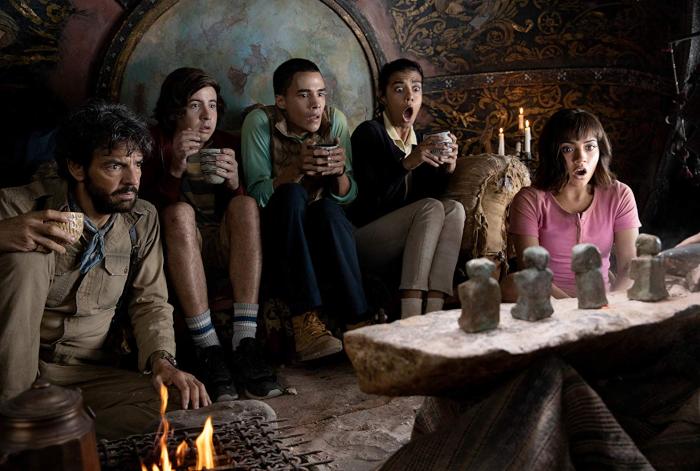 And look, if we’re going to quibble about the plot then sure, MAYBE Dora’s parents should’ve been looking in the mirror when asking themselves why their dangerously unsupervised teen doesn’t show better risk-assessment in the dang jungle. And MAYBE that scene where Dora and her friends are “rescued” from kidnappers could have put more weight behind the “take us to the US Embassy” option before going all-in on “Let’s rescue Dora’s parents while we’re here!” We could also quibble about the performances, which turn being broad into an art form (Eugenio Derbez as Alejandro, their ally with a secret, is basically a living cartoon and that’s not a complaint). But also? I don’t care. This is the sort of unapologetic Indiana Jones Lite I can get down with. If I’m willing to accept that Dora can be pursued by treasure hunters and masked foxes that talk like Benicio Del Toro, then I’m obviously willing to accept a lot of nonsense in my kids’ movie. That level of acceptance allows the movie to slip in some clever nods to the adults without skipping a beat. Teenagers casually reference the many waves of colonizers who could have looted a temple, for example. There’s a scene where Dora’s backpack sets off the metal detector at her new school, and while the ensuing unpacking of said bag is played for laughs (her survival kit is DETAILED, y’all), it’s also a way of acknowledging the threats our kids face without being preachy. The only thing more absurd than Dora bringing a personal generator to school is the fact that we have to install metal detectors in our schools in the first place. When Dora points out to the security guard that the one item he left her with — a yo-yo — is actually the most lethal item of the lot, it’s a joke that works as a Chekhov’s gun for the back half of the film AND an acknowledgement that all too often we fail to recognize where the real dangers lie when trying to protect our communities.

Speaking of Chekhov’s yo-yo, this movie is an absolute masterclass in third act payoffs. Almost every random detail comes back around in the end, making it a surprisingly satisfying viewing experience. Like, I don’t know what more there is to say. Do you like fun, and friendship, and climactic dance numbers, and songs about poop? Do you like movies that celebrate individuality? Do you like strong female characters who can be smart and capable and inquisitive and happy and nice, and who can be lonely without needing a romance to fix anything? Do you like adaptations that respect the source material, but also update it in smart and — crucially — faithful ways? Do you like crying tears of actual joy? Then go see this movie. We may not have asked for a live-action teenaged Dora The Explorer movie, but we got one anyway — and it is better than we deserve.

← Kid Rock Says Taylor Swift Is Only a Democrat to Get into Movies | Review: 'After the Wedding' Elevates a Familiar Conversation About Wealth and Morality →