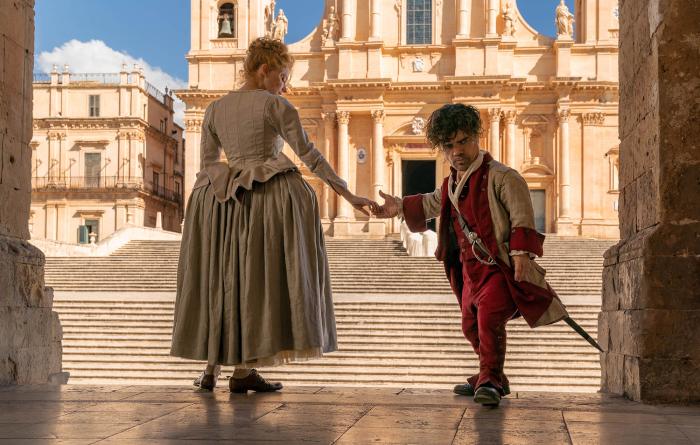 Review: Peter Dinklage is Excellent but the Music of ‘Cyrano’ Has Issues

The tragicomic romance of Cyrano de Bergerac has been adapted countless times over the past century and it’s not hard to see why. Edmond Rostand’s 1897 play has it all: devastating wit in rhyming verse, an achingly sad love triangle, and a hero so charming and full of panache that he basically invented the term. Everyone’s played the role, from José Ferrer and Gérard Depardieu to Steve Martin and James McAvoy, typically while wearing a giant prosthetic nose to convey the supposed ugliness that has left Cyrano unable to express his love for Roxanne. This time around, nose-free, Cyrano is being played by Peter Dinklage. And now he sings!

Adapted from the off-Broadway musical by Erica Schmidt, with music from the Dessner brothers of The National, Cyrano sees Dinklage become the romantic hero that fans have been crying out for since the early Game of Thrones days. Cyrano has it all: incredible swordsmanship, the best jokes in town, near-legendary poetry skills, and the fact that he’s Peter f**king Dinklage. Alas, it is not enough for him to confess his love to his childhood friend Roxanne (Haley Bennett). Smothered by his pride and belief that this beautiful woman would never love someone like him, he finds himself acting as a creative conduit to Christian (Kelvin Harrison Jr.), the sweet but tongue-tied soldier with whom Roxanne has become infatuated. Through his ghost-written letters, he can confess his true feelings but allow Christian to be his handsome alternative. To make this love triangle more complicated, Roxanne is also being courted by the cruel Dud de Guiche (Ben Mendelsohn).

If you’re even only vaguely familiar with the Cyrano story, then nothing in this adaptation will surprise you. It is faithful but the language doesn’t fly from the screen as it does in the original text. This is to be expected with any adaptation or translation, and Dinklage and Bennett are so good that they can make anything sound rapturous to one’s ears. In his introductory scene, where Cyrano heckles a bad actor into submission, Dinklage is charming, cheeky, and just sardonic enough to make you truly believe that he could close a theater through sheer nerve. He is as convincing as the lovesick fool as he is while showing off for the masses. Frankly, I wonder if it’s not too late to swap out Javier Bardem for Dinklage in this year’s Best Actor category. He’s that deserving.

Credit also goes to Bennett, a perennial supporting player getting a rare chance to shine as a lead in a notoriously tricky part. It’s easy to make Roxanne a ditz or shallow little girl who can’t see what’s right in front of her. Bennett gets that the character is an outsider whose beauty barely cloaks her struggles. She’s vivacious in her optimism to find love rather than marry for security, but clearly troubled by the lack of options her life as a poor orphan presents to her. It also helps that Bennett is really the only one of the main cast whose voice is able to tackle the songs.

As a musical, Cyrano is weak. The music by the Dessners often sounds pretty and appropriately romantic but lyrically doesn’t meet the legendary rhymes of its eponymous hero. Most of the numbers blend together with little difference between a joyous moment and a tragic one. This was clearly a musical designed for an intimate setting, with the songs crafted to meet the limitations of its lead (bless Dinklage but this is not his strongest suit.) This could work but there’s such a gap between what we hear and what we see that it leaves the viewer wondering where it’s all going.

Joe Wright, the director who has never been known for his restraint, flings absolutely everything at the wall to see what sticks. The dance scenes are grand in scale, the sets overwhelmingly detailed, and even a moment as quick as the pouring of wax onto a letter is shot like it is blood seeping onto the paper. This brand of heady maximalism has worked to great effect for Wright in tragic romances like Atonement, so it’s not hard to see why he’d be brought on board for Cyrano. For any other kind of musical adaptation of this material, he’d be perfect. But it’s hard to overlook the mismatch of material and scope. The Dessner brothers’ music feels like it should be played in a small room with hushed whispers from the crowd. Wright shoots the numbers like he’s Vincente Minnelli in the 1950s, creating the sort of obscenely expensive MGM mega-musical that should run for four hours plus intermission. Wright does love to do this when his scripts are lacking (hello, Darkest Hour). It’s easy to be taken in by this ambition. One scene set on the battlefield as the soldiers prepare for their final days is a rare moment where the music and imagery work in tandem. But most of the time, when you see this kind of scenic splendor going full throttle, you yearn for a major key change or belt from a Broadway mainstay.

In a year where musicals have had something of a mainstream moment, Cyrano is no West Side Story but at least it’s no Dear Even Hansen. The earnestness is admirable and Dinklage is undoubtedly one of our most appealing leading men, but I, a lover of the genre, spent a bit too much time wondering why this was a musical. Given that this is a star vehicle for Dinklage, it’s a shame that the music lets him down. When he’s not singing, he’s one of the best on-screen Cyranos we’ve ever had, so effortlessly balancing the fear, pride, charm, and hopelessly-in-love power of this icon of the stage. Watching him just go to town in that duel in verse is the stuff of dreams, but the music hinders his force rather than elevating it. He gets through these moments through his incredible expressiveness, fortunately. Again, he’s Peter f**king Dinklage and he’s not going to let anything stop his moment in the spotlight. If only the music understood that.

Cyrano opens wide across the UK and North America on 25th February.


← 'Law & Order' Creaks Back in to a Changed World | 'Kimi' Review: Zoë Kravitz Shines In a Good, Not Great Soderbergh →