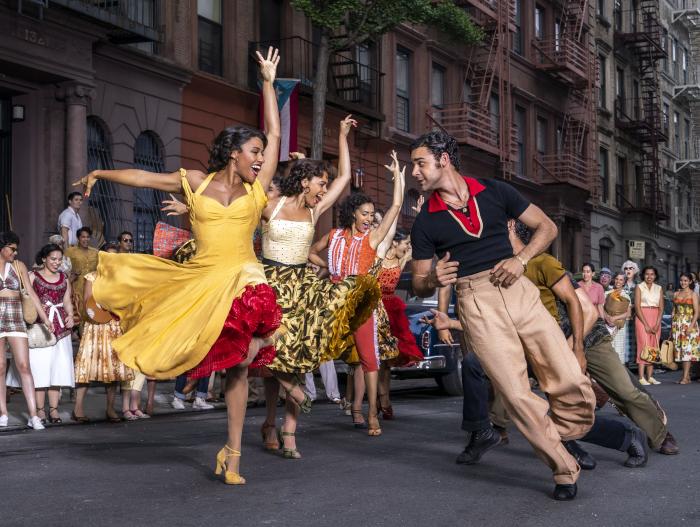 Spielberg's 'West Side Story' Gives Us Something To Sing About

The camera sneaks over and through the rubble of the demolished city, block after block a heap of soot and stone. Little urchins, half-Newsie half-street-rat, poke their smudged faces up from between the rebar to catch the setting sun, its apocalyptic glint dazzling their angry, hungry eyes. Their future is the push-broom, blown into the dust-bins of history and its forgetful nature, and these are those moments when they stack their smashed brick kingdoms up as high as they’ll go just so’s they can watch them topple, topple but good, and take what with them they can in their chaos. The kids know its all downhill from here—straight to the river where the frenzied rats dash for flat surface as floods come, come what may. Sing ‘em while ya got ‘em, buddy boys. Future’s looking bleak.

I learned not to get myself too worked up about remakes anymore after 2018, when Luca Guadagnino remade Suspiria, one of my favorite horror films, and in so doing made my favorite film of 2018. Ever since I’ve come to terms with the fact that if they’re bad these remakes can’t ever blot out the original, which remains for us to watch at any point, and if they’re good, well, hold on to your butts. Well Steven Spielberg’s West Side Story is good—it is very, very good. I’ll admit up front—and in the process no doubt lose the goodwill of many!—that Robert Wise’s 1961 classic and beloved-by-others adaptation of West Side Story has never been my jam. It typified for me a certain sanitized mid-century vision I’ve long abhorred, with its snap-fingered dance-fights and liberal buckets of brown-face. With Natalie Wood’s lips flapping as some other woman’s voice poured out.

What many fans have long held to be the apotheosis of the genre has long been a check-list culmination of the things about Movie Musicals I didn’t like. Knowing other that people’s reverence for this material far outweighed my own, I didn’t go into this here new remake with a whole lot of flowery joie de vivre whistling in my heart of hearts—that reverence would surely serve as a scene-by-scene reminder of my place as a dour wallflower at this particular dance-party. Y’all have your sing-alongs; I’ll be scowling from the sidelines as the dresses swirl up and the songs bounce tennis-ball-like back and forth between Jet, Shark, assorted hangers-on and side-pieces, officers of the law and the like.

But a funny thing happened on the way to the Rumble. The smart little changes that not only Tony Kushner’s fine script or Janusz Kaminski’s swirling camera make to the material, but the necessary changes via time and progress itself—like the one that dictates they now had to hire ethnically appropriate actors first and foremost, which seemed obvious when the remake was announced but which, in practice, end up making so much difference it can’t be understated. Seeing actors like Rachel Zegler and Ariana DeBose (Ariana DeBose!!!) and David Alvarez—and yes the great Rita Moreno back for a moving second round inside this world—rip into these characters that always should have belonged to them, after all these years, it’s impossible to undersell the magic of that experience, that belly-feeling, alone. It’s a rightness long denied, an exuberance that bursts like big blue fireworks over the barrio.

Everything sparkles and radiates with righteous movie magic from there on up. Spielberg makes basically every right choice, not just for right now but also with regards to magnifying what’s always been this musical’s simple timeless story, speaking as it does to the ways the system endlessly turns us on each other, making weapons materialize out of thin air if we fixate on the spaces that separate us over the ones where we come together. How we gather ourselves into rival tribes with made-up names and make blood sacrifices that accomplish nothing but interpersonal pains and tragedies, all as the gleaming personality-free skyscrapers shoot out of the pavement, walling in the poor and the othered on every side. This is a movie that, in its way, really gets to the gut of what ails us, even as the songs and dance, man, glimmer and glow at its front center stage. It aches with real pain, pain it earns and explicates, and makes as art must beauty, sorrow, and an extended hand outward from it. I simply felt more alive, with a better handle on what it means to live, at its end. Watching Spielberg’s retelling I felt, finally, what this story’s really good for. And if that ain’t worth singing about I don’t know what for.


← 'Hawkeye' Recap: 'Partners, Am I Right?' | 'National Champions' Marshals a Stellar Cast to Debate Whether Student-Athletes Should Be Paid →


Image sources (in order of posting): Disney,
Most Viewed