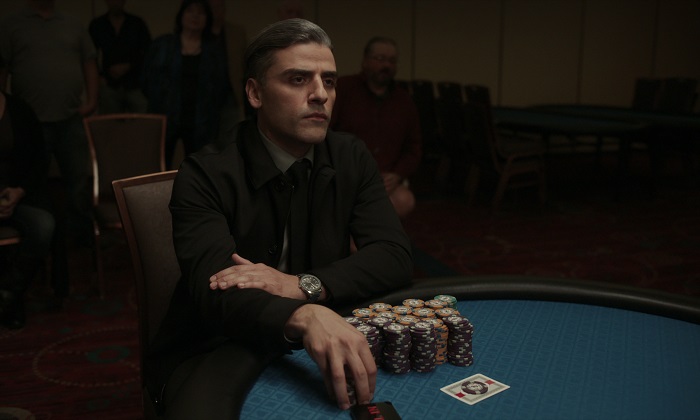 Review: Paul Schrader’s ‘The Card Counter’ Is an Unwieldy Mixture of Post-9/11 Excuses and Guilt, and Oscar Isaac Holds It All Together

Maybe you listened to all my yelling and you watched The Report or you watched The Mauritanian or you’re going to watch Alex Gibney’s documentary The Forever Prisoner, and so you know everything there is to know about how America’s Department of Justice made torture legal after Sept. 11, 2001, and how the CIA and FBI and American military used those “enhanced interrogation techniques” (EITs) and how the civilian consultants who made up those methods made more than $80 million for their efforts, and how there are still people at Guantanamo Bay who have never been charged with a crime but who have been held by the U.S. government for decades, and how the soldiers at Abu Ghraib who took pictures of their humiliation and abuse of detainees only served a few years for their actions. If so, thanks for abiding by my complaints! And yeah, you should probably still watch Paul Schrader’s The Card Counter.

I said “only served a few years” in that preceding paragraph because I tend to think that maybe crimes like torturing people, failing to gain any intelligence from it, torturing them some more, mocking them for it, and then in some cases killing them deserve more punishment than what the people involved in the Abu Ghraib pictures got. (And remember that the people in the Abu Ghraib pictures are the only ones whose actions became public; the use of EITs was more widespread than that.) I’ve grown more frustrated and uncomfortable with the “Well, the soldiers were only listening to orders” explanation over time, and I know that’s my own rigid ideology. I also tend to think that someone will swoop in with the argument that the power apparatus who approved torture and trained soldiers to do it should have actually shared in the blame. Of course, that’s true; the post-9/11 period in American history is littered with war criminals. But I wonder: Where does our national consciousness stand on this? Where is the outrage, or even the acknowledgment? When do we grapple with the cost of so much cruelty, complicity, and despair?

I lay down all my contrasting feelings on this because I saw them reflected throughout The Card Counter, which follows First Reformed as another Schrader film in which the director and writer seems to be looking around at the world, wondering how it got to be this bad, and trying to figure out how we respond to all that seems irreversible. Can we save humanity? Can we save another person? Can we save ourselves? We’re living in a time right now of sporadic national reckoning when it comes to America’s actions after 9/11, when the pop culture that dares to engage with this subject at all seems to be in existential opposition to itself. “We were wrong, but who was the most wrong?” is a question The Card Counter seems to be asking, and it places that query within the mouth of Oscar Isaac, whose performance in this film is yet another project-elevating effort from the actor after Dune and Scenes from a Marriage.

This is the Isaac from Triple Frontier, the Isaac who can wield sarcasm and cynicism like weapons against anyone who dares believe that nice things could ever happen, that life could ever be more fair, that the world could ever get better. Isaac’s character wears a certain uniform this movie—all grey and black, chunky sunglasses, a nice watch—and he keeps his eyes down and his presentation neat and his voice steady, and it is an attempt at anonymity and control for a man who was deprived those for years. His stillness is an affect (there is a scene where Isaac’s character invites getting punched in the mouth and then pops back up, grinning through a mouthful of blood), and his smile veers very close to a sneer, and the precision with which Isaac builds his titular protagonist sets this film’s tone from the very beginning. By the time the film demands a skewed version of paternal warmth and a bashful attempt at seduction, Isaac easily pivots into those layers, too. Whatever the flaws of The Card Counter—and they exist in a slow first half, slightly muddled character dynamics, and overbearing soundtrack choices—they don’t emanate from Isaac.

The Card Counter follows Isaac’s William Tell (note the name), who through voiceover narration fills us in on the recent years of his life: 8.5 years in the United States Disciplinary Barracks at Fort Leavenworth in Kansas, during which he learned to count cards. He knows blackjack, he knows poker. He knows how to play against the house compared with playing against people, and he knows how to turn the advantages toward himself. It takes patience and attention and a long memory, and Tell had nearly a decade to work on all that. “I was an American kid. Confinement of any kind was terrifying to me,” Isaac’s Tell says, and you should note that too.

Tell makes money by playing on the gambling circuit, traveling to various casinos and cities, winning a few hundred or thousand dollars here or there, and keeping to himself. Schrader shows us Tell seated at table after table, arm and arm with people who don’t give him a second look, and that routine and monotony seem like a ritual—like an absolution. “I’ve met enough people,” Tell says, but is any person really an island? Eventually, he makes two connections that will alter his intended life of quiet. First, his consistency catches the eye of La Linda (Tiffany Haddish, having the time of her life with dialogue like “I’m always looking for a good thoroughbred”), who runs a stable supporting gamblers with outsider investment money. They then share the profits, and Tell could make more—but he would also be beholden to someone, which he doesn’t want. Until, at a casino that is also holding a military convention, he notices the keynote speech: “Recent Developments in Interrogation and Truthfulness,” delivered by a retired Major John Gordo (Willem Dafoe).

Gordo and Tell share a terrible history, and the overlap brings in the other character who will alter Tell’s trajectory: 20something Cirk (Tye Sheridan), who Tell nicknames the Kid. The Kid recognizes Gordo, and he recognizes Tell, too, and the plan he has for both of them pushes The Card Counter forward. Through a horrific, uninterrupted walk through a black site facility (its unsettling, nightmarish quality amplified by Schrader’s exclusive use of fish-eye lenses and kaleidoscopic mirroring). Through gambling-circuit stop after gambling-circuit stop, during which Tell and La Linda grow closer together. Through an ugly altercation in which we learn what Tell keeps in the duffel bag he totes from motel room to motel room. “The apples weren’t bad. The barrel they came from was bad,” the Kid insists, but Tell isn’t so sure. What made him capable of the horrific acts for which he went to prison, and is he capable still?

This is where Schrader’s ideology becomes muddled in an understandable way, as the film moves through arguing about Tell’s culpability, innocence, or guilt. There’s a reason why Schrader and Martin Scorsese are such close friends and collaborators: They provide the same kind of moral uncertainty to their protagonists, and The Card Counter is devoted to the question of when a man’s actions are his own, and what kind of weight they carry. Tell speaks certainly about violence being a toll your body absorbs forever and about how easily desperation and hatred can be taught, and tentatively about the power of forgiveness, and Isaac captures the inherent opposition in this man who isn’t sure the latter can really offset the former. The violence that occurs off screen in the film’s penultimate scene, complemented by Robert Levon Been screeching, jangling score, further emphasizes that disconnect. Perhaps the final suggestion of The Card Counter feels like a retread of what Schrader has offered up before as his solution for the world’s most uncomfortable moral questions, and perhaps the film lets Tell off easy. But the certainty with which Tell says “Nothing, nothing can justify what we did,” and the willingness the film exhibits in trying to work through the societal and individual ramifications of America’s worst failings, makes The Card Counter as uncomfortable, subversive, and tragic as Schrader at his best.

The Card Counter is available for digital rental and video on demand.