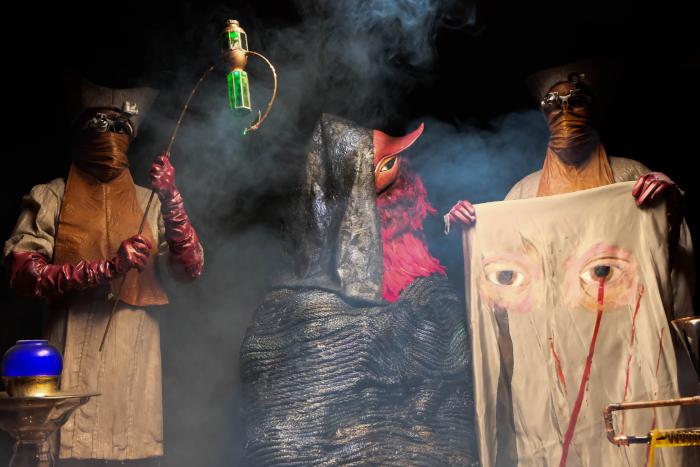 Is there anything more thrilling than realizing you have absolutely no idea where a movie is going? Sure there is comfort to be had in the formulas—how many Slasher Movies about a group of people going to an isolated cabin in the woods or Disaster Movies about separated families being reunited by an exploding fill-in-the-blank have I happily consumed? But give me a movie where you suddenly realize that all the rules—hell, all the previously dictated logic of storytelling and perhaps even all of human existence for good measure—have been tossed into the incinerator, where we’re all suddenly flying by the seat of our soiled dungarees, and I’ll show you one happy little movie-goer.

And so it goes smile-wise with A Wounded Fawn, the thrilling, funny, and WTF-as-all-get-out new horror flick (premiering at Tribeca this week and hitting Shudder later this year) from director Travis Stevens, who’s previously fed us finely with his movies Girl on the Third Floor and Jakob’s Wife. Like those two films (both of which I heartily recommend) Fawn walks that unnerving path between Horror and Comedy where a laugh is set up only to be immediately violently crammed back down—where our minds are so boggled by what we’re seeing that we might giggle in the moment, only to then go on to spend a lot of money on therapy sorting out what some of these images have permanently done to us in the every-moment-after. Fawn is the best sort of balls-out surrealism, where it pulls the rug out and turns it into a glass of orange juice into a howling void into your mother’s right elbow. There are things here you just can’t un-see, heavens bless it.

Broken into two acts (with a not un-sizable prologue) A Wounded Fawn stars Sarah Lind as Meredith, an extremely likable museum curator who thinks she’s finally met the man of her dreams in the handsome man Bruce Ernst (played by the handsome man Josh Ruben, the writer-director-actor and new Scream King behind Scare Me and Werewolves Within). And if “Ernst” is already summoning up images of post-apocalyptic landscapes full of squiggly weirdo people for you, well I can only figure that was very much on purpose—this here is a movie that will gleefully goose even the most basic of art-history fetishes.

Unfortunately for Meredith, we’re already privy to the fact that this prospective romance-to-be is a little more complicated than she’s figured, given that the “not un-sizable prologue” I just mentioned has already shown us Brucie-boy is actually a deranged serial killer who spends his spare time stealing priceless statues and slashing women’s throats, all while a gigantic red owl person stands in a very red doorway and goads him ever on. Never trust an Ernst, y’all!

But in the hallowed tradition of Hitchcock’s definition of “tension,” our knowledge about Bruce being bad — news is in the bomb waiting beneath the table — we sit back for the regularly scheduled program, patiently waiting for Meredith to one, figure out her doom, or two, blow up real good. One of two options, right? Or is it? The flat arc of the story being laid out in front of us sure wants to nod and nudge us toward the familiar paths we know so well — right off the bat Bruce invites Meredith to the country for this weekend, and lo behold we’ve got a what? We’ve got a movie about a group of people going to an isolated cabin in the woods! Hey, I know what those are all about! (I mean didn’t we just see all of this play out with Sebastian Stan in Fresh a few months back?)

And yet real fast those strands start unraveling, and faster still I realized I had absolutely no idea where this movie was going. I did just mention a “gigantic red owl person” after all, and that’s only been the prologue! There are recognizable hooks that Stevens hangs the meat of the movie on — if you’re a horror nerd worth your salt looking at that costume-y owl should make you think of Michael Soavi’s 1987 uhh let’s say “eccentric” Italo-slasher Stagefright, which has a chainsaw-wielding killer wearing, you guessed it, an owl costume. (Man it is wonderful.) Stevens and his talented D.P. Ksusha Genenfeld will also insert visual references to flicks as varied as Invasion of the Body Snatchers and The Evil Dead, Scream 2 and The Strangers. But these aren’t the sort of meaningless referential call-backs that trash like the latest Jurassic World movie conjures up — the sort that say, “Hey here is that shaving cream canister you remember, look at it, haha, remember that?” Stevens instead seems to want to make these half-familiar half-remembered images feel more akin to totemic, like the shared language and symbols of our communal nightmares. He means to tap into that collective dread and speak to us somewhere deeper, somewhere uncomfortable. And does he.

A Wounded Fawn taps into that otherworldly, only slathered absurdly over the top of the familiar—it’s like we’re trying to read ancient runes that have been dug up in a suburban back-yard. Hieroglyphics on the barbecue! There’s a lot of explicit talk in this movie of Myth (none of which I feel like spoiling) but one gets the sense that that is what Stevens is reaching for—a deeper language. That’s why I find his comic beats, which verge on Camp at times (shades of Raimi for sure), so totally invigorating. It’s like they get our guard right down, just so he can sneak in the willies. It’s Joe Pesci playing the clown until he very much isn’t. Stevens plays beautifully with that tension — we’ll have a character point at something and say in an utterly affectless tone that they see something, full stop, and it lands as funny because of the character’s bizarre delivery of it. And then we actually see the something the character is seeing and it’s not funny, it’s not funny ohhhh helllll nooooo.

There are moments in Stevens’ previous films that reverberate like that—when we finally see the “Girl” on that titular Third Floor her strange coos first seem a goof, but best believe I swallowed my laughter so fast there that I choked on it. Stevens loves a mask, a vestige of archaic theatricality, a falseness that feels Lynchian in its embrace of absurdness sitting plainly in natural light. If you remember that sudden two-dimensional insert of Sarah Palmer removing her face in Twin Peaks: The Return (and who could forget that once you’ve seen it) you’ll feel me on what I mean here. A Wounded Fawn really goes for broke on that front — it’s hyperbolic horror, ridiculous as a means to reach those vibrating, terrified, totally ridiculous places buried just under the surface of us. It speaks a language we don’t, yet one we understand. We remember from campfires, from cave walls, from scratches left carved in the bones of our ancestors. Something beneath our skin shudders to recall, and in turn we too shudder. We we we all the way home.


← Video: Why Marvel's Superheroes Are Defenders of the Status Quo | 'A Christmas Story Christmas': Sometimes It Really Is the Thought That Counts →


Image sources (in order of posting): Shudder,
Most Viewed