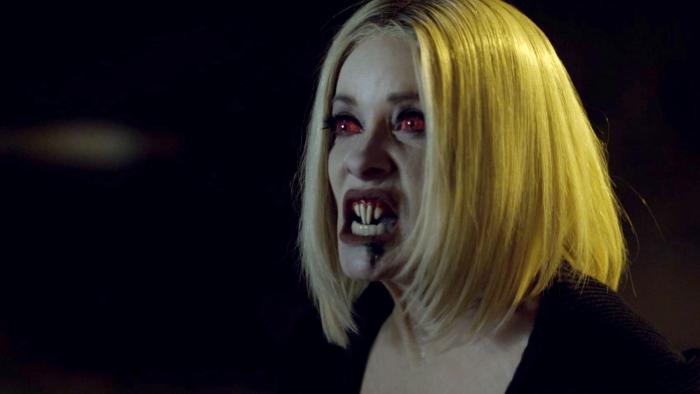 Anne (Crampton) is the portrait of a meek pastor’s wife. Shaking hands after church services, she stays on top of caring both for the community and her husband. But there’s something buried within her, the woman she was before settling down for a quiet life with Jakob (Fassenden). When she meets up with an old flame, Anne is faced with desire to be the mythical and exciting woman of days past. After a chance encounter with some bloodsuckers, she gets the opportunity. Turned into the vessel for a vampiric leader, Anne struggles to keep her new cravings under wraps, which is at odds with her competing desire to let it all hang out. As townspeople start turning to corpses, Anne and Jakob’s marriage is tested. As Anne becomes less apologetic about who she has become, Jakob has to decide if he is willing to accept her as she is.

As the title suggests, it’s a film about a woman whose identity is defined by a man. While the script (penned by director, Travis Stevens, along with Kathy Charles and Mark Steensland) tries to portray her transformation into a roaring woman, it fails to do so with any subtlety or agency for its lead. The most beautiful moment of Anne being presented as a screaming woman trapped in the shell of a wife is when she nervously applies lipstick before quickly rubbing it away. Afterwards, she bumps into a list of hollow characters who tell her who she is supposed to be, leaving her no agency in her own story of finding it. Her awakening pushes her from one leader to the next in a way not obviously satirical or deep enough to reflect themes like those in The Witch about choosing one oppressive leader over another. It’s diet-feminism by way of makeovers and on the nose-dialogue about missing the ol’ spark.

Steven’s answer to the romantic comedy is a bloody mess of bibles and pointy teeth. While Anne’s literal appetite for blood and figurative appetite for freedom start to guide her, Jakob starts to worry, feeling pressured to adapt to his wife’s changing needs. Where the script is flipped is when Jakob, who one might expect to approach a vampire with holy water and a prayer, approaches his wife with love and a willingness to change. It’s something that would have made for a satisfying and fun ending but happens somewhere in the second act.

The delicious story of the blood-sucking wife of a preacher man gets stalled in its midsection, stuffing itself with clunky scenes of a couple hiding bodies that just can’t hold up as against Santa Clarita Diet. Time is wasted on comedy with a distinct lack of timing and delivery that can’t decide if it’s campy or straight. It’s dipped in B-movie aesthetic and would have done better to lean farther into that over its unkept promise of approaching vampirism as a metaphor. It’s unfortunate this one didn’t get in-person festival premieres, because one could imagine a fest crowd lapping up the red soaked gags. That said, the leads are delightful and side characters, like a dumb cop and Anne’s sister-in-law, keep the whole ordeal jovial enough to force many cracked smiles.

Stevens’ camera has a weird obsession with teeth. That’s not a criticism. An unchanged Anne bares her teeth to herself in the mirror as she analyzes her dull skin. She winces at a careless Jakob brushing his with vigor. Then, after her foray into new grub, she visits a dentist, who plucks away at her pearly whites before singeing them with a UV lamp. It’s a fun quirk threaded throughout the feature that, while often having nothing to do with anything vampiric, is a delight to have peppered into a movie about a pointy teethed neck biter.

Teeth out or not, Crampton is devouring the scenery. It’s obvious she had a blast as the dancing housewife with blood on her gums. Fassenden compliments her well as a commanding presence who doesn’t steal her limelight. The horror icons are enough to drag horror fans to the seats, and they do just enough to justify that. Black trimmed white blouses and large dark sunglasses will likely be popular purchases around Halloween time.

Jakob’s Wife, an icon led horror comedy about a meek spouse of a church leader turning into a vampire, should scream “instant classic,” but doesn’t manage to go all the way. It’s too restrained to let Crampton’s Anne embody the woman’s awakening; yet it’s not restrained enough to avoid beating us over the head with the marriage counseling. Anne gains a voice, albeit a quiet one, and while the power dynamic in the marriage changes, most of the transformation is limited to a single spicy scene of missionary sex.

Jakob’s Wife is now available to stream on Shudder.