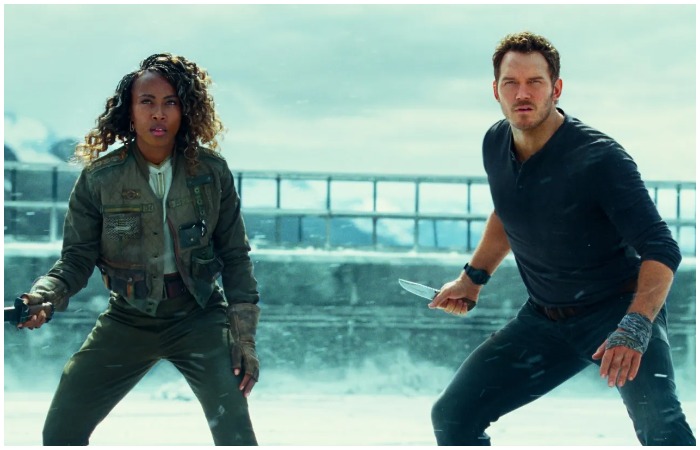 Review: 'Jurassic World: Dominion' Is Like a Raptor Claw Across the Belly

Picture it: it’s the weekend of May 28th, 1993. A 15-year-old boy and his cousin have gone to the movies to see the new Super Mario Brothers movie because they are 15-year-old boys and they don’t have any taste in movies yet. The theater is completely empty except for these two teenagers because it turned out that hey, other people, they had some taste. The lights go down. The trailers begin. And immediately that by-now bone-deep familiar John Williams score, that “bah-bahh, bah-bahhhhhhh” one, begins to play. Helicopters fly, Sam Neill removes his glasses and looks up dazzled and dazed, and we see a single Tyrannosaur foot squish into some mud.

Yes indeed it’s the original Jurassic Park trailer, and within seconds my cousin and I have stood from our seats and we have begun screaming. We have started running up and down the aisles of the theater, and we are screaming the sounds of the purest most joyous dork ecstasy at the tops of our lungs. It’s quite possibly the happiest I have ever been. See, there was no internet in 1993 (not one that we had access to anyway), and so this was the first time I’d seen the trailer, even though the film was opening in just a few weeks. Crazy to think, right? But this was how nerds-in-the-making were made back in 1993—sudden and violent, swift and overwhelming. I went to see Jurassic Park ten times that summer; it was my Star Wars.

So how’s the famous saying go? “Fool me once, shame on you, but fool me twice and shame on me.” Well fool me thrice and shame on the entire dang world, I guess—the Jurassic World anyway. The Jurassic franchise has not been kind to me over the years, but this modern stretch of it, starting with Colin Trevorrow’s original Jurassic World in 2015, up through J.A. Bayona’s 2018 sequel and now here this weekend’s latest dino-atrocity Jurassic World: Dominion, these movies have been absolute and total inner-child killers. Bayona’s a little less so since he’s a director with some actual filmmaking skills and he managed to insert some style into that otherwise sordid nonsense. But Trevorrow’s two? Yeesh. It’s like he’s the Tyrannosaur foot, and I’m the mud. Squishhhhh. Lights out, man.

What is it that our old friend and preeminent chaotician Dr. Ian Malcolm (Jeff Goldblum) says in the original film? That these scientists stood on the shoulders of geniuses to accomplish something as fast as they could, and they slapped it on a lunchbox without ever giving any thought to whether they should be doing any of this in the first place? That’s what each successive entry in the Jurassic franchise has felt like to its core—empty, soulless, not even worthy of the lunchboxes they’ve been printed upon. Yes, you can argue that there is plenty of soulless blockbuster movie-making these days, and I suppose that there always has been—hello, Super Mario Brothers movie. But because of my deep connection with Spielberg’s original films these ones actually sting. This franchise has left a mark on me, and not the happy T-Rex logo tramp-stamp kind—this is like a raptor claw across the belly, and I walk out of each one dragging a little bit more of my intestines behind me every time.

And yet I keep going. That’s what they keep counting on right? That we will wake up the morning of and it will feel like Dinosaur Christmas Morning all over again. I told myself after Jurassic World tore that perfectly nice personal-assistant lady to shreds for what seemed like five minutes and Chris Pratt durr’ed himself to pieces and Bryce Dallas Howard wore those damned heels that I was dunzo. And then the trailer to Jurassic World: Fallen Kingdom made it look like they’d mixed a Dinosaur Movie with a Disaster Movie and I got suckered in despite myself, because who doesn’t want that? And then it wasn’t really that at all and I hated that one too. And so I told myself, I really sat myself down and had with myself a firm talk—never again!

So what did they do? The crafty bastards went and played their ace, and they brought back all three stars of the original film, together for the very first time since 1993. Laura Dern as Dr. Ellie Sattler! Sam Neill as Dr. Alan Grant! And Jeff Goldblum as Ian Malcolm! There they were, the three of them all slightly more grizzled but as alien-gorgeous as ever, beckoning me from Dominion’s first trailer—“Come to us, decrepit and hollow-inside middle-aged-man—feel 15 again! You can do it!”

Spoiler alert: they didn’t do it. None of those three actors are at fault, but Jurassic World Dominion is one of the laziest loudest emptiest cash-grabs I’ve had the misfortune of sitting through in quite some time. Starting with the fact that once again Trevorrow proves that he doesn’t have any idea how to film an action sequence—Ian Malcolm might beg to differ but chaos is not a coherent strategy, and scene after scene after scene of Dominion just dumps us face-first into mayhem. There is no building of tension; there is no continuity of space or editing. Just because you can show us a gazillion dinosaurs marauding doesn’t mean you should, at least not without any meaningful raising of stakes or context—the pixels of their creation just dissolve into white noise at a certain point.

The plot, such as there is one, involves Maisie (Isabella Sermon), the cloned girl from the last movie, being kidnapped by a bunch of gene-splicing thugs led by Lewis Dodgson—and yeah if you’re an OG JP nerd like me that name should ring familiar as he was the sunglasses dude in the first film, the one who met up with Nedry (Wayne Knight) to steal genetic information tucked away in a shaving-cream can. (Spoiler alert: damn straight they’re gonna bonk you upside the head with that damn shaving-cream can again, and cue right up the world’s saddest “hoo” sound from the audience with it.)

In Dominion Dodgson is played by Cameron Scott (the actor in the original film went to jail for sexually assaulting a minor so he’s, uhh, clearly not back), and Scott is definitely having some fun riffing on the sneering Steve Jobs tech-billionaire archetype that’s become our era’s go-to villain. But to what end? There’s some gibberish about diabolically-mutated super-sized locusts devouring the world’s crops that is straight out of a loopier James Bond movie—indeed there are entire passages here that feel spliced in from entirely other franchises. It’s as if the writers spun a wheel, picked the name of another franchise, and said, “Add Dinos And Stir.” I mean several truly random Indiana Jones jokes? OK, why not! Wait, what movie are we watching again?

So somehow mid-film this leads to what feels like an endless half-hour of generic super-spy nonsense, with poor Dichen Lachman from Dollhouse forced to swan around in an impractically billowy fashion-jumpsuit and aim lasers at her prey. Once upon a time (circa 2007) a draft of a Jurassic Park 4 script leaked online, and oh how we all collectively scoffed at the idea of dinosaurs with guns strapped to their heads, and oh how innocent we turned out to be. Dominion has lasers, it has enough car chases to make Vin Diesel dizzy, it has a stereotypically sassy lady pilot (DeWanda Wise) who keeps dropping punch-lines and inexplicable action-hero poses all while her fabulous hair and make-up stays just so.

I wish any of this was as fun as it sounds, but it’s just noise. Braying, bleating, meaningless noise. Worst of all it’s just noise that distracts from the reason why we’re here in the first place (or the reason they dragged me back anyway), which is to watch Dern & Neill & Goldblum inject some old-school character and humanity up in here, Yes, while also running from dinosaurs. I mean, they managed it the last time!

And to its benefit Dominion does give us more of our original trio than I feared it might—this isn’t a Goldblum in Fallen Kingdom situation, where he sits in a courtroom for one minute and every bit of that footage ended up in the trailer. All three are fairly integral to the plot, and they do get to have some goofy fun that managed to resuscitate my brain for a scene here and there, every twenty minutes or so. Dern in particular remains such a whiz as Ellie, injecting just the right amount of curiosity and hopefulness into her scenes—just enough so that the clunky dialogue she’s weighed down with seems more inquisitive and playful than it does the ramblings of a dullard as it all no doubt reads on the page.

But none of those herculean efforts and moist-eyed memories of nostalgic yore can ultimately save this exhausted and ham-fisted script, especially as its last act devolves into a clusterfuck of The Force Awakens-esque callbacks in fan-service of call-backs; the entire climax of Dominion is as if someone took the climaxes of the last two films and pushed them together so violently their faces broke. And that’s just how I felt too. It doesn’t seem possible given the state of the world that I’d walk out of a Jurassic movie feeling worse than I did going in, but Jurassic World: Dominion, a single-minded meteor aimed straight at my soul, somehow managed that feat. So send me or send this franchise to the bone-yard, please—as far as I’m concerned the age of the dinosaur is dead all over again.