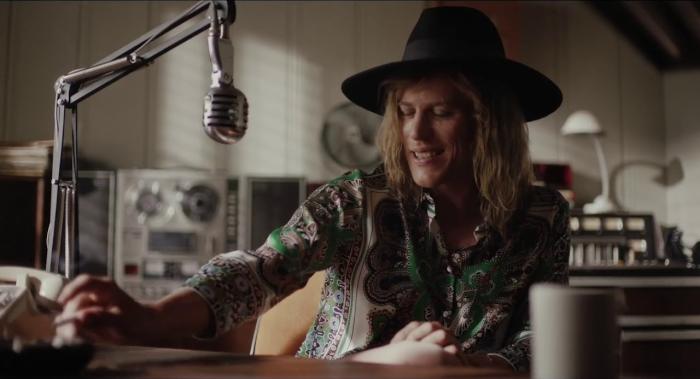 Review: Jeez, ‘Stardust,’ What Did David Bowie Do To You To Deserve a Biopic This Lackluster?

How do you solve a problem like David Bowie? Few entertainers have enraptured and challenged us as much as Bowie did over 50+ years, thanks to his ever-evolving style, his willingness to play with gender, a strident refusal to stick to the status quo, and, of course, some incredible music. He lived the kind of life that, had we not all seen him do so in the public eye for years, would have seemed utterly unbelievable. So, of course, it makes sense that someone would want to make a movie about him. Stardust, however, isn’t the one we wanted, needed, or considered.

Johnny Flynn (Lovesick and Emma) plays David Robert Jones as he embarks on his first American tour in 1971. He’s young, has a few great albums under his belt, and is already used to reinventing himself. Before he became a megastar, he’d already achieved some success as the guy behind the novelty hit ‘The Laughing Gnome’, the trippy astronaut of ‘Space Oddity’, and singing of ‘The Man Who Sold the World.’ But then there was Ziggy Stardust, and the rest, they say, is history.

Stardust opens with a disclaimer that what will follow is ‘(mostly) fiction’, which feels simultaneously like a cop-out and very Bowie-esque. How do you even begin to capture the intrinsic truth of a man who embraced artifice and slippery performativity at every turn? Mostly, if you’re writer-director Gabriel Range, you reduce it all to a derivative mush that could have been about any musician with long hair and a guitar.

It’s not impossible to do what Stardust is trying to achieve. Sure, this is a biopic of David Bowie hampered by the fact that they couldn’t get the rights to any of Bowie’s music, but neither could Velvet Goldmine, and that movie is a masterful interpretation of Bowie’s ethos and impact, even with the names changed. Todd Haynes understood why Bowie mattered so much, even before he’d really become himself. Stardust gets lost in its own confusion.

For starters, it’s a dishearteningly predictable movie, a straightforward biopic that hits all the expected beats yet never offers a true dissection of its central subject. Flynn is a musician in real life, so he at least looks natural holding a guitar, but his Bowie is a gimmick, a wonky accent and a set of contact lenses that sees costume as the end-all of performance. Mostly, he seems like Noel Fielding without the whimsy. There’s zero charm here, which is a basic failing when you’re playing David f**king Bowie, one of the most hypnotic performers of the past century. When he flirts with a secretary, you don’t for a second believe that she’d be as bowled over by the offer as she is. Imagine a Bowie who you wouldn’t want to have sex with! Flynn is clearly out of his depth with this role, but it’s not as though the material gives him much to work with.

And then there’s his singing. Oh, bless. Look, I know that Flynn has his own band and singing is nothing new to him, but once again, David Bowie he ain’t. The specific, alien-like modulations of Bowie and his emotional depths are out of Flynn’s range. Granted, we never get to hear him actually sing any Bowie songs for obvious reasons, but his interpretations of the songs they could get the rights to are a bit pitchy, sweetie. Flynn seems bored with the music, which is the last thing Bowie ever was, even with his weakest tracks. In one scene, he sings ‘Amsterdam’, a Jacques Brel song that Bowie loved. Brel’s song is, like much of his best work, a piercing wail of emotion. Flynn sings it like he’s forgetting the words as they exit his mouth. Bowie doing Brel should not inspire yawns like he’s a wedding singer telling the crowd he’s going to sing a new song he wrote himself.

Jena Malone plays Angie, Bowie’s first wife and one of the more controversial and frequently overlooked parts of his history. Angie is self-absorbed, pushy, and often walks all over David. She brings the film some much-needed abrasive energy whenever she turns up, mostly to yell at people in the industry who think her husband sucks, then to yell at her husband afterward. Her casting makes sense, but most of the film’s actor choices don’t. Why is Tony Defries, Bowie’s long-time music manager, played by 65-year-old Julian Richings here when Defries was in his late-20s by the end of the ’60s? Marc Maron is suitably Maron-esque as Ron Oberman, the lone American publicist who believes in Bowie’s mainstream abilities, but he was closer to Bowie’s age at the time than what Maron was. Biopics change details all the time but it’s genuinely distracting that everyone in this film is so much older than they were in real life. It makes the film seem even more tired than it already is.

There are moments peppered throughout Stardust where you get the sense that everyone involved knows that what they’re making is doomed to fail. Their exploration of Bowie feels directionless and the miscast ensemble are lost as a result. You get no sense of Bowie’s talent, ambition, or the savvy that allowed him to mold himself, his music, and the surrounding industry machinations into a decades-long art piece that captivated millions. Worst of all, rather than even attempt to tackle the entwined labyrinth of Bowie’s world, Stardust simply reduces it to one family tragedy, a narrative move so cheap that I kept expecting someone from Walk Hard to burst through the doors and scream that the wrong kid died. Bowie was notoriously secretive about his family life, so it feels especially unnecessary and a bit tacky to directly tie his desire to transform into wild new personas to the serious mental health issues of his half-brother, Terry Burns. Not only is it the kind of lazy storytelling that most half-assed biopics thrive on but it’s straight-up bullsh*t. Bowie was playing around with image and expectations long before Ziggy Stardust (the movie pretends that Hunky Dory never happened, which is just baffling from the point-of-view of Bowie’s musical evolution.)

Really, the best way to celebrate Bowie’s life, aside from listening to his music, is by watching the films he starred in. Bowie, on top of everything else, was a brilliant actor and he ably chose roles that both challenged him and made excellent use of his particular kind of charisma. Thinking of Bowie’s film career only makes Stardust even worse because it’s another reminder of how this band biopic is so sapped of everything that we loved and continue to adore about the late great Ziggy Stardust.

Stardust premieres in theaters on November 25.