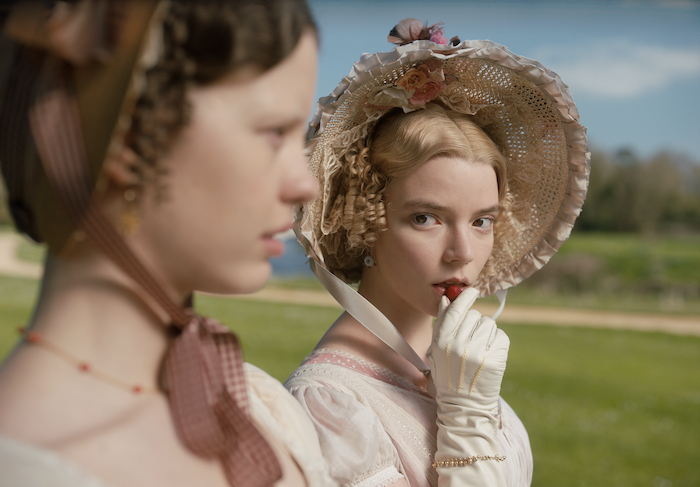 Emma Woodhouse is handsome, clever, rich, and one of the most obnoxious protagonists one can ever hope to find in the literary canon. A 20-year-old gentlewoman of leisure and uncontested queen bee of the bucolic community in which she lives, her favorite pastime is meddling in the affairs of others and then patting herself on the back for a job well done. Jane Austen made Emma vexing quite on purpose, but nonetheless, it was one of the few novels that defeated me at the height of my teenage bookworm powers. Ms. Woodhouse was just… too much.

Emma is the sort of adaptation that feels all the truer to the original author’s spirit because it understands the need to contemporize its commentary. The works of Jane Austen are arguably known best for two things—romance and wit. While adaptations of her work have overwhelmingly maintained their primary allegiance to the former, quite often at the expense of the latter, photographer Autumn de Wilde’s directorial feature debut takes the road less traveled by. It’s a comedy of manners with a deep knowledge of 1810s mores—this film has a credited “etiquette advisor” and it shows—but its eye is utterly and unapologetically 2020.

From a screenplay by Man Booker Prize-winning novelist Eleanor Catton, the latest take on Emma would like you to know that it is the definitive Emma., “periodt” as the youth might say. While many critics, myself included, are ignoring this branding decision in the name of grammatical law and order and our editors’ sanity, this confidence is ultimately well earned.

Up-and-coming superstar Anya Taylor-Joy, who has made a name for herself over the past several years in fiendishly creepy fare such as The Witch and Thoroughbreds, is awfully delightful and delightfully awful as Emma. She’s 100 percent That B*tch, and every once-over, side-eye, and pitying yet mildly disgusted glance at whatever plebian has happened to cross her path is utterly on point. Even if she’s not a character you can truly bring yourself to like, Taylor-Joy makes Emma a person you always enjoy watching.

The casting here is superb overall. Actor-musician Johnny Flynn is an inspired choice for gentleman farmer George Knightley, Emma’s kind-hearted but somewhat unorthodox neighbor and love interest. Flynn brings a refreshing rocker-cool vibe to the character that feels novel yet not out of place. Miranda Hart presents an obvious choice for the good-hearted but comedically tedious spinster Miss Bates, but is no less excellent for that.

The MVP of the supporting cast, however, is without a doubt Bill Nighy, who is an absolute treasure in this and all things. As Emma’s father, a charmingly misanthropic hypochondriac, Nighy steals every scene he’s in. If this film were just two hours of him driving his daughter and the household staff up the wall with his paranoia over a draft that is quite likely all in his head, I would enjoy every second.

In a New York Times interview, de Wilde said she approached Emma in part as slapstick and had the cast watch Bringing Up Baby in preparation. This inspiration is evident in the finished product. The physical comedy might be decidedly more understated than that of the Hawksian heyday—servants entering a room and then backing right out when they realize there’s drama afoot, intricately choreographed pointed glances—but the impact is remarkably similar.

That said, for those who like their Austen films heavy on romance, the tone of Emma might not be the most welcome innovation. Satire and sentiment often make awkward bedfellows, and much like how more earnestly romantic adaptations tone down Austen’s sardonic edge, Emma is far more remarkable as a comedy of manners than a love story. As Emma and Knightley’s relationship evolves, the film tries to play beloved romantic tropes straight with varying degrees of success. The transition from acerbic to sentimental is not an easy one, and while Emma makes the journey with admirable determination it’s still a bit like watching a horse-drawn carriage try to make a u-turn—awkward, cumbersome, and not especially enjoyable for anybody involved. It feels as if the film makes the effort knowing that such content is what a sizable portion of the audience is expecting to see, as opposed to the narrative’s natural inclination. It’s like watching a child who has been scolded into apologizing. They’re saying they’re sorry, but do they actually mean it? Absolutely not.

Emma is delightfully self-aware, even to a fault, but also pleasantly self-indulgent. It snickers at the insular world of the rich and their “problems,” but nonetheless revels in its own luxurious imagery, and what imagery it is. Kave Quinn’s production design and Alexandra Byrne’s gorgeous costumes are top-quality eye candy. De Wilde’s experience as a photographer is evident in the film’s visuals, as she takes no frame for granted; every opportunity to show something beautiful and depict something in a fresh, memorable way is taken.

A sleek, stylish take on an Austen classic with contemporary sensibilities that still remains attentive to the spirit of the source material, Emma is a film that both a Janeite and a more reluctant viewer can appreciate. The film might not have convinced me to try tackling the source novel again, but I enjoyed every minute of time spent with a story that in the past left me grinding my teeth in annoyance, which is no small feat.

← 'Last Week Tonight' Exposes The Lethal Levels Of Islamophobia In India | Let's Talk About ABC's 'The Rookie' (and What's Up with Detective Armstrong?) →